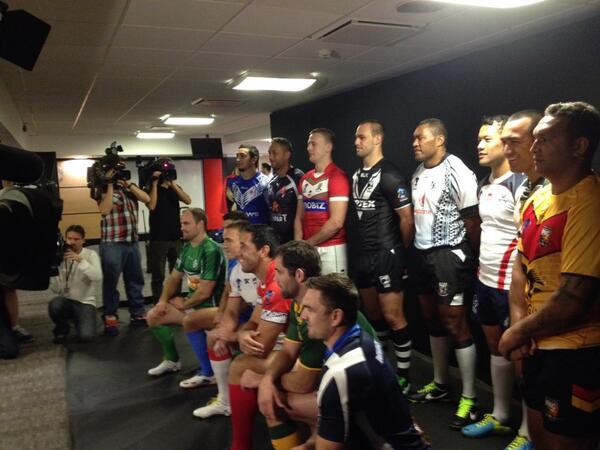 The Rugby League World Cup (RLWC) returns to the spotlight for the first time in five years, with England, Wales, France and Ireland playing host to the competition over the next month.

This tournament is shaping up to be one of the most competitive for quite some time, with the majority of countries assembling strong teams.

Australia – Group A: The Kangaroos are the most successful nation in RLWC history, winning a remarkable nine titles from their 13 appearances. Coach Tim Sheens has selected a very seasoned and settled side, with Cameron Smith taking the reigns as captain.

It will be interesting to see how well the number one ranked team in the world handles the pressure of being the competition favourites. Australia will no doubt use the shock loss to New Zealand on home soil in the 2008 World Cup final as a motivating factor in this tournament.

Key Player – Billy Slater: Slater has held Australia’s fullback position since the 2008 RLWC, when he scored seven tries to be named player of the tournament. He is still a damaging player with his elite run out of defence being crucial to the Kangaroos chances of winning.

England – Group A: England has a grand opportunity to win its first World Cup in front of a strong home crowd. Despite suffering an unexpected one-point loss to Italy in a warm-up game, the Lions should still be regarded as a genuine chance of winning the tournament.

The English haven’t lost to the Kiwis in England since 2000, which will give the playing group a real sense of belief if they should face them in the finals. England’s forward pack is one of the most damaging in the world, with the likes of James Graham, James Roby, Ben Westwood and George and Sam Burgess.

Key Player – Ryan Hall: After another brilliant season with the Leeds Rhinos in the Super League, Hall will need to be at his absolute best if England is to challenge for the World Cup. The destructive winger has explosive pace and is a terrific finisher, registering 13 tries in only 17 international matches since debuting in 2009.

New Zealand – Group B: The Kiwis are striving to build on their heroic 2008 RLWC campaign and defend the title. If there is one team in this tournament that can match it with the might of Australia on the big stage, it’s New Zealand.

Josh Hoffman, Krisnan Inu, Jason Nightingale and Manu Vatuvei make up a stable backline, while there is enormous depth in its forward stocks. Stephen Kearney’s side will have to finally overcome England on foreign territory if it’s to win back-to-back titles.

Key Player – Sonny Bill Williams: Fresh off an NRL premiership with the Sydney Roosters, Williams turns his full attention to helping New Zealand win its second consecutive World Cup title. He has a rare ability to change matches, and his return to the national side will also strengthen the Kiwis back-row stocks.

Fiji: Fiji exceeded all expectations by making the semi-finals in the 2008 RLWC. There are several talented NRL players in the side, including Kevin Naiqama and Akuila Uate of the Newcastle Knights, while former Australian representative Petero Civoniceva has been named captain. Both Australia and England will be massive challenges for Fiji, but expect it to beat Ireland and make it through to the quarter-finals.

Ireland: This will be Ireland’s third consecutive RLWC appearance, with quarter-final appearances in both 2000 and 2008. Despite playing close to home and hosting Australia in Limerick, the Wolfhounds will struggle to advance past the group stage.

France: France was incredibly disappointing at the 2008 RLWC, finishing on the bottom of Group B. It will be hoping for at least a quarter-finals berth this time around. The Chanticleers should be able to achieve this, with very winnable matches against Samoa and Papua New Guinea.

Papua New Guinea: The Kumuls are the weakest team in Group B, despite currently being sixth in the RLIF rankings. Captain and Newcastle Knights player, Neville Costigan, will be aiming to lead his country to a victory, as it went through the 2008 RLWC winless. But with three difficult matches, Papua New Guinea will need to produce its best rugby to obtain that elusive win.

Samoa: This Samoan side has the potential to equal or better its quarter-final appearance in 2000. There is a great deal of NRL class on show, such as David Fa’alogo (Newcastle Knights) Reni Maitua (Parramatta Eels) and Anthony Milford (Canberra Raiders). A win against Papua New Guinea should see Samoa bound for the knockout stage.

Italy: A warm-up win over England will provide the Italian players with a lot of confidence in its first ever RLWC. Both Tonga and Wales should have Italy’s measure, but it is more than capable of defeating Scotland.

Scotland: Scotland will find it hard to progress past the group stage, seeing as it has to finish on top of the group. Both Italy and Tonga will be tough encounters, though it should be able to get a win over the USA in the inter-group match.

Tonga: Tonga has never advanced further than the group stage from its three previous RLWC appearances. This impressive side, led by Penrith Panthers forward Brent Kite, is certainly the pick of the teams in Group C to go on and earn a place in the quarter-finals.

Cook Islands: The Cook Islands is the lowest ranked team (eighteenth) in the tournament. After going through the 2000 RLWC without a single victory, the first match against the USA is its best opportunity of registering its first win in a World Cup tournament.

USA: This will be the USA’s first RLWC after defeating South Africa and Jamaica in the Atlantic qualifying group. The Tomahawks will need a miracle to top Group D, but should be competitive in all three of their matches.

Wales: Much to the surprise of the rugby world, Wales was unsuccessful in qualifying for the 2008 RLWC. With all three of the Dragons’ matches being played in Wales, a spot in the quarter-finals looks very promising.