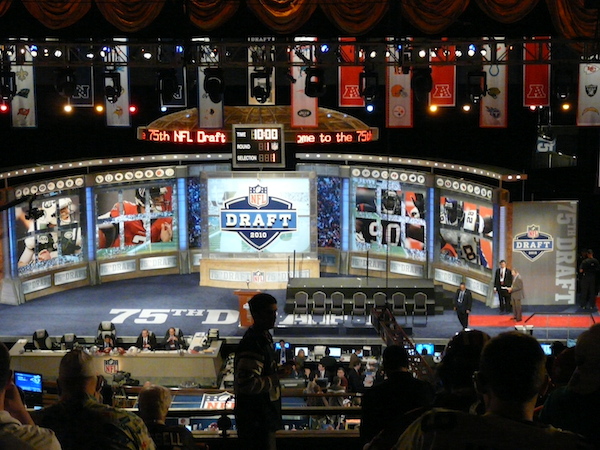 The 2014 NFL Draft has been run and won over the weekend, and what a spectacle it was. With seven rounds held over three days and more than 250 prospects drafted among the 32 different NFL franchises, you may have been forgiven to miss a thing or two. Hence, here are a few key things to take away from the 2014 draft.

Houston Texans did the right thing

They had the number one pick and they did it justice with their selection of defensive end Jadeveon Clowney from South Carolina. He is a freak of nature and has all the attributes to revolutionise his position off the line of scrimmage. With a solid frame at six-foot-five and weighing 266 pounds, astonishingly he ran a 4.53 in the 40-yard dash at the draft combine which ultimately seeled his fate as the number one prospect.

Aside from all his physical attributes, there have been some knocks on his work ethic, dedication and consistency. And no doubt he will be tested thoroughly early in his NFL career, however many have a strong feeling All Pro, former Defensive Player of the Year and now fellow pass rusher, J.J Watt, will have a heavy influence on young Clowney. Receiving a call shortly after being drafted by the Texans, Clowney told reporters that Watt said ‘he’s going to stay on my butt when I get there’.

Johnny Football off to Cleveland

It was arguably the talking point after day one. Quarterback Johnny Manziel from Texas A&M was the first freshman to win the Heisman Trophy, the Davey O’Brien and the Manning Award. He also became the first NCAA player in history to 5,000 total yards and 1,000 rushing yards, and setting the record for total yards of offence at 5,116, which really typified Manziel as the new-age quarterback.

The vibe about this kid prior to the draft was huge. Many experts marked Manziel as the number one quarterback in the draft and to go top-10. Yet, he failed both predictions. Manziel slipped to number 22 in the draft, nabbed up by the Cleveland Browns with their second selection. And was the second quarterback off the board after the shock selection at number three overall by the Jacksonville Jaguars with Blake Bortles.

In a landmark day for American professional sport, the first openly gay player to enter the NFL draft, defensive end Michael Sam of Missouri, was drafted by the St. Louis Rams. It was a long wait for Sam as he was picked up in the seventh round with the 249th overall pick on the final day of the draft yesterday.

Thank you to the St. Louis Rams and the whole city of St. Louis. I’m using every once of this to achieve greatness!! pic.twitter.com/QESdOJVzsw — Michael Sam (@MikeSamFootball) May 10, 2014

The scenes of Sam receiving a call from Rams’ head coach Jeff Fisher telling him he was heading to St. Louis was remarkable. Sam looked tense as he spoke on his phone to Fisher, before being overcome by raw emotion as he broke down in joy and comforted by his partner, as he too wore tears of joy.

He is a SEC co-defensive player of the year and Fisher explained to NFL Network’s Rich Eison it wasn’t a charity pick and that Sam had earned his spot on the roster: “I don’t have any concern whatsoever, Rich, I think you’ve known me long enough. We drafted a good football player,” Fisher said.

“I’m excited to get him on the practice field and get him going so yeah, there’s gonna be a little extra tension for a couple days, but Michael was the SEC Co-Defensive Player of the Year.”

A new era in New England?

The Patriots selected quarterback Jimmy Garoppolo from Eastern Illinois with their lone pick in the second-round. And obviously while superstar Tom Brady remains New England’s quarterback for some years yet, coach Bill Belichick interestingly said ‘with the situation we have at quarterback… I think you’re better off being early than late at that position’ after the pick.

With the uncertain situation behind current back-up quarterback, Ryan Mallet at New England, it could go either way for Garoppolo. He may end up like many back-up quarterbacks to Brady before him picked up in the draft (Brian Hoyer, Mallet) and be second-string his whole career, or things may just fall in place for the talented Garoppolo and we might be seeing the next franchise quarterback for the Patriots.

Jake Keating is a third-year Bachelor of Journalism (Sport) student at La Trobe University and is the sports co-editor for upstart. You can follow him on Twitter: @JKeats10.