Fremantle's Adam Cerra has been traded to Carlton today. 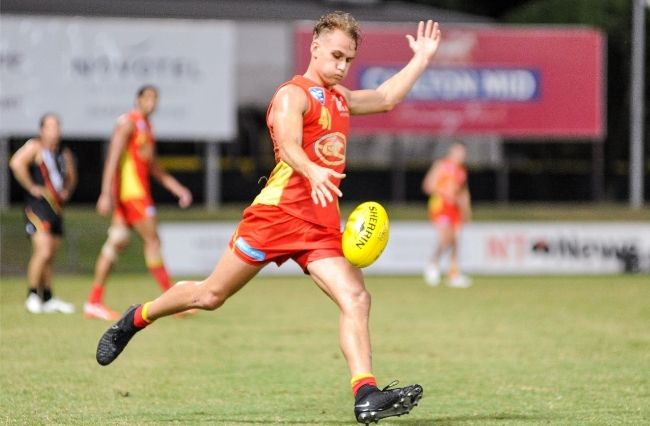 As we enter Day 4 of the 2021 AFL trade period, discussions between multiple clubs look set to continue as numerous players search for a new destination. The initial three days of the trade period resulted in several deals being finalised, including a massive four-way pick swap. Here’s a look to the day ahead and a recap of all the deals done so far.

Today’s trading activity kicked off early this morning, with out of favour Gold Coast midfielder Will Brodie traded to Fremantle in exchange for the Dockers future second and fourth-round selections. The Dockers will also receive picks 19, 61 and 69 as part of the deal, however will absorb the midfielder’s 2022 contract. This comes as Gold Coast looks to create further salary cap space for the coming seasons.

Fremantle player Adam Cerra’s wish to become a Blue has also been granted, with a trade between Carlton and Fremantle finalised today. As per 7AFL’s Mitch Cleary, Fremantle will receive Carlton’s pick 6 in this year’s draft and a future third round selection in exchange for the 22-year-old midfielder.

“So, pick 19 will now be used to unlock the deal for Jordan Clark – at least, that’s Fremantle’s thinking – and by extension, that unlocks the deal for Adam Cerra,” he said on SEN Breakfast with Garry and Tim.

This morning has also resulted in Sam Petrevski-Seton being traded to West Coast who will leave Carlton having spent five seasons at the club. Carlton have received pick 52 in return for the West-Australian.

Today could also see Western Bulldog’s utility Lewis Young seal his move to Carlton, after requesting a trade to the club earlier in the week. After playing only 24 games for the Bulldogs since being drafted to the club in 2016, Young is in search for greater opportunity.

Young’s manager Peter Rhode says that the deal is very close to being finalised.

“They’ve agreed on a pick. I’m very confident by the end of the day Lewis will find his way to Carlton,” he told AFL Trade Radio this morning.

Other trades which are still in the works include Jordan Dawson’s request to join Adelaide, with Sydney playing hard ball over a possible trade for the 24-year-old.

The Swans reportedly want a top five pick for the South-Australian, with Swans football boss Charlie Gardiner telling SEN the club believes Dawson is “arguably the best player on the market in the AFL at the moment”.

However, Adelaide is currently not willing to part ways with its prized pick 4 in any deal for Dawson, meaning the two clubs find themselves at a roadblock.

Hawthorn’s Tim O’Brien has also been closely linked to the Western Bulldogs, who have reportedly shown interest in adding the 27-year-old to their squad. The unrestricted free agent is currently without a deal for 2022 and could also be joined by Jon Ceglar in exiting Hawthorn as the 30-year-old ruckman was told to explore his options earlier this week. Geelong and the Western Bulldogs are reportedly the most likely suitors for Ceglar’s services.

North Melbourne and Richmond look set to continue to negotiate deals for ruckman Callum Coleman-Jones and defender Robbie Tarrant, with both players indicating their desire for a fresh start. Meanwhile, North Melbourne ruckman Tristian Xerri has requested a trade to St Kilda.

With the trade period already in full swing, here is a summary of all the done deals:

Photo: Will Brodie playing for the Gold Coast Suns’ reserves in May 2017 by Flickerd available HERE and used under a Creative Commons Attribution. The image has not been modified.