As the owner and winemaker of Main Ridge Estate, Nat White established the first winery in the Mornington Peninsula. He’s also widely recognised by his peers as one of the most important producers of Victorian wine.

Surprisingly few outside of the winemaking community are aware of the career that the West Australian has quietly carved out on the Peninsula. To gain some insight into the career of this local pioneer, I meet him at his cellar door early on an unreasonably idyllic spring morning.

Wine was a second career for White, who was originally employed as a civil engineer. During the mid-60s, White was based in London with his wife Rosalie, and the couple made regular sojourns throughout Europe.

Despite little prior knowledge of wine, a visit to Burgundy struck a particular chord for the intrepid travellers.

‘I think I saw a model of life that was different,’ says White.

‘It was based on the rewards of producing something that’s the best you can do. It’s quite different to saying “there’s a market out there I want to satisfy and make some money out of it”.’ 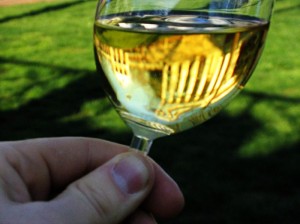 A glass of chardonnay (Image: Rob Gurtich via Wikimedia commons)

Burgundy is the home of pinot and chardonnay, the two grape varieties that White would dedicate more than three decades to understanding. But as he stresses in our interview, the attraction was as much for the Burgundian lifestyle as it was for the stuff in the glass.

‘We also found this idea of small Domaines where they owned their own vineyards, often for many generations. I could see that the local winemakers acted and looked more like farmers than sophisticated wine producers. They knew nothing about marketing, but they seemed to do alright,’ he says.

Once White returned to Australia, he began searching for a place to put this revelation to work: his own little patch of Burgundy down under.

In 1975, White purchased a failed lemon orchard near Red Hill, largely because it was cheap due to a lack of road access. The first vines were carried up the hill by hand, and planted with the help of the local orchardist community.

In a bizarre stroke of luck, this failed lemon orchard has since been revealed as one of the great vineyard sites in Victoria. White is forthright in acknowledging the role that such good fortune has played throughout his career.

‘If I had to now search around for a block of land [on the Peninsula], I don’t know if we could find anything better. We were extremely lucky,’ he tells me.

White’s luck goes deeper than just the plot he purchased, as the Peninsula itself has been recognised as highly suited to the production of his favourite Burgundian grapes: pinot noir and chardonnay. The fact that he selected an ideal site and region to grow his favourite wines with essentially no guidance at all is breathtakingly serendipitous.

This slightly haphazard approach is an exception to the rule in the world of fine wine. By comparison, consider the career of Brian Croser: a pioneer of his own Australian wine region, and someone who White cites as a great influence.

Croser famously poured over maps of the Adelaide Hills as he tried to pinpoint the perfect site to establish his winery, Petaluma. Only the bravest soul would suggest to him that any element of chance was involved in the success of his winery.

Nominating Croser – who established the winemaking degree at Charles Sturt University – as a guiding influence on his career is a curious selection from White. They were essentially contemporaries; establishing both of their now famous vineyards in 1975.

The greatest imprint that the South Australian made on White was clearly his fondness of detail, something that certainly appealed to the civil engineer.

This fastidiousness is made apparent when I raise the topic of terroir: a high concept term that loosely translates to how a wine expresses its site. Many producers reference terroir when speaking about their winemaking approach and philosophy.

Nat has worked with the same site for over 35 years, and admits that it took him at least ten to understand its quirks and characters. But when I ask about the influence terroir has had on his winemaking, it’s clear I hit a nerve.

This obsession with fault-free winemaking is the clearest indication of how Brian Croser, through White’s commitment to fine details, has influenced the Main Ridge wines.

White clearly sets a high bar for the quality of his wines. 2011 was a famously difficult vintage for winemakers on the Peninsula, and although many wineries are currently releasing some questionable wines onto the market, Main Ridge are not.

As we walk through his vineyard after the interview, White points to the driveway that winds away from the winery, and notes he has already tipped many barrels from the troublesome vintage down the gravel track.

Considering each barrel contains more than two years’ worth of hard work, and significant monetary investment, the cost of such commitment is extreme.

Economic factors have played little influence on White’s winemaking, much like the market forces that drive many sweeping changes through the wine world.

Both grape varieties that White works with are prone to change, and his three decades have seen wildly different styles come in and out of vogue.

Unsurprisingly, none of these shifts have swayed the Main Ridge style in the slightest, as the winemaking recipe has stayed unchanged for the better part of two decades.

I finish by asking White about the future of the estate, which is unclear given that none of his children are interested in wine. His response is unsurprisingly modest.

‘We’ll stay here as long as we can. There’s no succession plan, we’re just here until we drop,’ he says.

‘I would hope that someone would come along and continue it on. We have, by chance, a special site. If someone else takes it on, they might be able to do things a little better. There’s always that possibility, I think.’

Eric George is studying a Graduate Diploma of Journalism at La Trobe University.  You can follow him on Twitter: @ericpaulgeorge