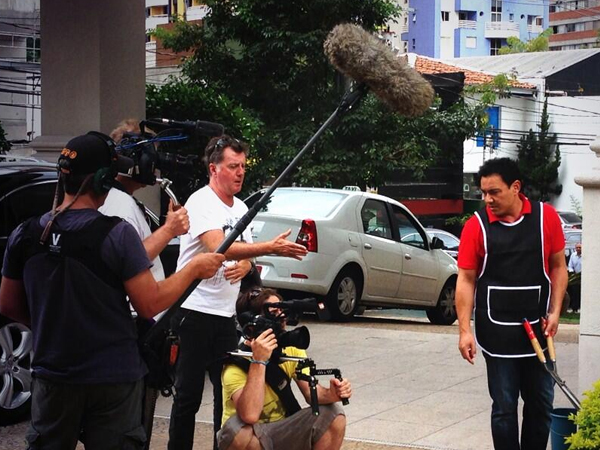 It’s the first hour-long episode of Santo, Sam and Ed’s Total Football, and the co-hosts are revving up their audience with a quiz and ‘Diego Maradonut’ Krispy Kremes mere seconds before going live to air.

It doesn’t matter what sport they’re covering, or which network they broadcast on, people love to tune in to watch Santo, Sam and Ed tackle the week’s on and off field news with their endearing blend of wit and self-deprecating humor.

During the show, the hosts, crew, the odd Socceroo and an audience all perform their roles, but the vibe in the room isn’t one of stress or pressure. It seems like everyone’s all there to have a laugh, including the Floor Manager whose chuckles are louder, and at more inappropriate times, than any one else in the studio.

And there’s no doubt who gets the most laughs: Sam Pang.

Pang’s not cut from the commercial mold like many of his television contemporaries. Humble beginnings in community radio have lead to a successful career in television as a Eurovision commentator, Agony Uncle and co-host of Santo, Sam and Ed among other panel gigs.

He can take a joke and do just about any comedic gig on TV or radio, but just don’t make a joke about him playing for Collingwood and being a Carlton supporter. ®

His love of Carlton and broadcasting career allowed Pang to get what he describes as “the best job in the world” driving around filming interviews with former and current players.

“I feel as though when I’m talking to them that they’re mildly distracted, that their guard’s down.”

“So by them driving means that they’ve got to concentrate on the road and therefore, I think they’re pretty open. I think it’s a pretty good way to interview people because they’re doing something and they’re mildly distracted by my questions, which are sometimes pretty ridiculous.”

After the stint at Collingwood, Pang had a series of other “odd jobs” including bieng a waiter at the Spaghetti Tree with Julia Zemiro, who he reunited with a decade later to co-host Eurovision.

He then began presenting a segment on what was then a radio show on 3CR, the Marngrook Footy Show. That led to further appearances on 3CR and eventually to hosting the Triple R breakfast show, Breakfasters.

Pang’s community radio beginnings have followed him throughout the years, at one point during the Total Football episode Ed Kavalee yelled at Pang to “go back to community radio”.

“I think it’s hilarious that Ed, every now and then, throws community radio back at me. It’s a badge of honor! [chuckles] Ed’s from a different world, he’s from commercial radio,” he says.

“I couldn’t speak more highly of community radio and what it does because, it doesn’t matter where you end up, and we’re all doing different things, but it’s just a great place to go and find out if you like doing radio.”

Co-host Santo Cilauro also began his broadcasting career in community radio, and met Sam when he was promoting Working Dog productions on Breakfasters.

“On air we seemed to enjoy each other’s company and then I got a call from him saying he wants to do a show and he wants to do it with me and Ed Kavalee, and I go, well, that sounds good to me!”

Preparation for a Tuesday night broadcast of Total Football involves a meeting on Friday before the weekend games, a Monday debrief and production on Tuesday during the day.

And watching football. Lots of it.

“Our Executive Producer Michael Hirsh and Working Dog, I think they’re constantly trying to get us to watch less but you can’t stop Santo and Ed watching soccer.”

On air and in between takes of Total Football, the three of them seem to get on quite well.

But what does Pang really think of his co-hosts?

“[Ed is] undeniably funny, but I like his work ethic. I mean he works really hard and he does try to get the best out of himself. I think that’s something I could learn from [laughs].”

“And then Santo, you know well he’s an icon…. you just have these moments where, he either rings you and asks you something and you just go wow, why would he even care what I think?”

Pang says trust is vital to the trio’s onscreen dynamic.

“I don’t feel under pressure if something goes flat then you know the other two are going to pick you up so that’s always a nice feeling of comfort, especially with me it’s always good, because it happens a lot.”

“I’m pretty sure that they’ll be a massive break up soon, which I’m looking forward to as well, you know what I mean?”

“I’m sure there’s a massive break up like, I’m trying to think, you know like Martin and Lewis? That’s a very old reference, you probably wouldn’t understand that, don’t worry.”

For the record, I didn’t.

“I’m enjoying the time that we’re spending together,” Pang says, before adding, “and I’m looking forward to it ending.”

Santo, Sam and Ed is broadcast at 7.30 pm Tuesday on Fox Sports 1 until May, or until they break up.

Rachael Ward is a first year Bachelor of Journalism student at La Trobe University. You can follow her on Twitter @missrachaelward