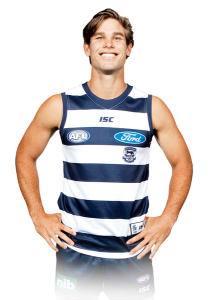 Geelong’s power forward Tom Hawkins has emerged from that dangerous word ‘potential’ and transformed into a bona fide star. A physically imposing, goal-kicking machine, the ‘Tomahawk’ is a genuine match-winning weapon.

But for the majority of his AFL infancy, it was unclear whether the consistent brilliance we are witnessing now would ever be fulfilled.

Kicking three goals in an impressive debut against Carlton in 2007, then Blues coach Denis Pagan suggested Hawkins would be the next Tony Lockett. However, as the years progressed, Hawkins barely even managed to maintain his place in Geelong’s best 22, let alone reach the heights of the game’s immortals.

More recently at the start of the 2011 final series, Geelong were back to their menacing best. Tall-forward James Podsiadly was the mature aged recruit of the season and only one query remained over the Geelong juggernaut: Could Tomahawk stand up in the other key forward post in the absence of club stalwart Cameron Mooney?

The emphatic answer was yes.

Hawkins overpowered Hawthorn’s Ryan Schoenmakers in the qualifying final and was equally influential against West Coast in the preliminary final. Yet it was his Grand Final performance against Collingwood that truly announced his arrival.

While Magpies defender Ben Reid was clearly hampered by injury for a significant portion of the match, Hawkins’ three goals and nine marks were still against an All-Australian player and nearly earned him Norm Smith medal honours in the 38-point victory.

Constant criticism had been directed at Hawkins for a variety of reasons, both fitness and form related. There was a stage where his flaws appeared to outweigh his attributes. Now having blossomed into a highly valuable commodity, that ratio and perception has certainly flipped.

Throughout the 2012 season, Hawkins has been the front-half focal point for Geelong and a thorn in every opposition defence. Injuries to James Podsiadly has thrust Hawkins further into that spotlight and having embraced the responsibility, he has become arguably the most effective power forward in the competition.

While his average disposal rate has been largely unchanged for five seasons, going from 11.9 in 2008 to 12.6 in 2012, the change in impact on the contest has been undeniable.

With 54 goals this season, up from 27 in 2011, Hawkins is 4th on the Coleman medal tally. Goal conversion is clearly the most stark improvement in his performances. An average of 6.7 marks per game, up from 4.7 in 2011, is also indicative of his strong presence and highlights his greater understanding of how to use his body in an aerial duel.

The pattern of development shown by Hawkins is common to many tall-forwards, with the position still widely regarded as the most difficult to thrive in.

The switch from whipping boy to revered gun makes you wonder what could have happened to Hawkins if his rapid development hadn’t arrived yet. Remember, he’s still only 24 years old.

Perhaps the weight of scrutiny would have pushed this immense talent onto the trade table or AFL scrapheap. It begs a broader question: How many times have we pulled the trigger on tall-forwards too fast in the past?

Former Essendon forward Jay Neagle springs to mind. Removed from the senior list at the end of 2010, Neagle showed glimpses of quality football, but couldn’t put it together consistently.

Fitness and form issues along with queries on his attitude ultimately proved to be his downfall, so in many ways the blame rests with him. However, with some added maturity, the possibilities could have been similar to the same aged Hawkins.

Matthew Little is also an interesting story. Having only played one AFL match for Hawthorn before being delisted in 2007, Little was hardly given the chance to show his worth.

Appling himself in the VFL for Williamstown, Box Hill and now Bendigo, Little booted 84 goals to win the Frosty Miller medal in 2010. Being such an accurate kick, the cousin of James Hird is another that could have conceivably made an impact at the top level.

There are many examples of players who may have been cut before the realisation of their elite football prospects. With no way of definitively proving these cases right or wrong, it all lies in the eye of the beholder.

But there is no doubt that the AFL industry’s desire for instant gratification, particularly from top draft picks, often creates unfair expectations on key forwards that are immature in body and experience.

Lachlan Hansen, Tyrone Vickery, Patrick Ryder and many more have carried the weight of the football world on their shoulders at one time or another.

You would imagine in the current climate that young forwards like Johnathon Patton and Sam Day will have the blowtorch applied to them at some point within the next 24 months. It is an unjust reality of the football environment.

Ahead of his 99th game against the Western Bulldogs this week, Hawkins is proof that talls tend to take time, and when given the opportunity to grow, the club and player can reap huge rewards.