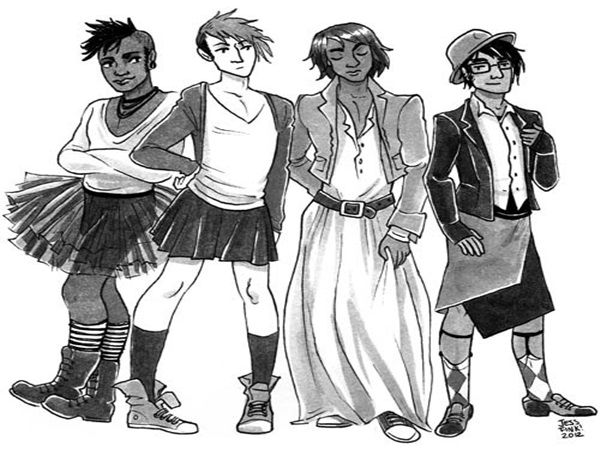 It’s 5:30pm and Shannon has just arrived home from work, covered in dust, mud and wood shavings – he’s a tradie. Instead of winding down and watching TV on the couch, Shannon is off to play netball.

Since childhood, Shannon has hated everything about his male body and believed he was born the wrong gender. He realised from a very young age that he was “not like the other boys” in his small country town.

Shannon suffered bulimia, extreme self hatred and alcoholism, by age 15.

“I was a teenage alcoholic. I would go through three slabs of beer in a week,” says Shannon.

Every waking moment throughout his teenage years was spent “thinking about being a woman” and wishing he could escape his own body.

Shannon has kept his female identity a secret all his life, out of fear of his conservative family’s reaction. Overcompensating by being the ultimate “blokey bloke”, Shannon fixes computers, services cars, flies lightweight airplanes and works as a builder. He does this to justify his masculinity, eliminating doubts people may have about his sexuality.

It wasn’t until his 20s, when he moved to Melbourne and met his long term girlfriend Jenna, that Shannon built up the courage to embrace his desire to be female.

Jenna met Shannon when he identified himself only as a man, but just weeks into their relationship Jenna had to accept the fact that her boyfriend would soon become her girlfriend.

“While Shannon still presents himself as male in the workplace, he is female whenever he is at home or out with friends,” she says.

In fact, Jenna rarely sees Shannon dressed as a male. It’s only briefly when he comes home from work, and even then he rushes to the bathroom and promptly changes into female clothing.

But for Shannon, dressing up and putting make-up on has never been enough.  He recently made the life changing decision to begin hormone replacement therapy.

Over the coming months, Shannon will experience a number of changes such as the development of breasts, potential weight gain in his hip and thigh areas, softer skin, a higher pitched voice, increased appetite, penile dysfunction, lack of sperm production and increased risk of blood clots.

The decision has serious implications for Jenna. She will not only witness her partner’s physical transformation, but must also accept that they will be unable to conceive a child naturally, without IVF treatment.

While the process is understandably hard for Jenna, Shannon has her full support. She says she “fell in love with the person Shannon is and not his gender”.

“The problem with society is that they don’t understand how gender and sexuality are two very different things,” she says.

According to Dr Ann-Maree Nobelius, sex refers to biological differences in sex organs, gender describes “the characteristics that a society or culture delineates as masculine or feminine”.

While Shannon’s sex is physically male with a straight sexual orientation, his gender is female.

Compared to homosexuality, transgenderism is still taboo in Australia and is not understood or openly acknowledged by mental health professionals or the general public.

There is no census data on how many people identify as transgender, because there isn’t a small square box that makes such a differentiation possible.

Shannon relied upon online forums to learn about transgenderism and the experiences other people had with becoming female, whether it be through hormone therapy, a sex change or both.

He realised that most of the people on the forums suppressed their transgenderism until their 50s, after having children and getting married. Waiting another 20 years to reveal his true self was not an option for Shannon, who is looking forward to the life he has always envisaged for himself but never thought was possible.

After spending over $20,000 on laser hair removal, hormone therapy, psychiatrists, doctors and blood tests, Shannon has finally reached the point of no return.

Although he hasn’t told his family, he is optimistic that over time they will accept him as a woman.

“Despite the struggles that go with it all, it’s all worth it. I’m the happiest I’ve ever been,” he says.

*Shannon and Jenna’s real names have been changed for privacy reasons.

Emily Gook is a third year Bachelor of Journalism student at La Trobe University and a staff writer for upstart. You can follow her on twitter here @EmilyGook