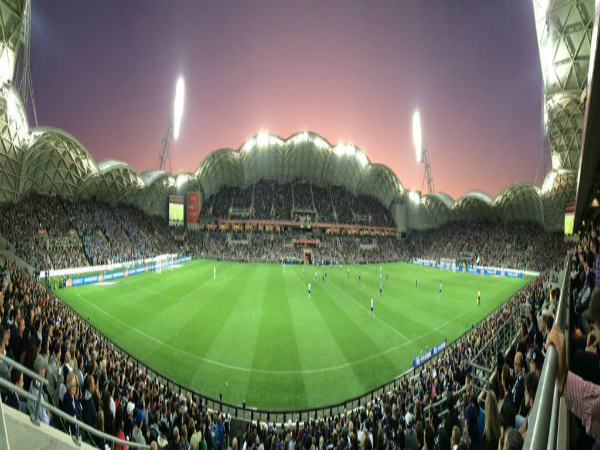 Melbourne Victory defeated Sydney FC 3-0 to be crowned A-League Champions in front of a near capacity crowd of 29,843 on Sunday.

In the lead up to the match there had been uproar surrounding the inability to host this match at Etihad Stadium.

The matter was beyond Football Federation Australia‘s control because priority for Etihad Stadium is given to the AFL between February and September, as per the user agreement signed when the venue first opened.

The round seven clash between the Western Bulldogs and Fremantle therefore took precedence and was held at Etihad Stadium in front of 18,170 fans.

Even still, in an era of hyper-commercialised and revenue-centric sport, the A-League was able to inadvertently provide a mainly member-based final due to the limited capacity of AAMI Park.

The restricted crowd capacity for the final meant a substantial percentage of tickets were allocated to members of the competing sides, with only some earmarked for corporate use.

Around 85 per cent of the total tickets were made available to both Melbourne Victory and Sydney FC members. These statistics are especially favourable when compared to the 2014 AFL grand final where around one-in-five seats were reserved for corporate members.

On this front, the round ball code could be seen to be bringing the game to the people. However, given that Melbourne Victory’s membership tally for this season is 24,095, there will be some members who missed out on attending.

An inability to cater for all members due to the size of AAMI Park was a clear disappointment for the A-League and something that baffles football historian Dr Ian Syson.

“The semi-final final last weekend was massive so it seems bizarre to have the final the next week in a stadium half the size,” Dr Syson tells upstart.

The Melbourne derby semi-final drew over 50,000 fans to Etihad Stadium, a crowd figure that surely would have been replicated in the final had the venue been able to accommodate it.

An alternative could be to designate a stadium each season to ensure this particular problem doesn’t reoccur but there are concerns regarding this.

“The tradition is to give the final to the team that has earned the right to host it,” Dr Syson says.

“You could do what they do in the UEFA Champions League and allocate the ground at the beginning of the year but what happens if we hold the final in Sydney but Wellington and Perth make it? I don’t think the A-League is lodged in people’s minds that much yet.”

An inability to hold the event at Etihad Stadium gave the league a chance to show off Melbourne’s premier rectangular stadium on the biggest stage in the domestic football competition. The atmosphere around AAMI Park was electric and the close proximity of the stands to the pitch makes for excellent viewing.

“I think you do right to see there’s a possible silver lining; the idea of an intimate grand final is good,” Dr Syson says. “It is a better stadium than Etihad. That’s the good thing about a grand final being held there, but it’s also a revenue thing, it’s a publicity thing.”

“I think it does point out though that Melbourne needs a 40,000 seat rectangular stadium that can be called on by any of the rectangular codes.”

Despite this being somewhat of a backwards step for the competition, it’s highly unlikely that confusion regarding a suitable venue for future finals will resurface as the FFA is already looking to lock in a date for the 2016 A-League grand final.

The round ball code had no choice but to take a back seat to the AFL on this occasion but the statistics regarding the television audience for the final demonstrate that the A-League continues to grow stronger each year.

It may not be long until all footballing codes reach an equilibrium in Australia.

There’s no need to dwell on the negatives from the stadium debacle as this might be the last member-based grand final we see for a while.