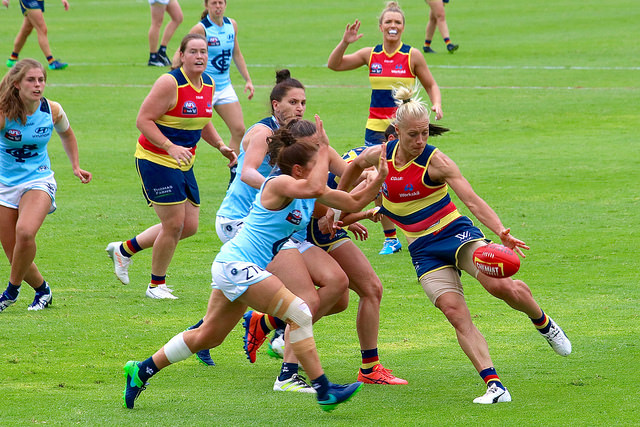 The AFL has announced a new structure for its 2019 NAB AFL Women’s season, with a conference system to be put in place.

In what will be the third season of AFLW, the league will separate the 10 clubs into two conferences.

The season will begin on the first weekend of February, no different to the opening two seasons of the women’s competition.

The structure will see teams play four opponents in their designated conference, as well as three games known as ‘crossover games’ against teams from the opposing conference. The ‘crossover games’ will be marked out and announced by the AFL in October, accompanied by the full fixture.

Overall, the season will run for a nine-week period.

The top two teams from their respected conferences will face off in a preliminary final to decide who will meet in the Grand Final the following week.

“We haven’t gone with nine home and away games (for 2019) because we recognise that a finals series was determined by the playing group as something they wanted.”

In 2018, the Western Bulldogs won their maiden AFLW premiership. With North Melbourne and Geelong set to join the league as the expansion teams.

Whilst the final conferences are yet to be determined, a foundation will be drawn based on last year’s final ladder. AFLW will be separating the top-two teams from last year (Western Bulldogs and Brisbane), the bottom two-teams (Carlton and Fremantle) and the new expansion sides (North Melbourne and Geelong) to begin positioning for conferences.

The AFL is yet to announce how the matches will be shown, with a new broadcast deal under negotiations by AFL Chief Executive Gillon McLachlan.

All 10 clubs have the opportunity for rookie signings in the month of September, before the NAB AFLW Draft on October 23 at Marvel Stadium – with Geelong responsible for the first two selections.