Gillon McLachlan believes that Nathan Buckley’s suggestion to strip journalists of media accreditation for false stories is a good idea. 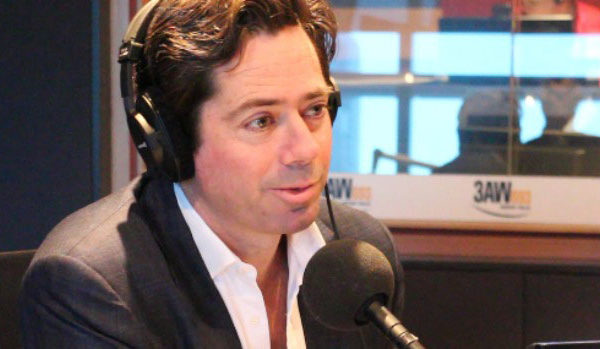 AFL CEO Gillon McLachlan says that stripping journalists of their media accreditation is ‘quite a good idea’, in order to hold them accountable for ‘making stuff up’.

“Taking accreditation away seems to me to be a fairly logical outcome,” McLachlan told 3AW. “I think it’s worth looking at.”

It comes following Nathan Buckley’s suggestion earlier this week that the AFL should look into taking media accreditations away for providing untrue stories, after Brad Hardie reported that Ross Lyon and Collingwood were in discussions about Lyon becoming Collingwood’s next coach.

Speaking on 3AW this morning, McLachlan was in favour of the notion put forward by the Collingwood coach, saying that it was an idea that had to be considered.

“I think there is responsibility everywhere. Our players, coaches, officials, everyone is held incredibly accountable every day – but we are also talking about people’s livelihoods and careers and this allegation talks to integrity.”

McLachlan emphasized that he was not talking about opinion pieces, but about stories that were “completely wrong” and are having negative consequences on the names in question (in this case, Buckley and Lyon).

McLachlan believes journalists hold a responsibility and accountability to be “as accurate as they can”, rather than posting inaccuracies.

“The urgency of a reducing media cycle means that people are going earlier (with their stories) than they used to” McLachlan said.

“The concept of being accountable for what you say, which is essentially what Nathan was saying, I think was the right one.”

According to Buckley and Collingwood President Eddie McGuire, the story put forward by Brad Hardie was a “complete fabrication” and “just made up”.