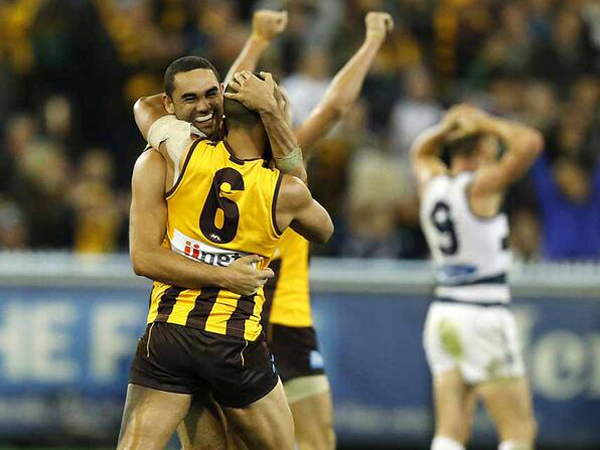 With the preliminary finals for 2013 now run and won, football fans on both sides of the Nullabor will have a nervous week ahead of them, as they wait for the last dance of the AFL season.

With just one match remaining there are still plenty of players who are able to take home the AFL Finals MVP award, something to rest in the trophy cabinet alongside the Brownlows and premiership medallions of any AFL player.

Johnson’s first quarter provided the spark for Geelong. He started with eight disposals and two goals, as he filled the void left by fellow veteran Paul Chapman. Even with added attention from Hawthorn’s run-with player Liam Shiels after quarter time, Johnson accumulated 32 disposals and kicked four goals in a display that oh-so-nearly got the Cats to another Grand Final.

The Hawks’ backup ruckman played a game as big as he is tall on Friday night. Hale played around the ground and was Hawthorn’s most dangerous key forward, with Lance Franklin and Jarryd Roughead being soundly beaten on the night. He took a game-high three contested marks inside the forward 50, while also amassing a best afield 18 hitouts. Hale finished with two goals, as well as providing two assists in a performance that reaffirmed his importance to Hawthorn’s structure.

Sam Mitchell’s composure was outstanding against the Cats, finishing the match with a game-high 38 disposals, only two of which were clangers. Hawthorn needed Mitchell to really step up against the Cats’ experienced midfield, and the former captain duly delivered with 11 clearances, nine of those from the centre. His 14 contested possessions were highlighted by a late collision with fellow Hawk Jordan Lewis, demonstrating his desperation to not surrender their side’s fourth quarter lead.

In his most influential game for the club, Shaun Burgoyne lived up to his nickname of ‘Silky’ with 24 disposals, three goals and a fourth quarter that dragged his team over the line. Burgoyne tackled Jimmy Bartel in the square to set up the Bradley Hill goal which kept the Hawks in it, before warding off Andrew Mackie to assist Jack Gunston score a crucial goal. Fittingly it was Burgoyne who kicked the sealer to send his side into the Grand Final and end the Kennett Curse.

After an impressive display in Geelong two weeks ago, Nick Suban again provided a relentless attack on the ball, both down back and inside forward 50, earning 14 disposals and an unlikely two goals along the way. Incredibly, 12 of Suban’s possessions were contested which has earned him his first votes of the finals series.

Fremantle’s captain and arguably greatest ever player stood up when his side needed him most on Saturday night. Pavlich’s presence worried Sydney’s defenders, as he took three marks inside 50 and finished with two goals in a performance that was a true captain’s game.

Assigned to damaging Swan Kieren Jack, Crowley restricted Jack to just 11 disposals, while acquiring a goal and 22 disposals of his own. In one of his best negating performances of the year, Crowley easily accounted for one of the Brownlow medal favourites, and in the process nullified the Sydney midfield’s potential to hurt the Dockers going inside 50. A mouth-watering match-up with Hawthorn’s Sam Mitchell awaits him on Saturday.

Fyfe again proved that he is at home on the big stage, playing a brave style of finals football to finish with 27 disposals, including a game-high 15 contested possessions. Fyfe’s work in the air was outstanding, as he continually cut off Sydney’s forward forays. He also excelled inside 50 where he took three contested marks. With six clearances and an invaluable four one-percenters, Fyfe well and truly deserves the four votes here.

With Saturday’s Grand Final fast approaching, the leaderboard suggest up to 10 players are still a chance for the MVP:

Justin Falconer is a second-year Bachelor of Journalism (Sport) student at Melbourne’s La Trobe University, and is a weekly contributor to upstart. You can follow him on Twitter at @jfalconer6.