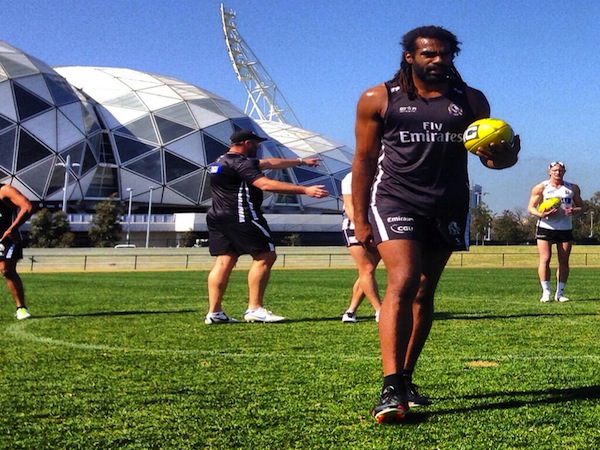 Collingwood will begin its finals campaign against Port Adelaide, this Saturday night at the MCG.

The Magpies have finished the 2013 season in sixth position, which is the lowest that they have finished since scraping into eighth spot in 2008.

Injuries to key personnel and poor defensive pressure has led to Nathan Buckley’s men missing out on the double chance this year. They will need to improve their defensive game if they want to make an impact in September.

What a day to start our finals campaign! @harry_o and co are looking sharp at training out on Olympic Park #gopies pic.twitter.com/N5g9bbdFgq

A number of injuries to integral players has tested Collingwood’s depth this season, with Alan Toovey, Alex Fasolo and Marty Clarke missing the majority of the season. Unfortunately the injury trend continued throughout the season, with new recruit Clinton Young, and key players Dayne Beams, Dale Thomas, Darren Jolly, Harry O’Brien, Luke Ball and captain Nick Maxwell all requiring time on the sidelines.

The consistent restructuring of the Collingwood side saw varying performances throughout the year. Impressive and sometimes flawless football, against Geelong and Sydney, had experts believing that the Magpies could win the premiership from outside the top four. Those beliefs have been questioned with losses to Hawthorn, Gold Coast and their upcoming opponent Port Adelaide.

Collingwood will be buoyed with the pending return of a few first choice players. Premiership duo Luke Ball and Darren Jolly will bring much needed finals experience to a line-up desperate for quality inclusions. Alan Didak and Dayne Beams have used the last couple of games as a warm up for the start of the finals and have timed their runs well.

Swingman Ben Reid has been a revelation this season and is a key match-up for opposing coaches when he goes forward. Forward Travis Cloke found his kicking boots last Sunday after he booted five goals against North Melbourne and narrowly missed out on the Coleman Medal. And midfield stars Scott Pendlebury and Dane Swan are poised to continue their amazing run of form.

The Magpies know how to get up for the big games and nothing is bigger than finals football. Their attack and pressure against Geelong and Sydney showed the rest of the competition that they are a serious contender. The quality playmakers for Collingwood provide valuable drive for the side going forward. But it is the side’s depth that is quite impressive, with young ruckman Brodie Grundy and forward Ben Kennedy playing pivotal roles this year.

2013 has been a rollercoaster year for the black and white faithful. The reshuffling of the team at times has not allowed the Magpies to develop continuity, and leading into a finals series this is vital. Nathan Brown, Quinten Lynch and Ben Reid are all sore from niggling injury concerns but should be fine to play. Dayne Beams, Darren Jolly and Alan Didak have not played a lot of football this year and may not have the same impact as they once had in previous years.

Defensive lapses have the potential to expose a team that used to pride itself on its capacity to negate the opposition. This was the cornerstone to its 2010 premiership, when Collingwood was one of the best defensive units in the competition. This current line-up, which is not grossly different, is in stark contrast at the moment.

The exciting Brodie Grundy may be entrusted to take on the number one ruck role. The influence the 19-year-old has had should not be underestimated, however finals football is a completely different challenge. Should Grundy play this weekend, there will be a lot of weight on the young man’s shoulders.

Scott Pendlebury is the player to look out for. His gallant effort against North Melbourne again showed that the midfielder does not just rack up the possessions, but he can also kick goals. Pendlebury’s decision making is elite and his ability to react swiftly in congestion is incredible.

Port Adelaide has played attractive football this year and the club has been completely rejuvenated on and off the field. However, Collingwood has much more firepower in all areas of the ground and looks set to begin its finals campaign with a hard fought win.

If Buckley can tighten up the defensive structures, then the Magpies could threaten to take out the premiership. History does not favour Collingwood, considering that the last team to win the premiership outside the top four was Adelaide in 1998.

However, its best is brilliant, but its worst is very ordinary. If the Magpies win on Saturday night, they will play the loser of Geelong and Fremantle which is a tough ask. But if there is one team that should not be discounted it is Collingwood.

Sean Munaweera is a second year Bachelor of Journalism (Sport) student at La Trobe University. Follow him on Twitter: @sean_muna