With the introduction of a women's competition, the AFL is making leaps for women's football.

Australian rules football is a staple of Australian society; it’s a tough ask to find a Victorian who doesn’t follow a team.

The culture that exists within football has generally always been masculine. Even though women have been a part of the crowd since the beginning of the Australian Football League, they aren’t on an even playing field when it comes to competing in the sport.

Despite serious attempts by the government to level the playing field for women in sport with the introduction of the Sex Discrimination Commission in 1984, and the Women’s Sports Promotion Unit in 1986, the divide between men’s and women’s football still exists.

The ideal of a fit, healthy footballer is of course typically associated with males. Often overlooked are the equally hardworking and healthy women who also participate in the game, although in a far less equal and recognised role.

In 2013, Celeste Liddle of The Guardian wrote that while issues such as racism receive much deserved public attention, sexism is still alive and well in the AFL.

“…Generally speaking however, and regardless of the fact that women currently make up a third of the members and up to a half of the viewers, the culture of the AFL remains sexist and exclusionary,” she wrote in 2013.

“It fosters “mateship” over justice and human rights. When woman aren’t decorative, they’re locked out or stood against.”

However with the recent introduction of football academies aimed at young girls, there has been a related rise of females playing football.

Rebooted in 2016, The Victorian Women’ s Football Academy provides players with access to training at AFL club facilities for nine months, with the opportunity to participate in detailed training programs including kicking, strength conditioning and nutrition.

Paxman has been working with the Victorian Women’s Football Academy, which trains up the next set of players.

“This year I’ve been involved in the academy, which is being used as a pathway to the AFL,” she tells upstart.

“Making sure that there is a high level of skill amongst the female players with help from their coaching and support staff is absolutely essential.” 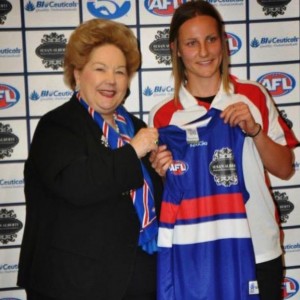 Female Football Manager for AFL Victoria, Darren Flanigan, applauded the first steps towards being prepared for a future national competition.

“It is an exciting program we have developed, and is a great opportunity for the players invited to challenge them to reach their full potential,” he told afl.com.au.

The introduction of exhibition matches before men’s AFL games has been a positive step for women’s football. This year, with the women’s Western Bulldog’s team defeating Melbourne, crowd numbers rose significantly higher than in previous matches.

A professional national competition being backed by the AFL is scheduled to commence by 2017. Competing in a two-month season between February and March, AFL clubs have been invited to apply for a license in the inaugural eight-team competition.

Paxman says that the number of viewers that the exhibition matches has provided will be a good example for the success of a national competition.

“When the exhibition game was telecast nationally for the first time in 2015, it attracted more viewers than the men’s AFL game that was being played at the same time. I think that’s a pretty good indication…that really said something I think.”

“Fans are more progressive in their thinking and there is a general feeling that even the most apprehensive viewers were impressed with the depth of female talent across the country”, she says.

Women’s football is one of the fastest growing sports in Australia; according to Champion Data stats in 2015, a total of 284, 501 women played AFL nationwide – a 27 per cent growth from 2014.

On the gender gap typically associated with football being seen as a men’s sport, Paxman doesn’t see an issue.

“I don’t feel like there are many differences in terms of physicality between the women and men, each contest is just as competitive and physical,” she says.

“Obviously female bodies are generally smaller than the men’s, but I don’t think that has any effect on the fierceness with which the girls approach their footy.”

Paxman also feels the athleticism is as good as the men’s game.

“We certainly cover just as much ground as they do. There’s a lot of work that goes in to getting our bodies in peak physical condition for games, and equally as much put in to the recovery,” she says.

“I think spectators are starting to notice how tough and skilful women’s footy actually is.”

With the pending introduction of a national competition, women’s football is kicking more goals than ever before.