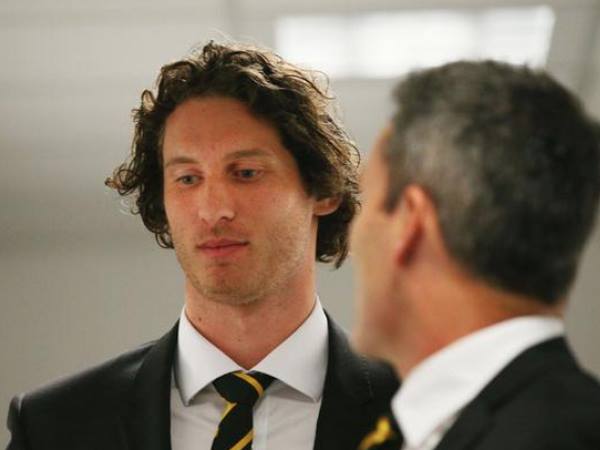 If the AFL’s judiciary system had any consistency, Ty Vickery would have been told to take the rest of the season off and begin his end of year holiday five weeks early.

Four matches for his crude blow, that left Eagles champion Dean Cox with concussion and sidelined him for the remainder of Friday night’s game, is too lenient.

The grading process through which the Match Review Panel came to its assessment of the incident was correct. It graded the impact of Vickery’s right arm roundhouse to be at the highest point of severe, which meant the case was sent straight to the AFL Tribunal.

This also meant that Richmond and Vickery did not have the option to plead guilty to the striking charge, in order to gain a 25 per cent discount on the overall charge.

The Tribunal jury of Wayne Henwood, Emmett Dunne and Wayne Schimmelbusch deliberated and after seven agonising minutes for Vickery, they judged the offense worthy of a four-week suspension and 95 carry over points.

Both Richmond and Vickery had just cause to appeal to the jury that he was acting in retaliation to an incident moments before, as Cox threw an elbow backwards into Vickery’s sternum during the ruck contest.

The Richmond counsel, Michael Tovey QC, recommended that the jury acknowledge Vickery’s inability to apply for a discount by pleading guilty to the charge and this was accepted – which is mind-boggling.

The reason Vickery was sent straight to the Tribunal is that he doesn’t get access to luxuries such as pleading guilty and discounts on his charge. He did the crime and had to do the time, which is clearly not sufficient enough.

He did offer a public and private apology to Cox, which is to be commended, but anything other than this would be seen as unremorseful.

The hit was indeed intentional, incredibly stupid, reckless and in the heat of the moment, hitting Cox flush on the jaw all whilst looking at the incoming ball from the boundary throw in.

Vickery is eligible to return to AFL football in Round 23, when the Tigers take on Sydney at ANZ Stadium. While Cox may miss the Eagles’ match this weekend with Adelaide through concussion.

The fans and supporters crave consistency from both the MRP and AFL Tribunal and time and time again they are let down, through the ridiculous punishments that are dished out.

Nat Fyfe would be irate at how an accidental head-clash with Michael Rischitelli cost him two matches. As would banned Hawks star Brian Lake, who received the same penalty as Vickery for his misconduct charge on Drew Petrie.

This is just another example of a player who commits an on-field offence, having the wrong penalty handed down to them.

If Vickery was drinking with friends at The Precinct and bludgeoned Cox with his fist, wouldn’t he be dealt with more severely? You would think so.

Eliot Bingham is a second-year Bachelor of Journalism (Sport) student at La Trobe University. You can follow him on Twitter: @EliotBingham