In the 2020 season of AFL, the umpires have received a lot of criticism but are they really the only ones to blame? 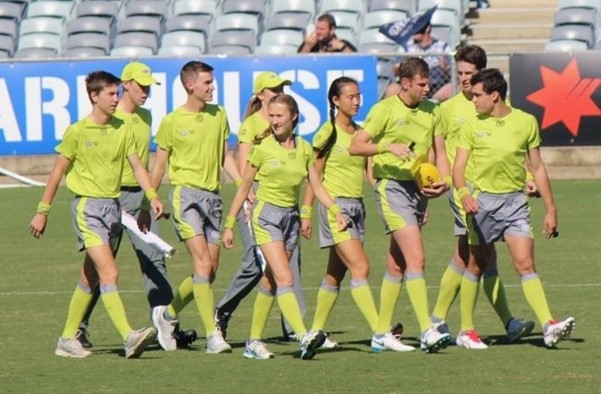 In every game of AFL, fans and followers are always quick to point out the mistakes of umpiring that’s lead to their team’s calamity. But in the last few weeks, bad umpiring comments have headlined AFL news game after game.

“Disgraceful decisions” and “pathetic umpiring” are just some of the comments made by fans and media outlets. They’re not happy but the question is are the umpires really to blame or are they only part of the problem?

Lumyai Eager, 19, was the first female to field umpire a senior men’s A-Grade TIO Central Australian Football League (CAFL) game in the Northern Territory. She says amongst the good umpiring in the 2020 season, there have been flaws.

“There isn’t enough consistency around every game, and I think that’s what the audience really wants,” She told upstart.

One issue is that umpires must run the field with players, trying to spot any foul play or incorrect use of the ball often from angles that don’t always provide a clear view of what’s going on. Regardless of whether the umpire has seen what’s happened in that moment of the game, they make the split-second, irreversible call.

Eager says whilst she always strives to be a consistent umpire, making the right call is hard when you’re not in the perfect spot to see everything.

“I’m always unsure on my calls and when I make a mistake it stays with me for the whole game and I think, could that one fault have been the game-changer,” she said.

She says it’s easy for fans to sit there and criticise the umpiring, but the job itself is no picnic, especially when the stakes are high.

“When you’re umpiring two great teams or a close match it’s very intense because the audience really lets you know when you make a mistake,” she said.

However, if an umpire is wrong, players can’t argue with the call, not unless they want the possibility of receiving a 50-metre penalty. This is something sports journalist and former VFL South Melbourne player Jack Hudson contended with as a player.

“I’d debate them heavily but regardless; you’ve got to go with what the umpire says. The risk of a 50-metre penalty, which is often shunned by coaches and teammates, is far too high,” he told upstart.

The recent changes to the holding the ball rule could also explain why it’s difficult for umpires to make consistent calls within games.

If you’ve ever watched an AFL game, it can be complicated trying to understand all the rules. There are over 60 rules in the match provisions section of the AFL laws and beneath these rules can be multiple variations to the rule itself. 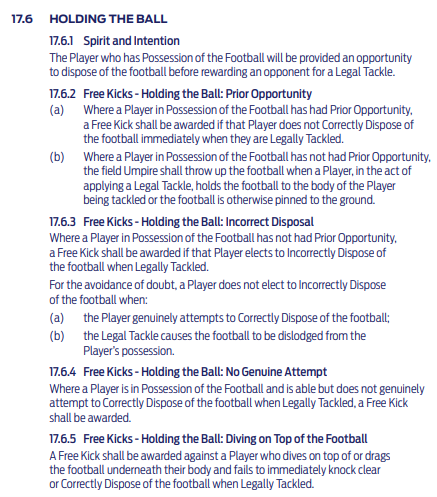 This can make it hard for umpires to constantly make the right call especially when the AFL makes changes to the rule.

This season the AFL have received a lot of criticism about the holding the ball rule, even from Hawthorn coach, Alastair Clarkson after they received no free kicks from a single tackle related situation against North Melbourne in an earlier round this year.

“What’s happened to our game? You can’t have that many tackles and not one of them be incorrect disposal,” he said in the press conference following the match.

As a result, the AFL requested their umpires tighten their skills and be more consistent, but Hudson says its only caused more problems.

“The frequent focus on different rules doesn’t help [the umpires]. There’s a lot for umpires to focus on per game but I just think the AFL needs to back its rules and go by it,” he said.

To improve their performance in the game, Eager said “the umpires should let the game flow out because if the umpires are running the game, soon fans won’t watch”.

Another issue is that recently players have been fined for staging to try and gain frees from the umpires who have unknowingly been blindsided.

What may have looked like a brutal hit to the head could actually be the staging of a player looking to gain a free-kick. Hudson says players absolutely do this in games.

“You make the most of your opportunities. Is it a good look for the game? No. Is it a sportsman way of going about it? No. I did it in a game once, wasn’t proud of it and never did it again,” he said.

In Round 13 this year two Richmond players were fined $1250 for staging during their clash with the Bombers, however by Round 15, both fines were let off.

“If [players are] going to get the free-kick and stop the opposition goal, [they’ll] do that at every opportunity [they] can to win the game of football,” he said.

Hudson says the recent negative comments are a reflection on the AFL’s reactive rather than proactive approach to issues in the game.

“I feel for the umpires with…the frequent rule changes and modifications which happen in mid-season,” he said.

Ellenie Case is a third-year Bachelor of Media and Communications (Journalism) student at La Trobe University.

Photo: AFLW Umpires in 2019 by Allied45 available HERE and used under a Creative Commons Attribution. The image has not been modified.