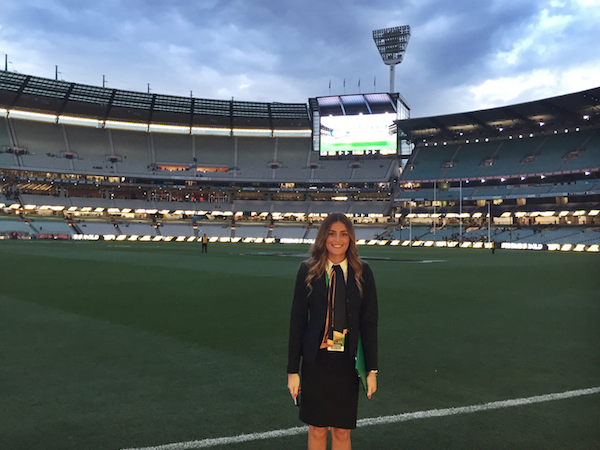 Richmond and North Melbourne players and coaches are gearing up for this Sunday’s elimination final.

But, they’re not the only people invested in the clubs’ success.

Behind the scenes of the game are a dedicated bunch of administration stuff, who work equally as hard as the playing and coaching groups.

Katherine Ruiz, who is the commercial partnerships coordinator at Richmond, and Jake Walsh, the marketing and brand manager at North Melbourne, tell upstart about what it takes to run an AFL club.

Ruiz says that despite not being the most enthusiastic AFL supporter at first, she was immediately attracted to the culture at Richmond when she began as a temporary receptionist.

“Within the first few days, I knew it was a special environment that I wanted to be a part of. The culture, the vibe and everything that went with it was pretty amazing,” she says.

“I made it known that I wanted to be a part of the club.”

She began working casually with the events team for six months, before taking a part-time role in commercial operations.

From there, she was encouraged to apply for her current position.

“I had a first round interview, and because of the work I had been doing they didn’t think I needed to have a second, which was really encouraging. And so I got the job.”

Walsh’s dad, Geoff Walsh, who was CEO of North Melbourne from 2002 until 2006, is now the director of football.

Walsh says he’d grown up with the club and had built strong connections, but he wanted to get the job through his own merits.

“Dad didn’t know I had gone for the job until I got down to the final two,” Walsh tells upstart.

“Dad started working there when I was four and I used to spend my school holidays down there.”

He says his dream was to play for North Melbourne, but he was never good enough.

“Working in footy is what I always wanted to do though, and working for North is just a bonus.”

Walsh says he welcomes the pressure of his pedigree.

“There’s probably people who may think I was given this opportunity more easily but I guess that challenges me to work harder.”

Both Ruiz and Walsh say they often work six-day weeks.

“I like to be at my desk by eight o’clock in the morning and I’m often not leaving until after six,” Walsh says.

Ruiz manages all of Richmond’s partners, and coordinates their accounts, ensuring contractual obligations are delivered and expectations met.

At home games, she organises the mascots, coin toss and any signage.

Walsh manages all external communications for North Melbourne, working closely with the media and membership teams.

“I’m always making sure that everything that we do and put out on game day is reflecting the brand we want to reflect,” Walsh says.

Neither are complaining about their huge work loads, given their love for the game.

“AFL is a sport that has the power to engage people and communities like no other. It is extremely special and rewarding to be a direct part of that,” Ruiz says.

“There are a million other people out there who want the jobs that we have so I feel very lucky to be doing what I am,” Walsh says.

Ruiz says it’s easy to get caught up in the emotion of the game.

“It’s definitely something that I wasn’t great at dealing with in the beginning, but now I can see the importance of separating winning and losing from what we do on a day-to-day basis.”

Walsh says that as a life-long North Melbourne supporter, sharing the wins with the people he works with is the best part of his job.

He says, however, that it’s important not to let losses get in the way of doing your job.

“You have 24 hours to get over it and then you just have to move on. Enjoy your win, grieve when you lose, but by the time Tuesday, Wednesday rolls around you’ve got to be moving forward.”

Walsh says he has a close relationship with the players, but that’s not the norm for most administration staff.

“I played junior footy with a few of the players so I have a personal relationship with some of them, but in terms of other staff members, there’s not much interaction,” he says.

Ruiz says there’s a lot of interaction between staff and players at Richmond.

“I think we’re a lot more integrated than most clubs. Players are always walking through the office and saying ‘hello’. We have a lot to do with them,” she says.

Ruiz says there’s one mutual motivation between administration staff and the players.

“Ultimately, everything we do is working towards playing finals, winning a grand final and bringing premierships back to Punt Road,” she says.

“The absolute priority of the football club is to win a premiership. Everything else essentially comes second,” he says.

The fifth-placed Tigers and eighth-placed Kangaroos play each other this Sunday afternoon at the MCG.