The boy from Tasmania is making a name for himself in the world of motorsport and has just won his first European championship, and he’s only 16, writes Thomas Odell. 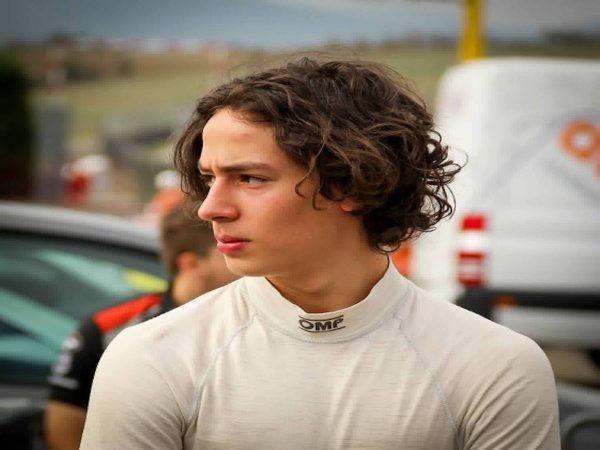 Alex Peroni has become the youngest ever Australian to take out a single-seater racing championship in Europe, winning the V de V Monoplace Challenge on Sunday in Estoril, Portugal.

The Tasmanian-born driver needed just a 10th place finish to secure the title, but took it out in style with three first place finishes.

Still only 16 years old, he has had his sights set on motorsport since the age of four.

Hoping to move up through the various levels of single-seater racing, his ultimate goal is to be competing in the Formula One circuit by the time he’s 20. 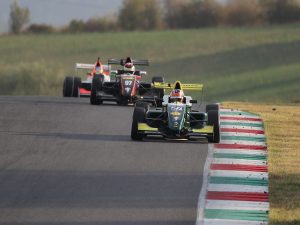 His father, Piero, tells the story of the first time he took Alex to a car race in Tasmania.

“It’s a local track called Baskerville just outside of Hobart, and he was four, and it’s a great track because it has a hill and you can park your car and watch racing from your car,” he tells upstart.

Alex watched from the roof of the car and didn’t move all day.

“He said ‘Dad they’re still out on the circuit, they’re still racing, I want to stay until the race meeting finishes,’ and he watched it all day.”

Alex maintained his interest in motorsport, and finally convinced his parents to let him race go karts when he was seven years old.

“He’d just turned 7 and it was the Australian Grand Prix, and they were talking about this new driver called Lewis Hamilton and how he’d come from go karting,” Piero says.

“Alex watched that event because it was at a reasonable time, and he started just constantly nagging that he wanted to get into karting.”

It wasn’t long until Alex ran out of competition in Tasmania and mainland Australia.

The Peroni family were visiting relatives in Italy when Alex was nine.

“My brother said given that he’s going so well, why don’t you enter him in a high level event in Italy.

“And Italy to go karting is what the US is to basketball basically, it’s where you go in go karting to compete at the highest level.

“We did that, we went in there with a small team and basically on the first event it was of 50-odd kids from around Europe, and he was straight away into the top 3.

“With a kart he’d never driven before … at a track he’d never seen before, and that set the scene for the future.”

Four years later when Alex was 13, Piero was at a go kart track in Italy when someone gave him his business card.

“He said you need this boy to race single seater racing cars, to which I sort of laughed,” Piero says.

“But the following year we gave it a bit more thought, we’d pretty much had enough of karting and it was either really stop altogether or go into car racing.

“Again we were going over to Italy to visit my family and I got this card again, I’d kept it, and I rang the guy and he said we’ll sort out a day’s testing with a Formula 4 car.

“Alex had never driven a car and he was 14, and we took him to the track and on lap 4 he did a time that the team thought was never going to be achieved in days of testing, let alone on lap 4.”

Now 16, Alex lives in Italy and has claimed his maiden single-seater championship.

And Alex has the attitude to match his talent.

“He’s very articulate, he’s got that Ricciardo type smile … and whether he’s winning or losing, that smile is there,” Quinn says.

“This is what he’s wanted to do since he was 7 years old.” 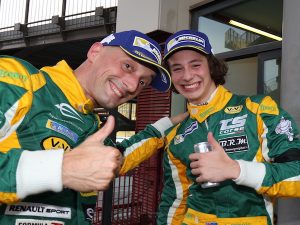 Motorsport is an extremely expensive sport, and funding Alex’s career has proved a constant challenge for ‘Team Peroni’.

“If you consider motorsport like a pyramid, we’re getting pretty close to the top of the pyramid, and there’s huge dollars being spent,” Piero says.

“Last year in Formula 4 Alex would go and test and he’d have one set of new tyres in one day.

“Then there was a team that’s called the Ferrari junior team … in one day they would put on six sets of new tyres, and when you think each set of new tyres is €1000, which is about AUD$1500, and they’d be testing constantly.” 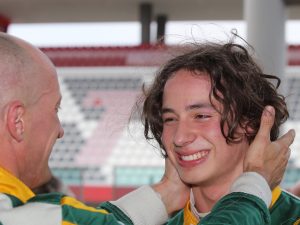 Alex says the support he gets from his family and his team is vital to his longevity in the sport.

“I probably wouldn’t be here if it wasn’t for them,” he tells upstart.

He’s taking it one step at a time, but would love to make it to Formula One.

“Honestly just to get to Formula One and just to be a professional driver would be a dream,” he says.

Alex is destined for greatness, and Piero says this is not a case of a father’s dream being pushed on a son.

“His primary school principal once said to me, Piero you shouldn’t push Alex so hard, and actually I said you know what, it’s Alex pushing me.

“We’d go testing every weekend, we’d leave Hobart at 6am, get to Launceston by 9am, test until around 5pm, take an hour to pack up and then drive all the way back home again.

“And as his mechanic I can tell you, that was exhausting for me.

“Sometimes we’d get there and it’d be absolutely teaming down, the track was flooded, nobody in their right mind would be there, but Alex would say no dad I want to lap all day, and we’d be there and we’d get soaked.”

Piero is immensely proud, and says Alex’s desire to race is inspirational.

“He’s so, so determined, I can’t explain how determined he is, and you can only respect that,” he says.

“To be honest he’s an inspiration to me.”

Thomas Odell is a second year Bachelor of Journalism (Sport) student at La Trobe University. You can follow him on twitter: @tomodell18