The NBL veteran was diagnosed with bowel cancer in March 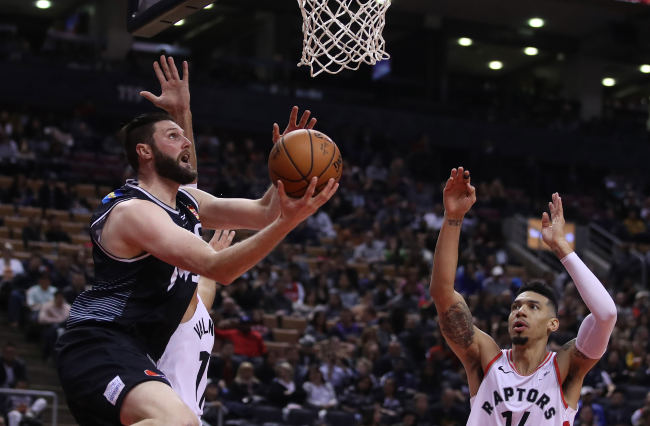 Professional athletes are admired for their phenomenal health and fitness. With their sheer athletic ability, stout toughness and competitive spirit, they can give the impression that they are invincible. So, imagine how 34-year-old National Basketball League (NBL) star Alex Pledger felt when he was diagnosed with bowel cancer in March—a disease most common in people aged over 50.

Bowel cancer (also known as colorectal cancer) is the third most common type of newly diagnosed cancer in Australia. Bowel cancer is also the second biggest cause of cancer death among Australians.

Pledger has an impressive basketball resume. He’s a four-time NBL champion, has played 263 professional games with the New Zealand Breakers and Melbourne United, and is also a long-time representative of the New Zealand Tall Blacks national team.

Ahead of the 2020/21 NBL season, fresh off a two-year stint with United, Pledger didn’t join a team. Instead, early this year before the discovery of his cancer, Pledger returned to New Zealand with fiancé Bailee Wilson to play with the Southland Sharks. Despite the catastrophic finding, it didn’t stop the couple from getting married in June.

In the lead up to his diagnosis, Pledger says he felt unwell for five months, visiting numerous medical professionals around New Zealand for tests to determine a cause. All of which came back inconclusive.

The week he was diagnosed, Pledger was admitted to hospital after becoming extremely ill. Specialists then ran further tests and the shocking discovery was made.

Doctors believed Pledger may have been battling bowel cancer for several years.

When given the verdict, Pledger says his initial emotion was shock, describing it as “one of those ‘that will never happen to me’ moments”.

However, in hindsight, Pledger now understands that he was experiencing the common signs of bowel cancer being; abdominal discomfort, a change in bowel habits and blood in his stool.

“The main symptoms [I had] were abdominal pain and a constant feeling of needing to go to the bathroom, but when I would go, nothing much would happen. The night I was diagnosed I bled a lot, but before that [I] had on/off bleeding as well,” he tells upstart.

Following the detection, Pledger’s road to recovery began as he underwent five weeks of treatment. This included radiotherapy throughout the week and two daily doses of chemotherapy to eradicate the cancer.

“It started off relatively easy but got considerably harder as the weeks went on,” he says.

Cancer is an insidious and confronting disease that places a big emotional toll on not only the patient but their loved ones as well. Pledger says he has too many supporters to name but couldn’t have got through his treatment without his wife Bailee by his side.

“She has been an absolute rock, keeping our lives on track while I was in treatment and not well at all. She even organised our wedding pretty much by herself while I was being treated,” he says.

“People often forget or don’t realise that a diagnosis and treatment like this affects family members just as much as it does the person going through it. Obviously, my family played a huge role as well, but I couldn’t have got through it without Bailee.”

As cancer can seem to come out of nowhere, Pledger believes early detection is the best cure. He urges anyone to go and get checked out if they notice unexpected changes in their bowel habits.

“My best advice is if you have any concerns or feel any of the symptoms, go see your doctor. There are several things that can cause the symptoms I felt, so if you are feeling them, it doesn’t automatically mean you have cancer,” he says.

In December 2020, Pledger signed to play with the Southland Sharks in the New Zealand National Basketball League. However, due to his unexpected diagnosis, only managed to play in the Sharks final regular-season game in July. In limited minutes, Pledger scored three points and seized three rebounds. Pledger describes the special moment of returning to the basketball court as a “great feeling”, however admits there were times where he doubted it would ever happen.

“I had finished my treatment six weeks before that night, and if you saw the state I was in when the treatment finished, it would be hard to believe I would have got on the court at all,” he says.

“I’m pretty proud of myself for getting to the point [where] I could play. It was a sell-out crowd, and they gave me a standing ovation when I first checked into the game. It was a very special moment.”

“For obvious reasons, the Bowel Cancer NZ charity has become very important to me, so it was awesome seeing everyone supporting them that night,” he says.

Pledger underwent surgery in September to remove any remaining cancer. Despite the daunting nature of surgery, Pledger says he isn’t overly worried about how the operation may affect his basketball career.

“I think it’s normal to feel a little nervous heading into any type of surgery, but especially one as major as this. It’s not really a ‘fear’ as such [as] the surgeons have their plan, but cancer is complicated, and that plan may change mid-surgery. So not knowing exactly what I’m going to wake up to is a strange feeling,” he says.

“In regards to my basketball career, I’m honestly not overly worried about that at the moment. My primary concern is getting through the surgery and any post-surgery treatment/chemo I may have to have and getting back to full health.”

“I’ll worry about basketball once those things are out of the way.”

Article: Jordan Janssen is a third-year Bachelor of Media and Communication [Journalism] student at La Trobe University. You can follow him on Twitter @JJordy1210