South Australian Amanda Rishworth has won many admirers for her campaign to eliminate the sexualisation of children. And she is making quite a name for herself as a passionate representative for her electorate and its people.

The 33-year-old Labor MP for Kingston, South Australia, has held the electorate since 2007, winning by a margin of 4.42%. Her popularity has now tripled and 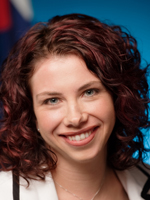 Since 2007, Rishworth’s battle cry has been to ‘fight for the South’ and she has helped secure Kingston much needed resources, such as super-fast broadband and improved local roads. Rishworth is also the current Chair of the House of Representatives Standing Committee on Education and Employment.

Her appointment to chair is no accident as Rishworth has extensive experience in the education sector. Studying psychology at Flinders University and completing her masters at the University of Adelaide.

But it was her experience in the retail industry and experiencing work-place policies first-hand that inspired her interest in politics.

‘I started university in 1996 and John Howard was Prime Minister so my working conditions changed as a result of his law changes and also there were some changes to the university. So that’s what got me politically interested,’ says Rishworth.

Rishworth is an active member of the Kingston community getting herself involved in local surf-lifesaving and participating in a host of local organisations. Rishworth says that being involved in her electorate means that she accessible and she can keep in touch with the people she represents.

‘It’s only in that way that I can then take what they think and what they believe to Canberra, which I think is a critical role of an MP,’ says Rishworth.

Like most politicians, Rishworth says her main ethos is to improve the quality of life. And she believes that we should start with improving the lives of our youth. Rishworth says education and health, particularly mental health, are the integral building blocks of a successful person. And she helped form Headspace, a national youth mental health initiative, in Kingston.

‘I think we are increasingly hearing that young people are struggling with mental health, which is why I pushed so hard for a Headspace in our local area,’ says Rishworth.

But it’s the sexualisation of children that has Rishworth most concerned. She says many parents in Kingston are alarmed by advertisements that sexualise young people. And she spoke very strongly about the issue in the House of Representatives this February.

Rishworth says she believes society is sending wrong messages to children, affecting their self-esteem and personal values. ‘If society is telling young girls in particular that they have to be sexy and that’s their only job in life, well, that’s not going to lead to good mental health,’ says Rishworth.

Rishworth says that stopping the sexualisation of children fits into a healthy youth environment, therefore improving a child’s well-being and quality of life.

‘I feel very strongly that we should be providing the best possible environment for young people to grow up,’ says Rishworth. ‘That includes good education, that includes appropriate messages about what they can do in their life and what they can achieve.’

Although there has been a lot of talk recently over the sexualisation of children and how it is negatively affecting youth, there has been little conversation about how the government can solve the problem.

‘It’s very hard to ban things and I don’t think it’s as simple as that. But I do think we need a cultural change where retailers and the media industry do take heed,’ says Rishworth.

Rishworth admits that while there is no clear solution, the issue will continue to weigh heavily on parents minds.

‘I’m overwhelmed by parents saying that they do think that this is an important issue and would like to see a more responsible attitude by retailers,’ says Rishworth.  ‘But I think there is a role for government to look at where we can regulate and stop businesses from doing certain things.’

Rishworth has proven that she has the drive to fight for her own opinions and also those of her constituents. And she has ambitious plans for Kingston, focusing on education, access to healthcare and employment.

Only time will tell if she will be given the chance to follow through.

Stephanie Azzopardi is a student at La Trobe University.

To view profiles of some of the other backbenchers as part of upstart’s Backbench Insiders project, click here.