The superstar has no plans of slowing down. 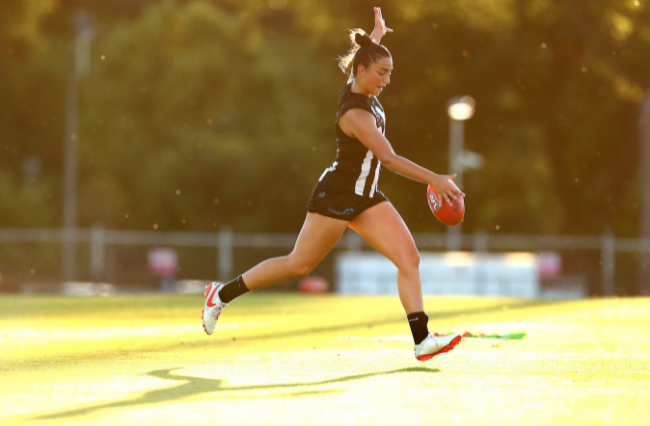 While the game of AFL was still very new to Amelia Velardo in 2020, it took only three matches for the talented 19-year-old to find herself on an AFLW list.

After just three NAB League appearances for the Western Jets in 2020, Velardo commenced the rest of her draft preparations under COVID-19 restrictions, eager to prove that even in a disrupted year her newfound dream of becoming an AFLW player would not be taken away.

“There definitely was talk of something happening so you did have to stay ready… it was very tough to keep motivated, keep training and keep the body intact ready for the end of the year,” she said.

The former state basketballer who played for the Keilor Thunder made the switch to AFL after falling out of love with basketball. While not expecting to get drafted in her first year, Velardo was adamant that playing football was something she wanted to do.

“I knew that the draft was still going to happen, and I wanted to be in it,” she said.

After meeting with several AFL clubs, Velardo was nominated as a part of the biggest draft pool of female footballers ever recorded, ultimately being selected at pick 25 by Collingwood.

“I genuinely loved them (Collingwood) in the interview I had with them. I didn’t have any expectations and just to be considered in the draft was something huge…And to hear my name [read out] was an overwhelming experience,” she said.

In what was an amazing achievement for the young athlete, Velardo admitted that her family was initially not so pleased, the diehard Carlton supporter confessing it was awkward hearing her rival club call her name.

“It was actually funny, I’m a Carlton supporter so it was very ironic, but with the coaches and the environment they had I loved them and was very lucky to end up there,” she said.

In her first year at Collingwood, Velardo enjoyed learning and observing some of the career pathways and roles that exist within a professional sports organisation. Along with her new football commitments, Velardo is also a full-time student undertaking a Bachelor of Law and Psychology, acknowledging that at times the balancing act has been overwhelming.

“[It] has been pretty intense…I’ve had to drop some of my subjects because it all just became too much…Footy is fantastic in all its ways, but it does take a mental toll on you.”

The busy schedule which Velardo now follows has led her to have a greater appreciation for the work and sacrifices other female athletes undertake.

“We do a hell of a lot as female part-time athletes and for someone like me who’s at uni it’s a lot in itself…you see the other girls who work full-time [that] are paramedics or might run their own business, I don’t understand how they do it,” she said.

Although Velardo’s welcome to Collingwood was warm, she still felt out of her depth having made such a quick leap from amateur to professional football.

“It was definitely a daunting experience, there’s always that doubt when you’re in a professional environment and you’re thinking what am I doing here? But I think my skills and everything carried over fine,” she said.

After making her debut against Carlton in round one of the 2021 season, Velardo shifted focus towards her passions away from the football field, seeking opportunities to utilise her platform and drive the discussion surrounding gender inequality within sports.

“I’ve always been passionate about sport and the gaps between genders in sports from a young age and I always said to myself if I ever did make it, I was going to try to make a difference.”

Velardo says she has established a special bond with her new teammates and together under the guidance of some of the senior leaders, she has been able to find her voice and join forces to fight the issues she is most passionate about.

“The girls at the club have become like a second family and we love spending time with each other away from being teammates. We are just great friends.”

Velardo hopes she can help take the Pies to the next step in season 2022 and play a part in the clubs inaugural AFLW premiership.

Article: Liam Jensen is a second-year Bachelor of Media and Communication (Sports Journalism) student at La Trobe University. You can follow him on Twitter @liamdjensen18