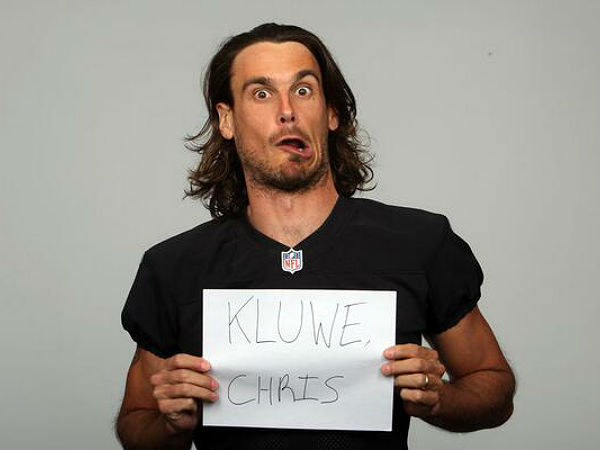 My earliest memories of the NFL are of ESPN’s Monday Night Football broadcast – or more specifically, the pregame show’s “Jacked Up” segment.

Tom Jackson, Chris Berman and co. unashamedly cheering on the most brutal hits of the past week; wide receivers getting blown up across the middle, blindside quarterback sacks and devastating blocks were greeted with sheer, unadulterated exuberance.

Not even Randy Savage circa 1980 was this macho.

The over-the-top masculinity spewing forth from a Bristol, Connecticut studio mirrored the league’s public conveyance. This is football goddammit: the most barbaric sport on earth played by the most primal of men.

For the most part, such a mentality persists in today’s increasingly corporate NFL.

Which makes Chris Kluwe the antithesis.

Kluwe, punter for the Oakland Raiders, has been in the league for eight seasons and earned a reputation as one of the finest at kicking an awkward shaped ball really high, really far and really precisely.

Here’s some punts out of the endzone against a stiff breeze. (NSFW naughty words) http://t.co/e1X73dHubB

He’s also one of the most prominent – or well-known – social activists in the US, after he penned a letter to Maryland state assembly delegate Emmett Burns, in defence of Baltimore Raven (and fellow gay marriage advocate) Brandon Ayanbadejo.

“It was off the cuff,” Kluwe tells me. “I had no idea it would go viral like that.”

Considering the NFL’s traditional stance, it would be easy to imagine Kluwe fearing for his job in some way after that letter.

But that wasn’t the case.

“I never had that concern because I know I can punt very well,” he says. “That really is the basis of the NFL, if you can play, teams will find a spot for you.”

“I’ve never had any problems with teammates, they know when I’m there it’s to play football. Just as I expect to be free to live my own life away from football, when I’m at the football facility, that’s 100 per cent what I’m focusing on.”

However, in the lead-up to the Super Bowl earlier this year, a colleeague of Kluwe’s made a series of derogatory comments regarding the presence of homosexuality in the NFL.

San Francisco 49er Chris Culliver’s remarks were indicative of an out-dated, and somewhat traditional thought process. And yet, rather than chastising him, Kluwe was supportive.

“I think that was more just a case that he hadn’t met any gay people, been around any gay people, and didn’t know what was expected of him as a member of today’s society,” he says. “The good thing is, he saw the error of his ways, he went out helped out with Trevor’s Project in San Francisco. The real thing here is we don’t just pile on in these situations, we have to educate as to why something like that is hurtful.”

And while some pundits latched on Culliver’s comments to critique the league’s overall stance towards homosexuality, Kluwe prefers to look at the bigger picture.

“It’s more a societal issue. We’ve seen strides made in society,” he says. “As Martin Luther King said, history tends to arcs towards more justice than less – or something along those lines – and that’s what we’re seeing. People understand this is a civil rights issue; a freedom issue. Football players are born and grow up in the society, and as society changes, you see the views changing within sports as well.”

However, he does see one roadblock in the path of widespread acceptance across the NFL.

“I think the main issue with the NFL is its become such a corporate environment that when coaches and general managers look at it, they have this perception they don’t want to cause a distraction for the team,” he says.

“Unfortunately, they view it as if a player goes out there will be a lot of media attention which could cause a distraction for the team.

“Where, really the way they need to look at it as, sure there’s going to be some media attention, but it’ll go away. And, when that player is able to come out how much better will they be able to play now he isn’t hiding who he is.

“You can’t play at 100 per cent of your potential if you’re worried someone is going to find out if you’re gay or not.”

Kluwe isn’t just an advocate on the off-field. He’s also on the advancement of on-field safety for players – predominantly, the issue of concussion and head trauma in the league.

Over the past few years the NFL has taken substantial strides to improve the way head injuries are handled, yet any moves are often met with push-back from players.

“I think it gets to the broader issue that we value short term gain over long term consequence,” Kluwe says.

“In football, you have a very limited time to make your money, so you’re not thinking 30, 40 years down the line. It’s about maximising the four-to-five years you have in the NFL.

“In that case, you’d rather get hit in the head, because you can come back from a concussion in a week or two. It’s probably causing long-term damage, but not right now.

“As a whole, we have to decide what we value: the entertainment spectacle of guys crashing into each other at high rates of speed, or do we value the health and stability of the people who play this game long-term.”

And, to its credit, Kluwe says, the change is noticeable across the league, and an exercise in the survival of a sport.

“Trainers are definitely much more on top of it; if you say anything at all like ‘I’m dizzy…I got shaken up on that play’, then immediately they’ll take your helmet and you have to come out,” he says.

“A lot of the real serious damage comes from is when you take that second concussion right after the first. They’re trying to show they are taking care of players, rather than “we are sending these guys out to have their brains destroyed.

“What it boils down to is if parents decide this game is going to injury their children, they won’t let them play. Then you won’t have players coming through the ranks, and they game will die off.”