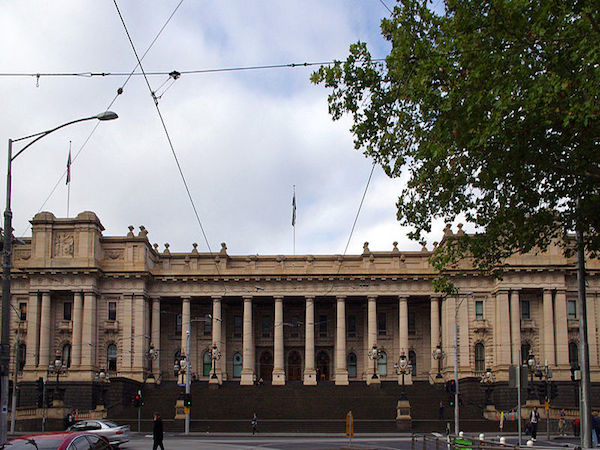 James Campbell, State Politics Editor at the Herald Sun and Sunday Herald Sun, tells upstart that Mr Andrews is yet to stray from the promises he made to the public prior to his election six months ago.

“He’s keeping his election promises,” Campbell says. “He’s seen what happens to governments who get elected and break promises and he’s determined to stick, as far as he can, to the things that he promised he was going to do when he was in Opposition.”

Campbell joined the Herald Sun as a political reporter in 2008. In 2013, he provided coverage of the Australian federal election for the BBC and was also awarded for his state reporting efforts at the Herald Sun.

Campbell was the journalist behind the “Secret tape bombshell: Police crisis rocks government” article released during Ted Baillieu’s time as premier, which led him to receive a Gold Quill and a Walkley Award for Scoop of the Year.

“They’ve made solid starts on removing 50 level crossings – some of those have gone out to tender,” Campbell says.

“They’ve also put quite a bit of money into Melbourne Metro and put a hard start date on that so we now know that the major construction will be underway before the next election, which is a surprise. Although they had a promise to build it, they hadn’t given themselves hard deadlines on it.”

“They’ve scrapped a previous government’s commitment to go with a private tender to remove level crossings on the Dandenong line and Cranbourne/Pakenham line and to put high-speed signalling in there – they’ve taken that project over themselves. If they tick off on it, they’ll have a second major river crossing from the Transurban proposal that the premier unveiled last month.”

Campbell notes that the East West Link took up the first three to four months of the premier’s time in office. He says the decision to not go ahead with the project has had an undeniable effect on the premier’s popularity.

“There’s no question that cancelling the East West Link has hurt the government in the eastern suburbs,” he says. “You can see that from the fact that all the federal Liberal MPs are campaigning hard on East West Link, just look at their Just Build It campaign.”

“Everyone has a view on that – you’ll either think that what he did was the right thing or you think it’s a disaster, and I don’t think that people’s views on that are going to change. But the main thing is, from his point of view, he managed to fix it by budget day,” he says.

Abbott doesn’t understand the concept of keeping promises as he excoriates Dan Andrews for keeping his promise to cancel the East West link.

So no East West Link, but instead a stupid CityLink freeway from Yarraville to Docklands, good job Daniel Andrews 👏🏻👏🏻 — jack. (@jaackoneill) April 30, 2015

Another issue that Campbell thinks could be challenging for the Andrews government is public sector wages.

“If I were the government, the one thing that would be causing me some concern is the fact that the public sector wages bill is going to jump seven per cent this year, which is a big increase for one year,” he says.

“The government says that most of that can be accounted for by the fact that they’re hiring more public servants – more firemen, more ambulance staff, the sort of thing that they said that they were going to do – and should settle down after that but, as I said, seven per cent is a big jump in one year.

“If next year we’re opening a bunch of papers that says another seven per cent then that will be something that will be a big problem for them down the track.”

The government handed down its state budget on 5 May, which delivered on the ALP’s commitments to education, health and transport.

“They’ve got a budget that’s got quite a bit of money to spend,” Campbell says. “As long as the economy keeps growing at the rate at which they say it’s going to keep growing, the budget will be fine.”

According to Campbell, Daniel Andrews’ government has had a solid six months in office.

“All in all, it’s a pretty good start for a state government, particularly when you compare it to the previous mob,” he says. “When Ted Baillieu came in, nothing seemed to happen for seven or eight, nine months. You can’t accuse this mob of being do-nothing, if anything they’ve been a bit too busy.”

“The test will come for this government much later in the term, when we’ll see whether or not the things that they’ve committed to will come in on time and on budget.

Susannah Woolley is a third-year Bachelor of Journalism student at La Trobe University and editor of upstart. You can follow her on Twitter: @susannahwoolley.