Commentator Andy Maher goes above and beyond to produce an informative product for whatever audience he broadcasts to. 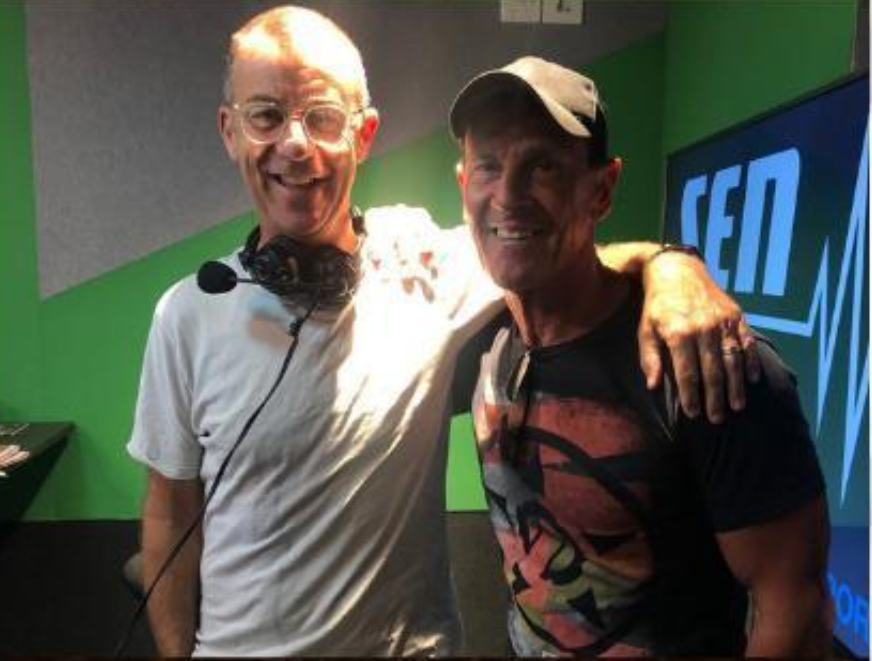 Imagine going from commentating a friendly kick-to-kick in your backyard, to sitting alongside esteemed commentator Peter Donegan at one of Australia’s most iconic sporting venues.

In a matter of hours this became a reality for experienced AFL Nation and Channel 7 cricket commentator, Andy Maher.

While preparing himself for his usual weekend job as boundary rider, Maher was called up for the opportunity of a lifetime by his former boss and Channel 10 Head of Sport, David Barrum.

“An opportunity presented one night in a game at Football Park between Fremantle and Port Adelaide where they were short of commentators for some reason, an actual kick-by-kick caller, and they said: ‘Do you reckon you could do it?’,” the 54-year-old told upstart.

“I said: ‘I’ll have a go’, so I sat alongside Peter Donegan and that was the first game I ever called.

“It was just pretending to do it in your own mind and then imagining yourself doing it for real.”

Twenty-seven years later, Maher gets to sit alongside Donegan every Sunday to call a game of footy.

But that’s not where it stops.

Clark has worked with former AFL greats Garry Lyon and Tim Watson on SEN Breakfast as well as The Age journalist Sam McClure on Crocmedia TV show, The Oval Office.

This is Clark’s first year of working with Maher, and he has already identified a distinct difference between him and other media talent.

“Andy’s a little bit different to a lot of people in the industry who perform on air because he’s worked behind the scenes for a long time, so he has a great understanding of  what it takes to make a show from start through to final product,” he told upstart.

“He understands the producing side of things for radio and TV and the challenges that you can run into sometimes, so he’s got a more rounded understanding of the entire product, rather than a lot of guys and girls who come through these days and think everything just magically appears in front of them.”

Maher believes he never would’ve learned what it takes to produce a TV or a radio show if it weren’t for the people he’s connected with throughout his career.

“I got involved in sport at a pretty young age, working in the industry and then just met some people along the way,” he said.

“One of the people I met happened to be a bloke by the name of David Barrum, who got the contract to produce all of the content for sports AFL on Optus Vision back in about 1996. [I didn’t go through any] specific pathway, I was just in the industry, loved it, met the right people, they took a punt on me, and here I am.”

After Barrum initially gave Maher the opportunity to spearhead Channel 10’s AFL commentary team in 1996, he was called upon again to lead the company’s Twenty20 cricket coverage.

Maher became a play-by-play commentator for the Big Bash League (BBL) in 2011, which forged the pathway for him to lead the Women’s Big Bash League (WBBL) coverage in 2015. After eight years of broadcasting the league, Channel 10 lost the rights to Channel 7 for 2019.

Maher says the broadcast change as well as the evolution of skills has helped the WBBL grow. He believes he’s one of the lucky ones, as he gets to view the league from the best seat in the house.

“These people are laying the foundations down for their sports that will progress for the next 120 years like footy has,” he said.

“We’re on the ground floor here, a lot of us who are part of it at the moment, and I think that’s fantastic. I’ve hardly met one female sportsperson either a footballer or cricketer who isn’t a magnificent ambassador for their sport.

“They all take that on, given they know where their sports are at. I could keep going for an hour and still not run out of reasons why I like it. It’s great, I love it. The games are good.”

Maher’s love for the WBBL has grown into an admiration for women’s sport in general, something that wouldn’t have happened if he didn’t put his hand up to lead Channel 10’s coverage four years ago. His one piece of advice to up and coming broadcasters is simply to invest in the women’s game.

“That’s okay, people can have that, if that’s the way they want to live, they want to see the world, fine, go your hardest. But I think if you’ve got half a brain, you can separate the difference that women do play sport differently to men. It doesn’t mean it’s better or worse, it’s just different.”