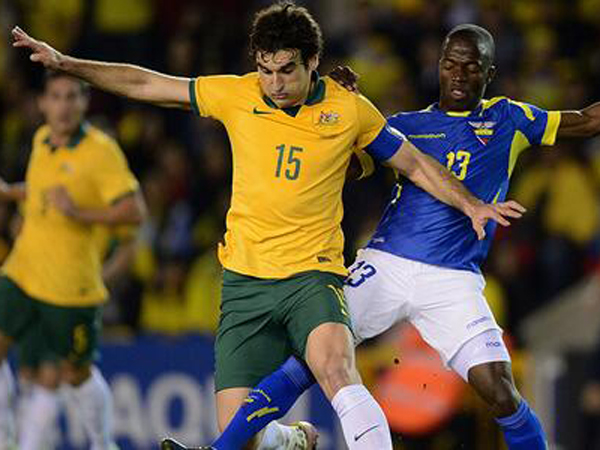 Australia’s 2014 FIFA World Cup preparation reaches a pivotal moment next Wednesday, with the Socceroos’ 30-man preliminary squad to be named.

We already know that stalwart defender Lucas Neill will not be making the trek across the Pacific, as coach Ange Postacoglou looks to a fresh approach for WC2014.

Optimism among Socceroos fans for the tournament may have been soured by the group stage draw back in December, but if being pitted against 2010 winners Spain, fellow European giant Netherlands and emerging South American nation Chile wasn’t enough to sink the spirits of many, injuries to key players surely won’t help.

Gaps in the rearguard will be Ange’s first point of concern as Australia needs to recognise they will spend large portions of the tournament without possession.

While a focus on introducing youth into the senior setup is admirable, it cannot be a reason to justify a weak showing in Brazil.

Fortunately, those with a low number of caps who lined up against Ecuador in London back in March experienced a game that had everything – a brilliant first half, a sub-par second, building a lead before battling to keep it and a 10-men against 11 fight before a disappointing defeat.

Despite only being one game it will have provided the more inexperienced players a great insight into what is required to make the next step in their international career. But, the point that it was just the one game remains and the younger players are only just the one game better off than before.

So, who makes the cut?

Mat Ryan has enjoyed a stellar season with Club Brugge in Belgium and should be in goal against Chile on June 13; Mitch Langerak is arguably Australia’s most talented goalkeeper but limited game time at Borussia Dortmund and a red card in his last start in the green and gold means he will warm the pine in Cuiaba.

Meanwhile Liverpool back-up Brad Jones and Adelaide United’s Eugene Galekovic are expected be included in the 30-man preliminary squad, with one likely to be excluded from the final 23-man announcement.

Issues at the back is where Postecoglou will be losing the most sleep. He’s lost a couple of key players and the stalwarts of years gone by have moved on, leaving a gap in the transition of youth.

John Davidson has enjoyed game time in the Eredvisie and is likely to make the left-back spot his own, but should expect competition from FC Utrecht’s left-sider Michael Zullo. Postecoglou may dip into his Brisbane Roar knowledge and place his faith in Ivan Franjic for the opposite side or go with the experienced Luke Wilkshire.

In the centre, Matt Spiranovic has had a great season at West Sydney since coming home from China, while 2012 Asian Player of the Year, Sasa Ognenovski, has already voiced his discontent at the possibility of missing out on a trip to Rio.

English Championship side Millwall is the home of left-footed central defender Shane Lowry, who would provide a decent option for Postecoglou and is perhaps playing at the highest level of all the remaining options.

Alex Wilkinson and Ryan McGowan have been a part of recent squads and are likely to feature, despite the former’s mistake against Ecuador.

Mile Jedinak will be the midfield’s anchor after a stellar season leading Crystal Palace away from Premier League relegation, while Mark Milligan should slot in either next to, or just in front of Jedinak.

Tommy Oar and Matt Mckay are likely to be in a battle to fill the left side while the position on the right flank is up for grabs. Ben Halloran of Fortuna Dusseldorf in Germany is in hot scoring form and will want to make that spot his own.

Adam Sarota, Dario Vidosic, Oliver Bozanic, Tom Rogic and James Holland are the pick of our European-based midfielders and will be in the squad.

Up front, there are a few options. Tim Cahill will lead the line of sorts, but may play a late-arriving centre forward role. He’ll be accompanied in the squad by speed-merchant Mathew Leckie, who has shown promise in recent matches, potentially Nikita Rukaytsya, and Josh Kennedy, who will always be a chance because of the aerial threat he poses.

Of the A-League bolters, Josh Brilliante and Osama Malik have already been singled out by Postecoglou as possibilities, while the goal-scoring efforts of Adam Taggart, James Troisi and David Williams may not be only in vain.

With an organised back four, a central midfield three with all the required traits, hard-working, speedy wingers outside and perhaps Cahill leading the line up front, Australia will have a 4-3-3 formation with the ball and a compact 4-5-1 without it.

It may not be our strongest possible 11, or the group we would’ve preferred, but Australia should play with freedom in Brazil and may surprise more than a few, safe in the knowledge that even admirable losses will generate optimism within our own shores and respect from around the globe.

Luke Sale is a third-year Bachelor of Journalism (Sport) student at La Trobe University and a staff writer for upstart. You can follow him on Twitter: @lukesale1.