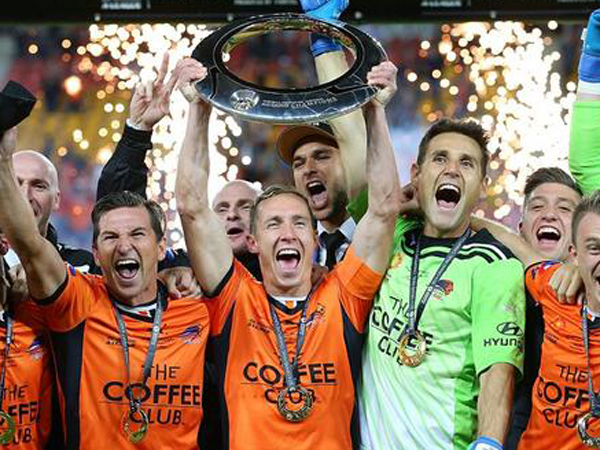 Sunday evening’s showpiece between Brisbane Roar and Western Sydney Wanderers was everything it always promised to be – tense, tight and tough with decisive moments in cliff-hanging isolation.

Matthew Spiranovic’s near-post header following a miss-judgment from Thomas Broich powered the Wanderers into the lead in their second grand final in as many years since their foundation. But it was the Roar who gradually swung the tide of the game and, from an 86th minute set piece, the out-going Besart Berisha escaped his marker and nodded home to force extra-time.

From there, Brisbane grew in confidence and strength while the Wanderers, who were perhaps tiring, lost concentration for a brief moment. But it was one long enough to allow substitute Henrique to win a header he shouldn’t have and free himself from any defenders to stab home Ivan Franjic’s cutback in the 108th minute.

In familiar surroundings and before a record crowd of 51,153, the Roar saw out the remaining 12 minutes and were crowned champions of Australia.

A 2012/13 season was spent in relative transition by the Roar under new coach Mike Mulvey, but he has adopted many traits of his predecessor, Ange Postecoglou, and retained a number of quality players to ensure the team from Queensland remain the most powerful A-League force.

Eight players from Brisbane’s 2011 & 2012 title-winning squad’s were involved yesterday, a large number when you consider the loss of players suffered by fellow perennial contenders the Central Coast Mariners in the same period. The players who have departed since 2011 have been replaced with the pick of the Roar’s youth squad or talented experience.

Under Postecoglou, central midfielder Erik Paartalu played the part of the midfield-enforcer, distributing possession wide to the wings or into the more creative talents of Broich.

While the German ace remains, Paartalu found suitors in Asia and it has been former youth player Luke Brattan who has grown into much the same role.

Australian-capped central defender Jade North’s return to the A-League at 32 years of age, following stints in Asia and Norway, is evidence of this experience, while his fourth Australian premiership with as many clubs is a testament to his talent and longevity.

To the contrary, Tony Popovic has been lauded as a mastermind many times since the foundation of the Wanderers; his ability to turn a squad that features many mediocre, washed-up players from other clubs into championship contenders has been remarkable.

But he’ll cursing his grand final squad selection for much of the off-season.

Nikolai Topor-Stanley twisted his knee and potentially damaged his medial ligament before being forced off in the 62nd minute and, without a recognised central defender on the bench, midfield rock Iacapo La Rocca was forced back to fill the void.

La Rocca had been dominating in midfield prior to this and ended up being joint winner of the Joe Marston medal for best afield.

However, so often an incoming substitution is able to swing a match in a side’s favour, but this injury seemed to give the Roar renewed vigor going forward and the formerly comfortable Wanderers now looked unsure at the back.

Brisbane’s two goals were directly the fault of the new centre-back pairing.

That they weren’t comfortable in a partnership was perhaps understandable given Topor-Stanley had played every game for the last two seasons, but unacceptable of Popovic to go into a game of such standing without a recognised defender on the bench in the belief his two stars at the back would remain fit throughout.

Hindsight is a wonderful thing, but even before kick-off it must’ve presented itself as too big a risk to take.

It wasn’t quite the two goals in the final three minutes of the 2011 final to overcome Central Coast in a shootout, or the ever-controversial last-minute penalty to conquer Perth in 2012, but it was still a game befitting the season’s two best sides.

The Roar, who have now not scored before the 84th minute in any of their three grand final victories, are truly the masters of the late-show and have become the A-League’s most successful side.

Luke Sale is a third-year Bachelor of Journalism (Sport) student at La Trobe University, and a staff writer for upstart. Follow his Twitter feed: @lukesale1.