Refugees are using art to heal and to find a home in Melbourne. 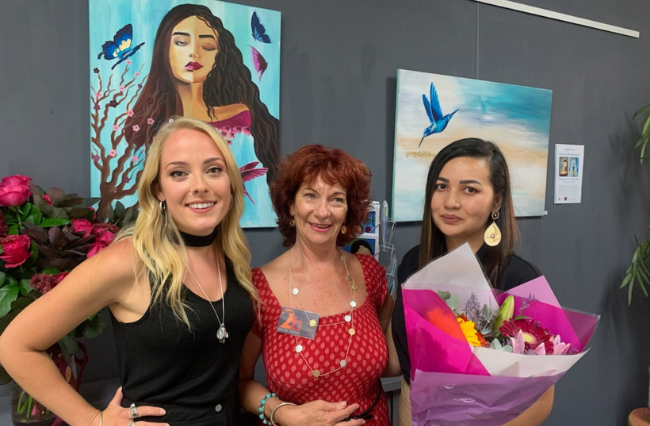 In the Japanese tradition of Kintsugi, broken pottery is mended by applying lacquer and dusting it with gold. Striking lines then illuminate an element of beauty where the break once was. This custom has been used to symbolise the endurance of “broken” people as they learn to pick up the pieces from traumatic life experiences.

It’s a hard journey for displaced people fleeing their homes in search of safety. Art can be a poignant tool for refugees to process the trauma they have experienced. It has also acted as a cultural bridge for refugees to integrate and find acceptance in the community.

After being seriously injured in a bomb blast in the Afghan capital Kabul just over two years ago, Humaira Fayazi, has used art as a way of building a home here in Melbourne, whilst also healing the wounds of the war she fled from.

“I think art is the only way that you can show your emotion[s] and say the words that you cannot write,” Fayazi tells upstart.

In the last two years Fayazi has had 10 surgeries and is only just regaining her ability to walk in the last year and a half. In Kabul, she had her own gallery, taught art classes and ran exhibitions with young local men and women, but had to flee Afghanistan because the war made her home unsafe.

Like many refugees and migrants that come to Australia, Fayazi has faced feelings of isolation and experienced the many challenges that come with displacement.

“When I came here, I was alone and I had many bad days, but still I’m thinking about women in Afghanistan, my friends, my family, my cousins. That’s why I think art is the only thing that can make me feel better and make me feel [able to] start again and never give up.”

In Melbourne she has found a community through Space 2b in St Kilda, an organisation that helps refugees to develop their art, connect with others, and learn to make a living in Australia. Exhibiting her art has given Fayazi a space to develop the confidence and strength necessary to begin her new life in Melbourne.

On 20 March 2021, the gallery held an opening night for an exhibition of works that Fayazi created with English migrant and established artist Vicki Soar. Fayazi and Soar’s exhibition, ‘Female Empowerment’, encompasses themes that hold similar meanings for the two artists of different cultures, but are depicted differently through their unique styles.

Having recently lost a dear friend, Fayazi is always focussing her art on those she had to leave behind in Afghanistan.

“The subject always … was and always is women in war. Because I have seen many women in Afghanistan, the damage and they lost their dearest in the war,” she says.

The exhibition is part of a program running into July called Face2Face that enables refugees and migrants to develop artworks and learn skills that help them gain economic independence using their art.

Between 2020 and 2021, the Australian government allowed 13,750 refugees to settle in Australia. All of which come from culturally diverse backgrounds and of various skill sets. They are then expected to begin anew in a foreign society if they are granted residence.

Art allows them to hold onto their culture and express it, whilst also using it to make a living. In 2019 Space 2b’s Space2Fly program resulted in 80 percent of the participating newly arrived refugees ready to sell their art through the gallery and external outlets. The ability to create and sell their art provides them with confidence and a sense of security.

It took a lot of strength for Vicki Soar to move to Australia alone from England. Influenced by Kintsugi, she incorporates flakes of gold in her paintings, symbolising how the scars of suffrage that women endure can become elements of their beauty.

Soar’s art has played an essential role in her finding a sense of community here in Melbourne as a practicing art therapist and artist. Having worked in a sexual assault trauma centre, she understands how the healing power of art has been able to help many refugees.

“With trauma, that part of your brain where you can express things with language switches off. So, art is a way to use your body and use some of the trauma and express it and reintegrate it, and make meaning from it, and overcome it,” Soar tells upstart.

Art is forming a home for refugees here in Melbourne, but it is also helping the Australian community to accept them in return. By hosting these exhibitions and programs, and inviting the local community to be a part of them, people of foreign worlds are able to come together.

Soar believes that art enables us to look at the artists’ work in terms of symbols, eliminating elements of race or gender.

“You’re seeing someone’s soul, I suppose,” she says. “And that’s hopefully a way to overcome racism and any prejudice because you’re just connecting with a different part of someone without the barrier of racism.”

Photo: Supplied by Space2b. The image has not been modified.