A pair of gold medalists discuss life in a sport away from the spotlight. 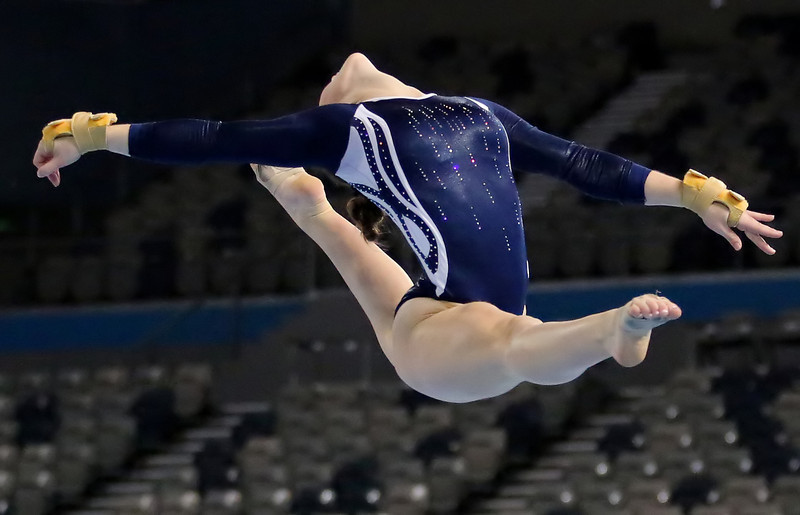 On 9 April 2018, Australian gymnast Alexandra  Eade  was on top of the world.

At just 20 years of age, Eade  became the first Australian to win a Commonwealth Games gold medal in gymnastics since 2010, victorious in the women’s floor exercise  competition.

Having missed out on the chance to compete at the Rio Olympics  in 2016, this  was  the  culmination of  persistence and endless hours in the gym,  and a moment that she will cherish forever.

The  broadcast  schedule, however, meant that not many people would have seen it.

“I competed, and I finished at  6pm, and my floor routine didn’t get put up until  11pm  on the television,”  Eade  told  upstart.

“I had so many people back home who obviously wanted to see it but when they’re struggling to find it, it’s just such a hassle that they probably don’t even end up watching it.”

It frustrated her, but the  out-of-sight, out-of-mind nature of the sport is something that  she’s grown to begrudgingly  accept, having  lived  the ups and downs of professional gymnastics.

Between  the Olympics and Commonwealth Games, the  sport’s  two marquee events,  Eade  endures 32 hours of training every week, a biomedicine course, meticulous dieting, coaching junior  gymnasts  and a competition schedule that is predominantly out of her control due to funding issues from the governing body in Australia.

Rather than going out of her way to seek the spotlight, she simply desires some  respect.

“I won a gold medal, and so did so many other people, but they focus on the swimmers or the basketballers or the sprinters. They don’t focus on the other little sports along the way.

One of those little sports in question  is  squash.

The nature of the sport means that she isn’t a household name, but Australian Donna Urquhart has been carving a successful career on the global Squash circuit, and won gold in the mixed doubles in the Gold Coast, teaming with her cousin, Cameron  Pilley.

It’s a moment she described as unbelievable, and credits a large share of the victory to  Pilley’s  ability to stay calm in the moment.

“He was awesome to play with,” Urquhart  told  upstart.

“He was always really positive and encouraging and such a good vibe to be around on the court.

“Even before we walked out on court, we always sort of remind each other just to enjoy the moment and soak it up, because it was a once in a lifetime experience to have the whole Aussie crowd there cheering for us.

“We went out there pretty relaxed because we were just thinking, ‘how good is this?!’”

Urquhart has been competing on the Professional Squash Association (PSA) world tour since 2006.

Her gold in the mixed doubles was her third medal in Commonwealth Games competitions, adding to her two bronze medals from previous meets.

She hits the practice court twice a day, six times a week for short, sharp workouts that mimic the intensity of a match, and does extra strength and mobility training to keep in top shape.

Unlike gymnastics, squash is not an Olympic sport, and as a result, representing your country at the Commonwealth Games becomes the  pinnacle.

Given it was the primary opportunity to showcase and grow her sport, Urquhart and her fellow squash players were desperate to compete.

“It’s such an important event to us as Australian squash players,” she said.

“It’s something that happens every four years and ideally you want to be ready for it because if you’re not then it’s a missed opportunity.

“You do everything you can within your control and your power to be ready once that comes around.”

There was a stage where Urquhart had to consider whether the gruelling schedule and living out of a suitcase was worth it, particularly considering the prize money available.

For context, the winner of the  Ladies Wimbledon Tennis  Champion ship pocketed more in two weeks than the  entire female squash tour  prize pool  in  2016/17.

But what she hasn’t gained in prize money, she has certainly won away from the court, tying the knot with Greg  Lobban, a Scottish squash player shortly after the games concluded.

She simply wouldn’t change a thing.

“I love the sport of squash,” Urquhart said.

“It’s such a great sport in so many ways and the way it challenges you.

“It would be nice to be able to, at the end of my career, have a bit more to show for it and have made more money from it, but I still don’t think I would change the sport that I chose to play because of money.

However, having been competing internationally since she was 12, she has reached veteran status on the circuit, and is beginning to look elsewhere for a long-term career.

“There’s not much money in the sport, and you finish really young,” Eade  said.

“I’ll probably finish in the next couple of years, so I’ll only be 23 maximum, and I won’t have earnt much money.

“So I need to have a career that’ll keep me going for the rest of my life.

“You do gymnastics, and once you finish, you go to normal life, you study, you get into the workforce and you try to earn your way like everybody else.”