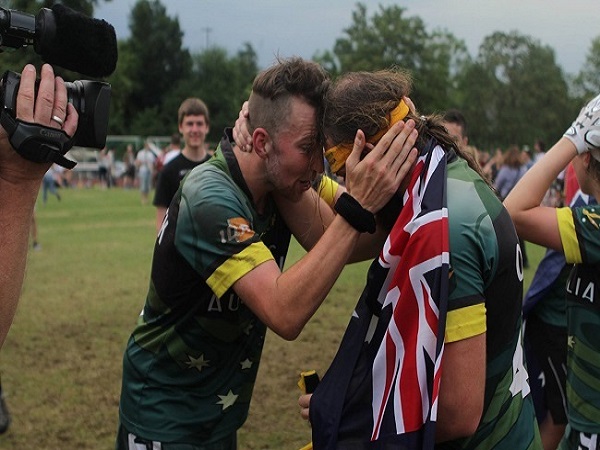 Australia has a new world champion.

The sport of Quidditch has been running for over a decade and is an adaptation from the fictional sport in JK Rowling’s Harry Potter series.

Rather than flying, players hold a broomstick between their legs, throwing quaffles, dodging bludgers and chasing the golden snitch.

The strictly co-ed, full contact sport is unique in that it only allows a maximum of four players who identify as the same gender on the pitch at a time.

In a tense final, Australia took down the previously undefeated USA 150-130, which came down to the final snitch catch.

The Dropbears had added motivation to win following their 2014 World Cup final loss to the US.

Australia was crowned best in the world over the other twenty nations that competed, including fierce rivals, the UK, Canada and France.

“I’m probably the least Harry Pottered of anyone on the team,” Mortensen says.

“I took up quidditch two years ago to try and impress a girl I was really into at the time and fell in love with the sport and the community,” he says.

“The sport is incredibly inclusive, the nerds (a term used lovingly) have developed into incredible athletes and are now sporting world champions.”

“Australia winning the World Cup is a massive coup. The USA had never lost a match. Ever.”

Personally however, he described the feeling of being a world champion as hollow.

“I poured so much of myself into achieving a goal that in the end, the achievement was the bad part, now I don’t know what to do with myself.”

“I don’t play any other sports, I don’t care about the running around and jumping. What I love is that this game really means something to so many people for so many different reasons.”

Whilst Mortensen may have felt conflicted over the Dropbears win, his pride in his team is palpable.

“My achievement means nothing compared to some of them.”

“We have people like Luke Derrick who played in the last World Cup and has since lost a lot of weight playing Quidditch and people weren’t recognising him at this year’s Cup and is now considered one of the best players in the world.”

“We have a girl called Cassie, she’s an unassuming nurse from Victoria who scored more points against America in a single game than entire countries did at this tournament.”

“The sport truly is for all people, look at Shu Ying Lee, a five foot two Asian girl who smacks the crap out of blokes twice her size.”

“All these people have achieved something they can be incredibly proud of.”

The success of the Dropbears didn’t come with the glitz and glamour of other major sporting tournaments.

“The facilities were like what you’d expect if you just turned up at a uni to play.”

“We don’t get paid, you’ve essentially got a bunch of uni students trying to organise themselves to do something they enjoy and that’s not always easy.”

Quidditch has strength in its uniqueness but it is also a huge hurdle to its continued success.

“In such a small community, everyone is a player, an umpire and an official and that gets messy, players often have to sit out and help organise so that everyone else can play.”

Mortensen, who plays as a chaser for the team, credits the Dropbears’ triumph to a dramatic turnaround in organisation from the last World Cup two years ago.

In the two years Mortenson has been involved in the sport he was put on the Australian Quidditch Association board and shortly after elected President.

He stepped down as President when he was elected team captain to focus on captaining the team.

Despite being “old” at age 30, Mortensen says he “has a few more years left in [him]” and hopes to play in the next World Cup.

Preparations have already begun for the Australian Nationals to be held this December at the AIS academy in Canberra.

Robinson is a second year Bachelor of Media and Communication (Journalism) student at La Trobe University. You can follow him on Twitter here: @jesse3robinson