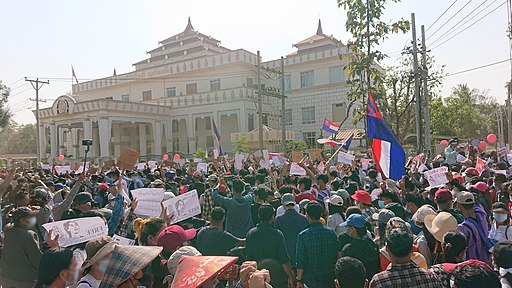 Australia has suspended its military ties with Myanmar following the killings of 50 anti-coup protesters.

The Morrison government has now redirected aid to non-government organisations, in response to the escalating violence in Myanmar.

In a statement overnight, Foreign Affairs Minister Marise Payne said that Australia was weighing up its diplomatic response in the wake of recent violent protest relating to elected leader Ang San Suu Kyi being detained.

“Australia has raised our grave concerns about the military coup in Myanmar and the escalating violence and rising death toll following the events of 1 February,” Senator Payne said in a statement on Sunday night.

“We condemn the use of lethal force or violence against civilians exercising their universal rights, including the right to freedom of expression and peaceful assembly.”

The Morrison government has raised serious concerns for Sean Turnell who is being detained in Yangon. Turnell is an Australian economics professor and adviser to Ms Suu Kyi.

Senator Payne has called call for the immediate release of Professor Sean Turnell.

Payne said the bilateral Defence Co-operation Program with Myanmar’s military will be suspended.

“Australia has had a limited bilateral Defence Co-operation Program with Myanmar’s military, restricted to non-combat areas such as English language training,” she said.

The Australian government is now re-directing its development program to the most vulnerable and poor communities in Myanmar including the Rohingyas and other ethnic minorities.

The re-prioritising of aid would address “the most pressing humanitarian and emerging needs and seek to ensure our humanitarian engagement is with and through non-government organisations”.

According to the United Nations, security forces have killed more than 50 people since the military detained Ms Suu Kyi, with a further 1700 civilians being detained under the military junta.

The democratic official’s cause of death is yet to be confirmed.