While Australia has made improvements in our treatment of animals, those that are used in circuses are still suffering at our hands, writes Katherine McLeod.

The use of animals as circus entertainment is an issue being debated internationally. In America, new legislation to protect animals and stop them from performing is being rolled out state by state; in Australia, the laws are not as clear.

Recently, the New South Wales Greens party began calling on the state government to abolish the inhumane treatment of performing animals. By asking supporters to sign their petition, the Greens are calling on the Senate to realise that this ethical stance recently taken by councils around the country means that it is time to stop the barbaric treatment of animals.

In Australia, legal protection varies between the states and territories. A code of practice for animals being used in a circus does exist, however compliance with the code is only currently mandatory in Queensland, New South Wales and South Australia.

While state and territory animal welfare legislation exists, it merely sets out minimum standards for handling, treatment and transport of animals.

“It is practically impossible to satisfy the behavioural and welfare needs of an exotic animal in a travelling circus,” she tells upstart.

“Living conditions cause severe stress and frustration amongst animals and behavioural abnormalities can develop such as pacing amongst tigers or swaying or bobbing amongst elephants.”

Many circuses engage in abusive and often cruel methods of training in order to bend their animal’s will, and gain control. These methods usually do, in fact, meet the international standards of animal training.

Animals that are used in circuses are frequently subjected to months of travelling in small cages, and are often left to battle extreme temperatures.

This does not allow for animals to engage in their natural behaviours, as once the show is over, they are put back inside their cages.

In 2010, the Australian Perry Bros Circus and Zoo came under fire from animal rights groups for their treatment of their only elephant. Saigon was then 55 years of age, and although no longer able to perform in public, was still made to travel with the company.

When passersby observed her standing in a dusty patch of vacant land surrounded by an electric fence, the circus was soon called upon to change their actions.

She was slowly shuffling on her feet, and swaying sadly. With no pool to cool herself off in nearby, Saigon was covered in dust.

When questioned by the Herald Sun, Lorraine Maynard of the Perry Bros Circus, said that, “She was bred in captivity, born in captivity and we are the only family she has ever known. You couldn’t introduce her to another herd – they’d kill her – and she’d die from fretting if you separated her from us.”

“We can expect the RSPCA inspectors, even the police, to visit us at just about every town we stop at and they are welcome to pop in,” Maynard told them. 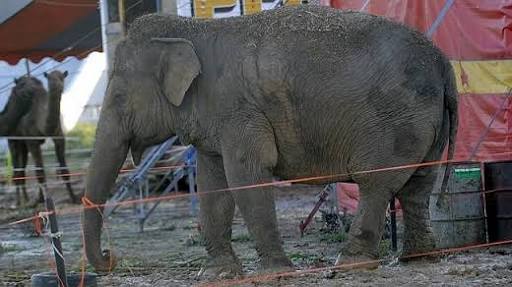 Photo by Amy of unleaded.org.au

However, Kidd argues that these behaviours aren’t in the normal scope of animal psyche.

“These behaviours are scientifically acknowledged to be indicators of impaired welfare,” she says.

“Similar symptoms have been recorded amongst animals kept in captivity at zoos, another means by which we use animals for entertainment.”

Recently, Melbourne joined 45 other Australian councils in banning exotic circus animals from performing in its borders, meaning that circuses with animals such as big cats, elephants and other exotic creatures will no longer be allowed to perform there.

While it’s nowhere near being implemented Australia-wide, it is an important step in animal welfare.

“The decision to allow circuses with animals to operate in an area currently lies with individual councils,” Kidd says

“The push for animal circuses to become illegal needs to come from members of the public recognising that keeping an animal caged for much of their life and making them perform is cruel, and demanding that their local council ban animal circuses.”

The RSPCA also opposes the use of circus animals. Like Animals Australia, they are opposed to the use of animals as entertainment where pain, injury or suffering is a likely outcome.

In the specific case of circuses, they are against the use of non-domesticated animals such as monkeys, lions and elephants, and exotic species, as the lives they lead when performing are not consistent with their social, physical and natural behaviours.

A study completed by the University of Bristol, in 2009 found that “unless the species or individual required a small living area, had a simple social structure, low intelligence and could tolerate frequent transportation, then they would suffer.”

The study concludes that “the species of non-domesticated animals commonly kept in circuses appear the least suited to a circus life including lions, monkeys and elephants”.

It seems that although progress has been made, there is a long way to go before we are responsible in the way that we treat animals.