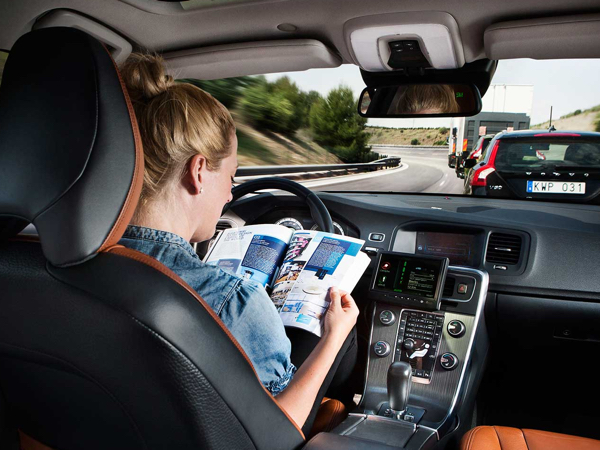 Autonomous cars have long seemed a fanciful mode of transport, unlikely to play a role in everyday life anytime soon.

The reality is the technology to kick start the driverless revolution already exists, but most consumers experience it in a limited semi-autonomous form.

Semi-autonomous features like adaptive cruise control, lane guidance, and automatic parking, support the driver who remains responsible for the overall operation of the vehicle.

In comparison, an autonomous car accelerates, brakes and steers itself, relieving the driver of all duties associated with controlling a standard car.

CarAdvice Senior Editor Mike Costello says the emergence of such technologies represents “the most seismic change” the automotive industry has ever seen, bringing with it convenience and complexity in equal measure.

“We’re going to have to be careful moving forward to make sure that the licensing systems do require people to have some element of human input in cars,” he tells upstart.

Costello says people involved in developing autonomous vehicles generally expect the best-case scenario for those driving them will be similar to a pilot flying a plane.

That is, while an autopilot device enables a plane to fly itself, the human pilot still needs the knowledge to control every aspect of the vehicle if circumstances dictate they must intervene.

“You never want to get to a place where people don’t know how to control a car should something go wrong, or should they need to take over,” he says.

“You may not need to use the skills, but you kind of need to have them.

“The other issue is how are we going to keep those skills sharp, considering people aren’t going to be using them in the real world as much. I think it’s sort of challenge that no one has quite figured out how to answer yet.”

VicRoads Acting Director of Road User and Vehicle Access Christopher Freethy says although research indicates automation features can lead to driver skill loss and behavioural adaption, it is too early to recommend any specific changes to the current system.

“While we adapt to this new technology, there may be new safety challenges created that require us to re-evaluate aspects of our current approach to driver’s licence testing.

“Where necessary, we’ll take steps to ensure that these technologies don’t affect our ability to assess a driver’s readiness for licensing.”

How would you solve the autonomous car problem? https://t.co/5ubsv6UADi pic.twitter.com/vLMidw36Mv

VicRoads allows parking sensors and rear-view cameras to be enabled during the driving test given they are now common safety features across the automotive market.

However, popular cars among young drivers like the base model Hyundai i30, Ford Focus and Mazda 2 are already being fitted with more sophisticated semi-autonomous devices as standard, including emergency brake assist and blind spot monitoring.

While reducing the impact of human error is crucial to preventing road accidents, aids of this nature offset a lapse in driver awareness to a far greater extent than those currently permitted in the driving test.

This entrusts VicRoads with a delicate balancing act between keeping its testing methods up to date without letting technology gloss over driver inexperience.

“There has to be an element of moving with the times. It wouldn’t make sense to have kids doing their licence now, driving some old Kingswood with a four-speed manual gearbox and no safety features,” Costello says.

“You have to factor in what the majority of cars are going to have and then base the test on that. When we get to a point where the vast majority of cars have some element of autonomy, then you can allow tests to use that. But until it’s mainstream, I’d not do it.”

The crossover period when autonomous and non-autonomous vehicles are sharing the road is predicted to be awkward, but Costello says introducing a licence specifically for self-driving cars is not the solution.

“That would probably add a lot of complexity to an already fairly complex system,” he says.

“What the 120 hours [of learner driver practice] gives you more is road sense. You see more things happen, you start to understand the mistakes that others make, you start to see patterns, you get more comfortable behind the wheel.

The public release of autonomous vehicles – which could occur to some extent as soon as 2017 – will give rise to an entirely seperate licensing issue relating to monitoring, liability and insurance.

Volvo, one of the leaders in autonomous technology, has said if one of its vehicles causes an accident while in its IntelliSafe Autopilot mode, the company will accept full legal responsibility.

Costello says this world-first policy will not be ubiquitous, and holding a licence will be compulsory to operate a driverless car for the aforementioned reasons alone.

“Ultimately, somebody has to be accountable for an accident, and generally speaking it’s going to be the person behind the wheel, or whatever device is used to steer the car.”