He was the man responsible for Australia’s tough stance on asylum seekers and detention centres, not to mention protecting the security of Australia against counter-terrorism issues. Little wonder, then, that Australia’s former immigration minister and attorney general, Philip Ruddock, was one of the nation’s most controversial politicians. 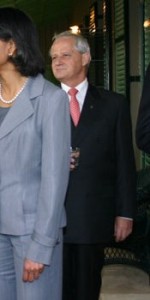 Ruddock’s extensive career in politics has spanned almost 39 years, following his election in 1973, making him Australia’s third longest serving parliamentarian and ‘the father of the House of Representatives.’

So how does one last this long in the world of politics?

Ruddock saw his late father Max Ruddock, who was also a member of the NSW Parliament, as a tremendous role model who greatly influenced him to embark on a career in politics.

‘He was a remarkable achiever and a brilliant man’, he says.

In his role as Australia’s longest-serving immigration minister (1996-2003), Ruddock received much criticism – plenty of it personal.

‘The substantial questions of public policy should be resolved on their merits and you shouldn’t attack the individual doing their job,’ he comments.

Nevertheless, although Ruddock describes his role as immigration minister as  a ‘difficult’ portfolio, he also maintains that it was a ‘great privilege to serve in the role, to play a part in nation building.’

Having restructured immigration programs to shore up public confidence, Ruddock says, ‘It was a great thing to be able to do because I think that it’s important for Australians to be accommodating and generous with their immigration program, one which they have confidence that has been well conducted.’

Apart from serving as immigration minister, Ruddock also served as Australia’s attorney general (2003-2007), a role in which he found protecting the security of Australia his most challenging obligation.  As attorney general, Ruddock was responsible for domestic security and counter-terrorism issues which he says, ‘Loom very large in your consideration to the point that you could lose a perspective as there are other issues you need to deal with, and some of them quite delicate, and some of them quite challenging.’

In his role as attorney general, Ruddock also implemented major reforms in relation to family law and commenced a process of codifying personal property security in a way  which ‘will be beneficial for Australia.’

Nowadays, Ruddock, who since 1992 has been the federal member of Berowra in NSW, describes representing his electorate as a great privilege.

He passionately describes his electorate as ‘unique and very special – we are the lungs of Sydney, we grow many of the products that the Sydney populous is able to enjoy.’

Ruddock says that among a range of important issues in his electorate, the most critical issue is the linkage between Melbourne and Brisbane through Sydney in terms of national roads.  ‘It’s an absolute disaster,’ he says.

‘In terms of infrastructure building, that this has not been addressed and it needs to be. It’s a matter I am pressing for very strongly,’ he adds.

Having travelled extensively throughout his working career, Ruddock says that his most satisfying travel highlight was ‘the time I spent trying to understand the plight and circumstances of refugees around the world.’

In fact, Ruddock’s travels in Africa which led him to camp Kakuma, where southern Sudanese sought refuge in Kenya, prompted him to initiate the first re-settlement programs for southern Sudanese refugees.  Ruddock says this was ‘important for identifying people in need who had been targeted – people for whom new opportunities needed to be found.’

As a man who has served and represented Australia for close to four decades, Ruddock has not lost any of his passion.

‘Australia is a remarkable country, with extraordinary talented people and we need to free up those talents in order to build a more prosperous Australia. We need to be an example to the rest of the world of what can be done if we unleash all of those talents.’

Mandi Santic is a second year Bachelor of Journalism student at La Trobe University. You can follow her on Twitter: @candimandi