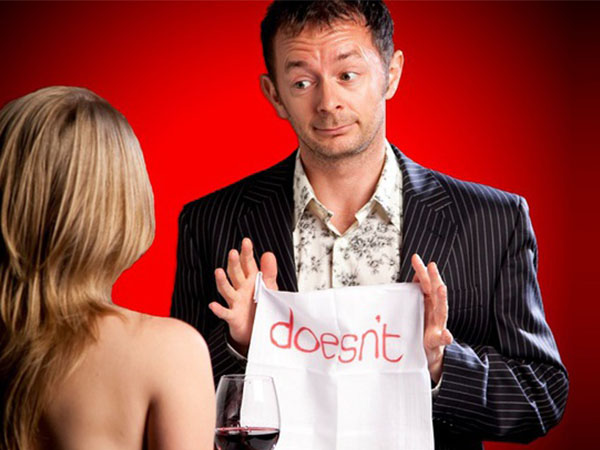 Mark Butler is performing his new show at the Grand Mercure Hotel, an intimate set-up with a capacity of about 70.

This stage allows Butler, a comedian with an affinity for banter, to engage his audience with sharp, intelligent material.

The humour in Grammar Don’t Matter on a First Date exemplifies Butler’s witty style and, according to him, it’s “unsuitable for bogans”.

Butler is a self-professed grammar snob. His show details many of his past relationships that fell apart due to his partners’ poor grasp of the English language. Throughout the performance he is energetic and vociferous as he recalls many of these failed relationships and the grammatical errors that lead to their demise.

Bouncing back and forth with the audience to ascertain the general consensus in the room, he asks:

“Is the overuse of exclamation marks acceptable in a relationship? Or is the incorrect use of you’re/your a break-upable?”

It’s a harsh crowd, with the majority asserting that most of the common grammatical errors are unforgiveable in a relationship – perhaps that’s why there aren’t a lot of couples in the room. Members of the audience fervently agree with Butler as he divulges his hatred for the incorrect usage of “literally” and his detest for “double negatives”.

Crowd interaction is a key part of Butler’s show. Giving audience members the chance to vocalise an opinion on grammatical errors is a bit of fun and, judging from the shouts of some audience members, they’re recalling an ex-partner who frequently made the fatal mistake. As a result, the small room is buzzing with laughter, shouts and Butler’s impassioned voice.

Butler has been performing stand-up around the world since 1998. His comedic style seems to appeal to a wide demographic, with the crowd ranging from university students to elderly couples.

To the front left of the stage, there’s a couple who Butler continually interacts with – they’re on their third date and he correctly picks that they met online. The subtext for the show is advice to couples, and much of the attention is directed towards this new relationship. It makes for quality banter and the attention only makes the couple laugh more loudly.

The show goes for about an hour and, as Butler continually touches on common grammatical errors and Australianisms, some members of the crowd look slightly embarrassed as they realise the amount of errors they make regularly.

The show draws to an end after about an hour and Butler comes to join me for a beer and a chat at the bar. I’m conscious about speaking with correct grammar – I don’t want to look like an idiot in front of the self-professed grammar Nazi.

However, Butler’s off-stage persona is far more laidback than his comedy routine would suggest. He’s friendly and down to earth – as long as you don’t say “youse”. Poor grammar really does frustrate the comic.

“I’ve been irked by grammatical errors for a while, and when I was dating a girl who made a lot of them it made me realise she wasn’t the one for me,” he says.

From then, Butler began using grammar as a screening tool for partners. This became the inspiration for his show, which Butler did not expect would attract the audience it has.

“It has struck a chord with so many like-minded pedants that it makes me feel like I’m not alone in this world,” he says.

For Butler, comedy is a platform for self-expression.

“Primarily Grammar Don’t Matter on a First Date, was written for me,” he says. “It’s quite wonderful being able to ramble on about topics I care about and make people laugh at the same time.”

Having given up on plans to “conquer the world”, Butler wants to continue making people laugh by being “fresh and inventive”.

The overall goal of Grammar Don’t Matter on a First Date is to make people laugh, but the secondary point is to show that grammar is important.

“If I can make someone see the world differently, that’s the ultimate in flattery,” he says.

Butler will be performing at the Melbourne International Comedy Festival until 19 April. Fans of wordplay, grammar and wit can find out more about the show here.