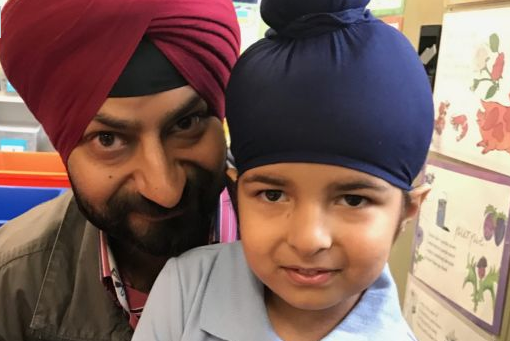 A father is fighting for his five-year-old son’s rights after Melbourne school banned his traditional Sikh turban.

Sidhak Singh Arora was hoping to start at Melton Christian College this year, but the school did not accept his head covering due to their uniform policy.

The family has launched legal action claiming the Victorian Equal Opportunity Act was breached by the school.

The student’s father Sagardeep Singh Arora, has claimed that the school is discriminating against his son on religious grounds.

“I was very surprised in an advanced country like Australia, they are still not allowing us to wear patka in the school,” Mr Arora told the ABC.

Since the ban, Sidhak has started at another school.

“If you’re enrolling a student from a different community, you should allow them to practice their religious beliefs … they should not be forced to abandon their faith,” Mr Arora said to The Age.

Melbourne father fights for son’s right to wear a turban at a Christian school https://t.co/wNrvm5P1x4

Principal David Gleeson told the Victorian Civil and Administrative Tribunal that he was proud of the “neutrality” of the uniform.

“He’s identifying himself as something other than the identity of the college and that creates a difference, that takes away the level playing field for himself and other students in the school,” he said.

The ban has attracted the attention of The Sikh Coalition, an American organisation seeking to protect the right to practice Sikh faith.

Elizabeth Bennett, Lawyer for the commission, told the tribunal that the exemption was being inclusive, not exclusive.

“It is intended to allow a group to include those it seeks to advance,” she told The Age.

Although the school has rejected any act of discrimination, the hearing will continue on Wednesday.