One phone call in October changed her life. 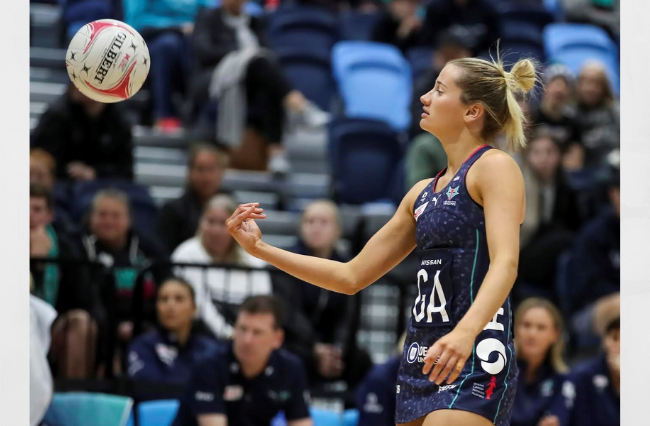 Seven months ago, Ruby Barkmeyer was watching the Melbourne Vixens defeat the West Coast Fever to win the 2020 Suncorp Super Netball premiership from her lounge room.

Fast forward to 1 May, the 20-year-old found herself blinded by the stadium lights as she ran on to John Cain Arena’s court to make her professional debut.

But for Barkmeyer, the last year has been anything but easy.

Retreating to her home in Kangaroo Flat as the Vixens flew to Queensland to embrace the hub life, Barkmeyer was left to rely on self-motivation and zoom calls to keep up her skills over the pandemic.

“Finding the motivation to get up every day and train when you weren’t really sure what you were training for was hard,” Barkmeyer said.

Keeping fit was worth it for the young talent though. In October, she finally got the zoom call she had been waiting for. It was Vixens’ head coach Simone McKinnis, offering her a permanent position in the Vixens ten for the 2021 season.

“I guess it did come as a surprise as I was not expecting it at all this year. I would have just been grateful to be able to get another opportunity to train in an elite environment,” Barkmeyer said.

With the retirement of Australian Diamonds shooters Caitlin Thwaites and Tegan Philip, the La Trobe University student has big shoes to fill.

Barkmeyer said she doesn’t focus on replacing the international stars, but rather on what she can bring to the team and how they can work together this year.

“I don’t think anyone can really replace Caity as she was such a big target in the attack end for so many years at the Vixens,” she said.

Barkmeyer’s athleticism and versatility have allowed her to feature in a collection of national representative teams, the latest being the Australian Under 21 World Cup Youth Squad.

Growing up, Barkmeyer watched fellow Bendigo local Sharelle McMahon shoot her way to sporting stardom on the international stage, inspiring the Victorian representative to pursue a career in netball.

“It’s pretty cool that she gets to tell me what to do every day at training, she brings so much to us in the attack end. We’re really lucky to have her,” Barkmeyer said.

Joined by Malawian superstar and 2020 Grand Final MVP Mwai Kumwenda under the post, the Vixens fan favourite doesn’t have a collection of advice to offer her new shooting partner.

“MJ doesn’t say a lot, but when she does speak up you really want to listen because she does have quite smart advice out there on court…MJ’s obviously had a wealth of experience, she really just says ’you know you’ve got to work hard, nothing is easy once you’ve made it’,” Barkmeyer told upstart.

In the goalers 38-minute debut, she sunk one Suncorp Super Shot and a further four goals to establish her presence in the league.

Balancing netball and university commitments is difficult for the young athlete as her schedule changes daily. But the La Trobe University’s Elite Athlete Program has helped her manage both study and sport.

“The elite athlete program really helps me to organise my time so that I can share it equally between both [netball and university] and not fall behind in everything,” she said.

Barkmeyer has always had a passion for helping others, especially children.

Studying a Bachelor of Primary Education, she said she knew teaching was for her after running coaching clinics and drills with budding netballers across Victoria.

“I really enjoyed that side of things and working with younger children and seeing them enjoy what they do was when I thought that teaching sounds like the right thing for me,” she said.

Nothing was ever handed to the 20-year-old, travelling to and from Bendigo regularly growing up to pursue a sporting career. It wasn’t until the morning of her debut that she realised it was all worth it.

Barkmeyer walked to John Cain Arena with her brother and father before her debut, making sure to keep a few steps ahead to calm her nerves and reflect on her journey.

Article: Jessica Miles is a second-year Bachelor of Media and Communication (Sports Journalism) student at La Trobe University. You can follow her on Twitter @jessicamiles01.