Over 3000 people gathered outside the State Library to stand in solidarity with Black people who have suffered violence by the police and vigilante groups all around the world, Rachael Roberts reports. 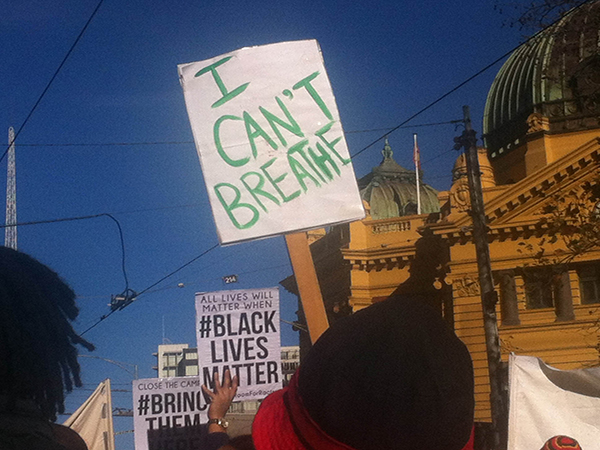 The recent shootings of Alton Sterling in Louisiana and Philando Castile in Minneapolis have triggered renewed protests in the Black Lives Matter movement.

Earlier this week, Sydney held their own rally and yesterday thousands of Melburnians stood in solidarity with the American movement and express their outrage about the treatment of Black people in the Australian prison system.

“Australia may not suffer from the gun violence, but the injustices faced by refugees, immigrants and most of al,l Indigenous Australians are truly upsetting,” said one of the organisers, Takara Allen.

It has been 25 years since The Royal Commission into Aboriginal Deaths in Custody delivered its findings and recommendations. However, since then there have been 365 reports of Indigenous deaths in custody and are still 13 times more likely to be imprisoned than non-Indigenous Australians.

As the crowd began to assemble at midday, a small counter rally stood outside the library wearing masks and holding a banner saying “blue lives matter” in reference to the recent police shootings in Dallas. The police stood between the two groups but the counter rally was moved on before the Black Lives Matter speakers begun.

One of the event organisers and blogger, Yarramun Conole, spoke out against discrimination, racial profiling and the over representation of Indigenous people in prison.

“There has been 300 recommendations [after the royal commission] and only a few have actually been put in to practice and I think that really shows that the government really doesn’t care for Black lives in this country. We are told that we’re dole bludgers, that we’re good for nothing and we’ll never be good for anything.”

Other speakers shared their thoughts, experiences in passionate and sometimes tearful speeches and called for group hugs, action, and photos to raise awareness.

After the speak-out the crowd walked to Flinders Street station to perform a sit-in at the intersection.

Despite a strong police presence including a riot squad the march was peaceful and there were no arrests.

Rachael Roberts is upstart’s outgoing Media Editor and a third-year Bachelor of Journalism student at La Trobe University. You can follow her on Twitter: @1rachaelroberts.