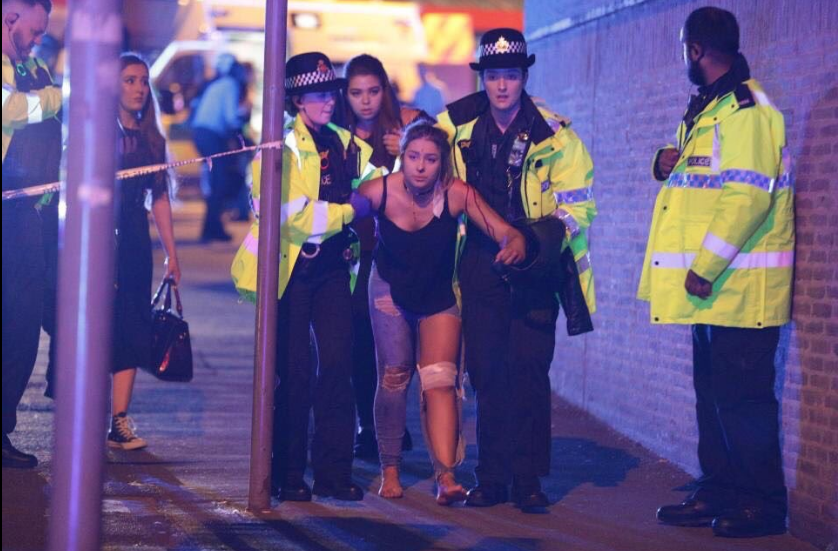 Police have confirmed at least 19 people are dead and about 50 people injured after an explosion rocked Manchester Arena at an Ariana Grande concert at 10.33pm Monday night UK time.

Greater Manchester Police are treating the incident as an act of terrorism and have urged people to avoid the area.

In lock down mode, emergency services are at the scene treating the injured as frantic parents hunt for missing kids.

Panic gripped the crowds, mostly young teenagers and children, as a bomb exploded in the public foyer of the Manchester Arena, which has a capacity of 21,000, at the end of the concert.

Witness Jane Pearson, 46, who attended the concert with her 21-year-old daughter as a birthday treat, was sitting not far from the explosion. She describes the mayhem that filled the Arena shortly after the loud explosion and clouds of smoke.

“…absolute chaos. Disbelief, everybody running over each other not quite knowing what had gone on. Mad chaotic rush to nearest exit, lots of people crying and wailing. Really upsetting for everyone concerned.

“There was people bleeding, and lots of people being separated, very scary, very upsetting but obviously we believe there has been fatalities”, she told The Telegraph.

Social media quickly came on board soon after the incident to assist with locating missing concert goers and sharing offers of help for anyone affected.

Facebook activated its safety check enabling people at or near the Arena to inform family and friends they are safe while Twitter’s hashtag #RoomForManchester is flooded with offers of accommodation and support for those affected by the explosion.

According to The Guardian, buses “have been pressed into service to ferry people out of the area; some local taxi companies are also offering free rides for those affected.”

Trains running underneath the Arena have been cancelled.

Minister of State for Security, Ben Wallace, has urged the community to report any suspicious behaviour.

In the latest statement on the incident by General Manchester Police, Chief Constable Ian Hopkins confirms his team is working with “national counter terrorism policing network and UK intelligence partners” in efforts to gather all information.

Universal Media Group, Ariana Grande’s music label put out a statement: “We are deeply saddened to learn of tonight’s devastating event in Manchester. Our thoughts and prayers are with all those affected by this tragedy.”

broken.
from the bottom of my heart, i am so so sorry. i don’t have words.

Prime Minister Theresa May, who has halted all election campaigning, has issued a statement offering support for victims and families affected.