Cheerleading on the field is not her only sport. 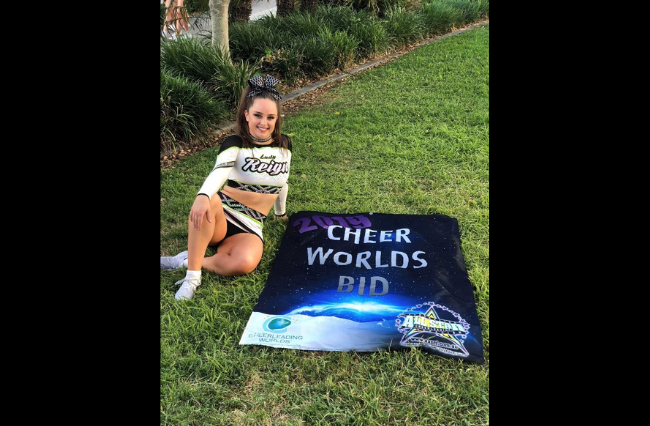 Caitlin Dagher was packing up when her team was called to advance for the second day of the Cheerleading World Championships.

In 2019 at Disney World in Florida, Dagher and her team Lady Reign of Southern Cross Cheerleading, had given up. Nine teams have already advanced to the next round. The underdog Australians thought they had no chance in a sport dominated by American and Canadian teams.

But fate had other plans for the little team from Australia.

The feelings of disappointment were overcome by euphoria as Dagher describes her favourite moment of her 22 years alive.

“We were like ‘oh my god’ we were done. We thought we were done. We did not think we were good enough and then like final moment, 11th hour, they had called us up to day two and I think, all the hard work in that moment was for that,” she tells upstart.

“Was it the moment I’ve been working for? I can retire, yeah, that was incredible.”

If you told a young Dagher years ago that she would be ecstatic about her accomplishments as a cheerleader, she would have been mortified. Starting as a gymnast at just two years old, she found cheerleading abhorrent.

“When I was 12 years old, I was at the National Championship Gymnastics and they have a cheerleading exhibition next to us. I watched them and I thought they were terrible,” she says. “I will never be a cheerleader. I hate cheerleading. They suck, we’re so much better.”

After taking a break for a few years Dagher found that gymnastics was unaffordable as an adult and cheerleading came to the rescue.

“A cheerleading gym had a drop-in tumble session, so I was like, I’m going to pay five bucks to this gym so I can use the floor and tumble and from there they reeled me in and I have not looked back,” she says.

But cheerleading is also tough as Dagher shares her typical week as a cheerleader.

“Sessions last for about two and a half hours each so it’s two weeknights and one morning on the weekend,” she says. “We have to do a certain amount of strength training or cardio training each week … and that’s one or two extra nights … five days a week I would be training.”

Dagher also keeps herself busy during her extra time. She studies law and psychological sciences at La Trobe University striving to attain a career in law. She does admit that it sometimes interferes with being an athlete.

“[Working in law] definitely comes to odds a lot with also trying to be an international athlete, but it’s definitely one of my passions,” she says.

Dagher works at Maurice Blackburn three days a week as a paralegal doing client intake helping direct people to the best legal help. But as COVID-19 took over the world last March, Dagher and her friend Samara found another way to keep themselves busy by starting a podcast called ‘In The Know’, which aims to provide young people with access to legal advice.

“In the depths of COVID, we’re really bored … and we had a period of time where we didn’t really know where our passion was,” she says. “We started the podcast as a way for young people to make legal stuff accessible. Just practical knowledge as a passion project whilst we couldn’t do our actual passion.”

Despite her exhausting schedule, Dagher has her eyes set on gold at the World Championships as society slowly reopens amid the waves of COVID-19 across the globe.

“I would love to win a World Championship. I think as much as I can, I’d like to hold on to the next few years to see if I can get a chance to at least go for that goal, I don’t think I feel done with the sport without having at least really tried to get that.”