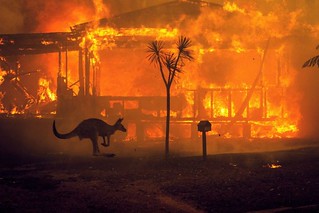 A new recommendation by the Emergency Leaders of Climate Action (ELCA) has called for a levy on the fossil fuel industry to help pay for damages of natural disasters.

Late last year, just as the COVID-19 impacts started to take a hold of the world, the ELCA announced they would host a summit after the bushfire season following disappointments in a lack of leadership from the government. The ELCA called for the emergency summit over June and July in an effort to take matters into their own hands after several attempts to alert the federal government of catastrophic weather events were ignored for over a year.

The coalition of experts says that the government severely underestimated the rapid increase of climate change that inevitably led to the summer tragedies.

“Sadly, those warnings fell on deaf ears and, as the world watched on in horror, those same warnings became a harsh reality,” the report said.

The summit brought together former emergency leaders, climate scientists, doctors and members of the community to propose a set of recommendations to confront the increasing risk of future bushfire devastations induced by climate change.

The summit, which took place over a series of virtual events, issued a report that suggested 165 recommendations that included practical emergency plans and fire and land management strategies that government could implement to help reduce worsening fire conditions.

Some of the report’s key recommendations included calls for more resources to help detect and maintain new outbreaks, incorporate aerial firefighting capabilities to Australian fire services and the introduction of an Indigenous-led National Cultural Fire Strategy to aid in fuel management.

One of the key recommendations is a national climate disaster fund financed by an imposed levy on the fossil fuel industry. The report insisted that the fund would help pay for the impacts of natural disasters and ensures Australia becomes more self-sufficient instead of relying on international aerial assets.

The ELCA says the recommendations will cost billions of dollars but is a necessary investment in reducing the impact of future natural disasters.

Photo:  Australia fires explainer 2 by Bruce Detorres available HERE and used under a Creative Commons Attribution. The image has not been modified.