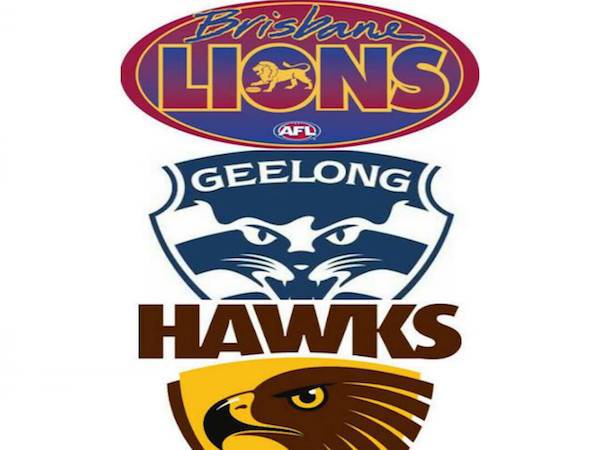 Since the year 2000, three teams have dominated the AFL.

The Brisbane Lions won consecutive premierships in 2001-03, Geelong won biennially in 2007, 2009 and 2011, and last weekend, Hawthorn completed their own hat trick.

In light of this, upstart‘s sports team have debated which team deserves to be regarded as the best of the modern era.

In 1998, the newly-formed Brisbane Lions finished last on the ladder, and decided to sack their coach, John Northey.

After the Fitzroy-Brisbane amalgamation the previous year, the club needed to make bold decisions in the face of poor on-field performance and financial turmoil.

The club reached out to player of the century and 1990 premiership coach, Leigh Matthews.

The wheels were in motion, and by 2001, the Lions had rejuvenated.

Matthews took the once fledging club to a grand final – coming up against Essendon, who had won 62 of their past 73 matches – but a premiership still seemed beyond them.

Just before half time, the Lions’ situation appeared dire.

A heavily bandaged Scott Lucas launched a left-foot bomb from well outside the 50-metre arc, putting the Bombers 20 points in front.

But what followed was incredible.

Like a cherry blossom in Melbourne’s spring heat, the Lions began to flourish in the second half of the match.

Just after half time, Marcus Ashcroft goaled in his first kick of the match, and in the blink of an eye, the Lions produced six goals to one, in the term aptly named ‘the premiership quarter’.

This was the beginning of a dynasty.

From there, the Lions became the hunters. They had finally attracted the recognition of the football world.

With an undisputed great of the game at the coaching helm, and a midfield that would inevitably boast three Brownlow Medallists (Voss, Jason Akermanis and Simon Black), the Lions became September specialists.

Despite claiming back-to-back-to-back premierships in 2001, 2002 and 2003, to this day, Brisbane has never won a minor premiership – a fact that reflects their dominance in the finals.

During their premiership years, they destroyed the opposition.

Out of the 10 finals they played in, they won nine; their average winning margin was 44 points.

They became the first side to win three consecutive premierships since Melbourne in the 1950s.

When you consider the dominance of sides such as Carlton, Richmond and Hawthorn during the 60s, 70s and 80s, and take into account that none of those sides were able to achieve what Brisbane did, the Lions’ spot in football immortality is unquestionable.

If they’re not the best ever, they’re pretty close to it.

The Geelong era started with a searching review process at the end of the 2006 season.

The Cats had a disappointing year, finishing tenth after a heartbreaking semi-final loss to Sydney the year before.

Coach, Mark Thompson, almost had to beg to keep his job. He vowed to change the team’s game plan, encouraging use of the centre corridor, and using handballs to create space for teammates.

The Cats began to take the game on at every opportunity, attacking from the last line defence, their backmen unafraid of marking the ball and playing on to create forward thrusts.

The first time this new game plan kicked in was late on a Sunday afternoon in round 6, 2007.

The Cats rammed home 35 goals against a shell-shocked Richmond side, kicking 20 goals to two at half time, and winning by 157 points.

Their intentions were made clear to the rest of the competition.

This run and gun style proved impossible to beat, and with the previously dominant West Coast waning, there was no serious competition for the year’s flag.

They won two finals by more than 100 points, including a record 119-point thumping of Port Adelaide in the grand final.

The year 2008 was tragicomic for Geelong, with the club dominating at times to ludicrous degrees, particularly in their 135-point belting of West Coast in Perth.

The Cats had only lost one game that year, until the grand final, where they went in over-confident and lost to a brilliantly organised Hawthorn side.

They were jumped by Hawthorn’s pressure and failed to cope with their system. Geelong suffered a bout of profligacy against a less-fancied, but resourceful opponent, kicking 11.23 for the game.

Stung by the loss, the Cats came back in 2009 and grappled with a St. Kilda side that had adopted a system similar to Hawthorn’s.

The two sides were undefeated when they faced each other in round 14.

The Saints won the bruising encounter thanks to a very late Michael Gardiner goal. The match has gone down as one of the best regular season games ever played.

The two heavyweights met again in the grand final. This time it was Geelong’s turn to benefit from their opponent’s wastefulness.

The Cats only won a single quarter of the entire match, but were ahead at the final siren. Tellingly, the match-defining play came about from Geelong moving the ball into the centre corridor.

Geelong missed out in 2010, partly due to their jaded coach, and because Collingwood had developed a system of frenetic pressure that specifically chopped off Geelong’s handball options.

In 2011, they came back under new coach, Chris Scott, and developed a new system to beat the Pies’s press – simply kicking over the top of it.

Derided by critics as “too old and too slow”, the Cats stormed home to win their third flag in five seasons.

It is the fact that Geelong took the long way that makes them such an impressive outfit.

Geelong were simply too big, too strong, too fit and too skilful for their opponents. They beat everyone everywhere.

Although they never won three premierships in a row, consistency was their game.

They played it better than anyone has before and since.

Success is measured in premierships.

Simple addition would show Hawthorn to be the greatest side of the last 15 years.

In contrast to Brisbane and Geelong who have won three apiece, on Saturday the Hawks won their fourth premiership since 2008.

These players are champions in their own right, but have become cornerstones in a team that Alistair Clarkson is able to keep replenishing.

The key to the Hawks’ longevity of success is Clarkson’s ability to develop younger players, and most importantly to recruit smartly.

He’s brought in players from other clubs, including David Hale and Shaun Burgoyne, to boost his side, rather than just relying on the draft.

Brian Lake came to Hawthorn in 2013 after leaving the Western Bulldogs. He retires with a premiership medal for every season he has played, and a Norm Smith Medal for his first year at the Hawks.

After losing superstar forward, Buddy Franklin, to Sydney at the end of 2013, questions were asked about whether they’d be able to win another premiership without him.

On Saturday, he only scored one, but helped the new forward line, Jack Gunston and Rioli, with several scoring assists.

The depth of the team was demonstrated when Ryan Schoenmakers, the last player selected in the premiership side, impacted with one goal and 21 disposals.

Unlike Brisbane and Geelong, the Hawks haven’t needed a Brownlow Medallist in their side to succeed.

Brisbane had three, and Geelong had two.

However, Mitchell, Hodge and Lewis have polled highly in the last three years.

Club president, Andrew Newbold, told the ABC that he’s glad Mitchell didn’t win this year’s award because it would have been a “distraction” from winning the flag.

The club’s last two premierships have been blowouts. They defeated West Coast by 46 points in a game that was arguably over by the beginning of the second quarter. Last year, they won by 63.

While these games aren’t as exciting as close encounters, like Brisbane’s 9-point win over Collingwood in 2002, they demonstrate how far ahead Hawthorn is from the rest of the competition.

Rudi Edsall is a second-year Bachelor of Journalism (Sport) student at La Trobe University. You can follow him on Twitter: @RudiEdsall.