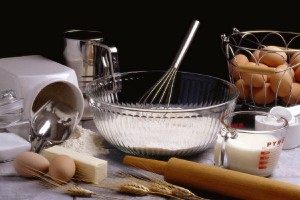 Annabel Crabb, that eminent scribe and sharp mind, bedecked in blocks of colour and the occasional floral print; lips rouged in scarlet – a stark slash of battle red; hair in an elaborate coiffure, bustles about in the kitchen assembling dessert. She has an important date with the more culinary-oriented Canberra elite. Lowering a whisk into a fat puddle of creamy goodness, she tells us that the act of sharing food with politicians, those beady-eyed adversaries suited in prescribed words and obscurity; somehow brings ‘more’ out of them. The premise behind Crabb’s new show, Kitchen Cabinet sounds simple (if not a little offbeat), but what that transient something more is, can only be sensed as the story unfolds.

What is it about this act of cooking and sharing food that adds new textures, dimensions and flavour to a conversation? Is it really that lavish and alternatingly comfortable ritual of sharing food or the fact that we’re just seeing politicians in a different setting altogether, their personalities suddenly visible in the limelight of a different program format? Is it the food or the format? Arguably, it’s a bit of both. (Or quite possibly the liquor).

Going back in time, anthropologist Claude Levi-Strauss was among the first to question why and how humans came to cook and share food around a blazing hearth. Martin Jones, a ‘bio’ archaeologist, in his book Feast: Why Humans Share Food, remarks that in other species, food and fire coupled with ‘direct eye-contact…opening of mouths and the exposure of teeth’ would signal hostility and invite conflict. Replace food in this scenario with a swinging electorate and it isn’t too difficult to imagine politicians regress into that Neanderthal phase of humanity.

All in all, Jones argues, the conversations that flow around structured and unstructured meals ‘continuously put the world into order;’ it is a ‘marker of who our friends and relations are, and what it is to be human.’

Sure this all sounds rather romantic but surprisingly, genuine conversation does make for good television. And with Kitchen Cabinet, the ceremony of food preparation segue ways nicely into a casual session that humanises our political figures without us being forced to read their biographies, watch them stumble confrontationally on Lateline or hear them childishly nag Mr. ‘Speak-ah’ in Parliament. Amanda Vanstone, breathtaking in a floral shirt and apron, taking charge in the kitchen as Christopher Pyne’s voice lurks in the background with the occasional quip. The delightful Nigel Scullion, unrepentant and unapologetic about his misspent youth and semi-nude adventures. Penny Wong – refined, elegant, a little hesitant and forever reflective. Julie Bishop’s permanent game face softens ever so slightly before snapping casually back into place over prawn risotto. And Tanya Plibersek – dignified and honest about family life.

The basis of this slow-cooked show is uncomplicated but the food, wine and charming host do somewhat more than what was intended. Beyond the polite hobnobbing and probing questions, there is something to be said about the way a certain sense of ‘curious intimacy’ is crafted around these otherwise selectively portrayed public figures. It becomes possible to imagine these characters in context of a richer story, not merely a headline. The voyeurism offered to audiences is artful, rather than prurient or parsimonious.

No, you won’t come to suddenly love these Parliamentary personalities– this isn’t a forum for confession or redemption and that’s not the point. Nor does it answer every penetrating question we have about a politician’s mistakes, motivations and life experiences. And at times, the kitchen-to-table formula threatens to become boring. But the show piques a genuine sense of curiosity about the players in the game. When was the last time we wanted to hear more from and more about politicians? Exactly. That is why this show’s format is quietly brilliant.

Certainly the featured politicians are never completely off-guard (Julie Bishop made that quite clear) and perhaps, never without some kind of agenda. And unlike the wine, the conversation at times doesn’t always flow as freely as you desire. But at least when these candidates file carefully into Kitchen Cabinet, free with the knowledge that it’s well-stocked, we’re given a little time to consider politicians as people, without the absurd notorieties, falsities and ever-present veneer of cynicism that has ossified in Australian politics.

Simply said, it’s a welcome change to see our politicians wield knives in an appropriate setting than wax morbidly lyrical about them.

Sheenal Singh is a media honours student at the University of Sydney. You can follow her on twitter @sheenalsingh