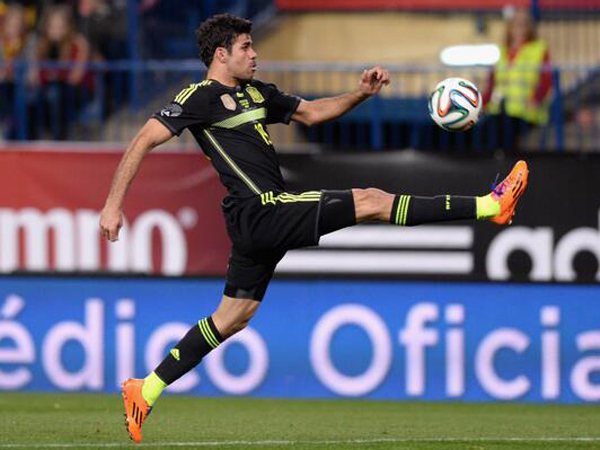 It could very well be one of the most decisive factors in the outcome of the World Cup later this year.

Atletico Madrid striker Diego Costa has become one of the most talked about footballers in the last year, not only due to his phenomenal goal-scoring exploits this season, but more so regarding his international footballing identity.

Costa has spearheaded Atletico into the Champions League final and to the verge of an amazing title win in the Spanish La Liga.

One of the standout players in all of Europe this season, Costa will travel to his country of birth, Brazil, next month as a Spanish team representative.

This is now a common occurrence among players who hold dual citizenships, but not often does it concern a hugely influential player entering the prime of his career and two of the biggest and most renowned international footballing sides on the planet.

Born in 1988 in the north-east Brazilian city of Lagarto, Costa moved to Portugal’s FC Braga in his late teens before signing for current club Atletico Madrid. After several loan spells away and a transfer to Real Valladolid, he eventually found his way back to Atletico and has become a key part of the team’s outstanding revival.

His unbelievable form at Atletico did not go unnoticed by Brazillian national team coach Luis Felipe Scolari, who played him during March 2013 in friendly matches with Italy and Russia.

It would have seemed that Brazil’s struggle to find a lethal centre forward to match and complement their majestic midfield was over. Players are generally not allowed to switch nationalities, but according to the current FIFA rules friendly appearances do not permanently commit a player to one country.

But in September 2013, the Spanish Football Federation made an official request to call Costa into their squad, having been recently declared a Spanish citizen.

As Costa didn’t play for Brazil in what FIFA deems to be a competitive match, such as a tournament, Costa was legally able to be declared a Spaniard in the eyes of the football community.

In March 2014, Spain coach Vicente del Bosque included Costa in his squad for a friendly against Italy, playing a full game in his controversial, long-awaited Spanish debut.

Legally, there is nothing wrong with what has transpired. But this is precisely why many are calling for the current international system to be revisited.

Because of the leniency of FIFA regulations, plenty of other political elements go into picking an international side as well. Approaches to families and players (some legal and some not) are made, while things such as money, sponsorships and the likelihood for game time and overall success all factor into a players’ decision about who they ultimately want to represent.

But for Costa, it was merely a case of cultural capital and belonging; something he felt so strongly about that he turned down the opportunity to play at a home World Cup in front of millions of adoring fans.

“It was a difficult decision but everything I have achieved in my life has been given to me by [Spain]. Wearing this shirt would be an honour for any player and if I play five, ten or even 15 minutes, I will give my all,” Costa said.

Under current FIFA rules, a player is allowed to represent any national team, as long as they demonstrate a ‘clear connection’ to the country they wish to represent.

But in an age of globalisation where people and families can easily move across borders, most current players have a ‘clear connection’ to more than one nation. These players have difficult choices to make, with countries and fans treating their prospective players more like commodities than footballers.

Countries and particularly fans that miss out on an exciting player often bear resentment and, in the case of Costa, it is certainly no different.

Scolari, as well as Brazilian Football Confederation judicial director Carlos Eugênio Lopes and chairman José Maria Marin, hit out at Costa following his decision, with the latter threatening to even strip him of his Brazilian citizenship. But while Costa remains a Brazilian citizen, in the eyes of many in the football-crazed nation he is not.

Spain is not the first country to benefit from these rules and it is likely they won’t be the last as many countries, even Australia, have also benefited.

Given the way modern football and international relations are progressing, should legislation be left as it is, such situations will only increase in frequency.

Many predicted before the Costa incident that the World Cup would most likely go to either Spain or Brazil. So closely are they matched, many hypotheticals will be thrown around should Costa make any kind of impact for Spain in the tournament and indeed beyond.

The football community is a volatile and opinionated bunch and if FIFA come under as much scrutiny as they are expected to, they only have themselves to blame.

Evan Young is a journalism student at RMIT University.