Award-winning artist's attempt to liven up Strachan Alley is blasted away. 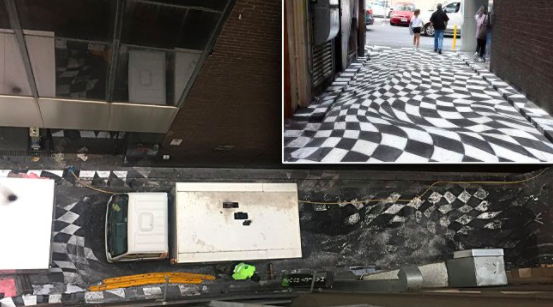 Award-winning artist Vincent Fantauzzo is in a tense standoff with council cleaners as they attempted to wash his mural from a CBD laneway this morning.

Fantauzzo arrived at 9:10 this morning and parked his Ducati motorcycle on the remaining art, halting the cleanup process.

Fantauzzo, a multiple Archibald Prize People’s Choice Award winner,  painted the chequerboard art in Strachan Lane at the start of the month as a way of showing support for street art and to entice people to the laneway.

In the past fortnight people have flocked to the laneway to take photos and appreciate Fantauzzo’s work.

“I’m just devastated, actually. No one until this point has contacted me personally or given me any indication of it being painted over,” Fantauzzo told Fairfax Media.

The chequerboard art in Melbourne’s Strachan Lane is being washed away this morning. MORE >> https://t.co/C2SpjWLhbM pic.twitter.com/ATkCl9Us6p

Melbourne City Council have said the artwork is unauthorised and that the surface could get slippery for deliveries.

Fantauzzo and a team of his friends painted over the mural yesterday with non-slip paint, saying “the only problem would be if someone gets dizzy walking down the street.”

However, it was not enough to save the artwork.

Despite public support for Strachan Lane’s new look, Lord Mayor Robert Doyle would not back down, speaking to Neil Mitchell on 3AW Mornings.

“He didn’t have a permit for it. He got his day in the sun to publicise his restaurant,” the Lord Mayor said.

“When we’ve worked with artists before – and we have – we do permit them and we give them a couple of weeks and then we clean it off.”

The Lord Mayor also said staff have been threatened.

“I’ve been here for two weeks and I’ve heard nothing from the council,”Fantauzzo told the Herald Sun.

The cleanup has sprayed debris on Fantauzzo wall painting of pop star Cyndi Lauper as well as Harley House’s kitchen, of which Fantauzzo is part owner.

“They’ve completely trashed the laneway. All the walls and bitumen are ripped up just because of some paint,” Fantauzzo told Fairfax.

“So what, are they going to ask me to pay for that now?”
Speaking to 3AW Drive on Wednesday, Fantauzzo said he painted the mural as a way to liven up the previously gloomy area.

“The laneway that I looked at for so long, was so drab and a scary and dirty laneway, I saw it as an opportunity to surprise people.”

.@theheraldsun Cleaners have now gone. A small part of the artwork remains. pic.twitter.com/x2Mv756xX1