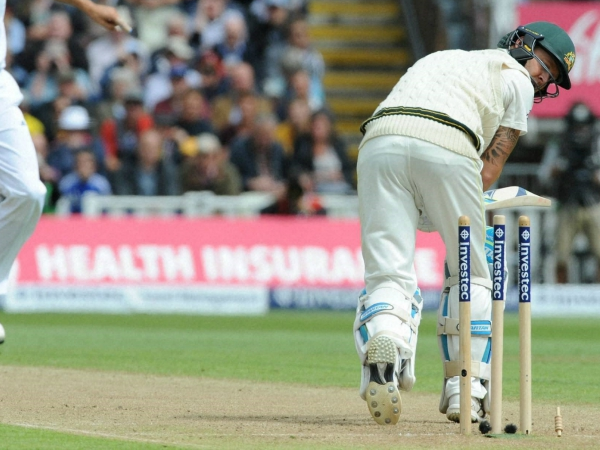 The 2015 Ashes series has so far been characterised by chaos.

There’s been streaky batting and wayward bowling, with stellar individual performances rather than defining team efforts.

The erratic nature of the series has been reflected in the results: a thumping win for Australia at Lord’s, sandwiched by two equally emphatic English wins at Cardiff and Edgbaston.

One thing that has been consistent is the failure of Australia’s middle order to provide any kind of meaningful input on results at all.

The four players who have batted at the 4, 5 and 6 positions in the first three tests – Michael Clarke, Adam Voges, Shane Watson and Mitch Marsh – have all failed to cross an aggregate of 100 runs for the series, even if the output of Marsh and Watson is combined.

It simply hasn’t gone to plan for Australia. Voges was brought in to bring some rigidity to a wobbly middle order, and the century he scored on debut in the Caribbean was a real Boy’s Own tale.

In England, however, he has scored 73 runs at 14.6 and has appeared out of depth, particularly when the ball is swinging.

ABC cricket writer Adam Collins tells upstart that this issue has been around in Australia for some time.

“This isn’t a new problem, the Australian batting line up — specifically the middle order with Steve Smith moving up to three — has been fragile for some time now,” he says.

Despite the almost total lack of form apparent in the middle order, Collins doesn’t think Australia will make bulk changes.

“Shaun Marsh looks the only viable personnel change, it being unlikely that Shane Watson would be drawn on given that his own numbers with the bat at the highest level have been sub-par for a protracted period,” he says.

It will be the form of Michael Clarke that concerns selectors the most. The captain, for so long a linchpin of the Australian batting order, has struggled to make an impact in the UK, with just 94 runs under his belt at an average of 18.8.

Clarke’s movement is stifled by his chronic back injury. The manner of his dismissal at Edgbaston – playing around a straight ball in a manner reminiscent of the wicket that convinced Ricky Ponting it was time to retire — suggests a concerning deterioration of his reflexes.

Exacerbating the issue for selectors is the fact that Clarke is the skipper. Dropping a captain is not done lightly.

It would seem the most likely course of action is for Clarke to move down a spot to bat at five, in an effort to protect him from the newer ball.

“The captain hasn’t been a consistent performer for a long time now, which will increase the temptation to shuffle himself down to the number five position where he lived for the majority of his most productive days,” Collins says.

In regards to Clarke’s plans, Collins says that the skipper’s retirement — when it happens — will be a delicate operation.

“The biggest challenge for selectors will be making sure the timing of Clarke’s departure is well executed,” he says.

“There will be immense pressure to draw the curtain if the Ashes are lost during the next few weeks, but it will be surprising if the captain shared that view. Time will tell.”

Collins also suggested that due to the nature of modern cricket, long-term solutions to Australia’s middle order woes are likely to make players more accustomed to a white ball than white clothes.

“The game is evolving at test level due to the shortest form of the game, which means that players like Glenn Maxwell and even James Faulkner will probably feature in red ball cricket a lot more going forward, and their natural home is the lower-middle order,” he says.

How Australia address their middle order problems will have a huge bearing on the rest of the Ashes series in the short term, and the fortunes of the side in the future.