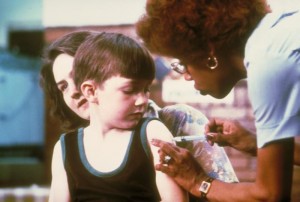 For many of us living in Australia, spending $10 on medicine to fight-off a common cold or virus doesn’t seem like much, but for people in developing countries, $10 is a fortune. Without the resources to pay for medicine, it is easy to fall victim to common health problems. Thankfully, two organisations have come together to make these vaccines more accessible and ultimately bring hope to the future of millions of people.

Fact: in economically under-developed countries in regions such as Asia, Africa and Latin America, poverty and high disease rates are commonplace.

Fact: for these countries the majority of people survive on $1 a day.

Fact: at any given time, close to half of all people in developing countries suffer from a health problem, most commonly caused by water and sanitation deficits. With a low standard of living, these countries cannot afford decent to pay for adequate health systems and consequently, the death-toll continues to rise.

However, perhaps the most alarming figure of all is the number of children that fall victim to ‘Rotavirus’. The virus infects the bowels and is the leading cause of often fatal, dehydrating diarrhoea.

Fact: it is estimated that almost all children have had the infection by the age of five.

More than half a million children each year die from the virus. The majority of these deaths are of children living in developing countries (85 per cent) and, surprisingly, it is also the most common cause of hospital admissions for children under five in Australia.

So, who will save the day?

Recently the Program for Appropriate Technology in Health (PATH) called an Australian team of ‘superhero’ scientists from the Commonwealth Scientific and Industrial Research Organisation (CSIRO) to the rescue. PATH is an international non-profit organisation that is working to increase the accessibility and effectiveness of existing rotavirus vaccines, such as Rotarix and RotaTeq, so that they may be made more affordable and oMf a higher quality and safety level for low-resource countries. Together with the CSIRO Mammalian Cell Culture team, the evil rotavirus disease can be eliminated and once again return the world to a safer place for all.

What superhero traits do the CSIRO team have that can defeat the rotavirus?

The headquarters of this team of scientists plays the key role in producing the vaccine. The Recombinant Protein Production Facility is certainly unique. It is the only non-commercialised laboratory in Australia that can produce the massive amount of antibodies that are needed to test and improve the quality of the new rotavirus vaccines that are being developed. The team can produce enough antibodies to supply PATH for the next five years.

According to Dr George Lovrecz, the group leader for the CSIRO’s protein (antibodies) production ‘the team is confident that their expertise in protein production and working with international companies will help them deliver the antibodies quickly and thus eliminate the virus and save the lives of hundreds of thousands of children in the future.’

‘The team will be producing six antibodies for PATH and the antibodies will be used to test the quality of new rotavirus vaccines being produced,’ he says.

The development of antibodies for rotavirus is not the first contribution CSIRO has made towards improving the health of human kind. The CSIRO developed the ‘Relenza’ drug, the first drug to effectively stop the nasty flu virus that affects as many as 500 million people each year.

Recently, the organisation was also involved in producing the first antibodies against the ‘Hendra’ virus. The virus was first discovered after a horse trainer and his horses in Queensland fell suddenly victim to the illness and died days later. Since its first noted outbreak, it has since taken the lives of four people. The antibodies are a crucial part of developing the vaccine for the virus, and now this new contract with PATH will yet again showcase the skills of the CSIRO and the vital part they play in helping to save the lives of people all around the world.

Dr Lovrecz says: ‘It’s an incredible opportunity to show our skills and demonstrate that not only are we internationally competitive, but it is an opportunity to save children in the worlds poorest countries who may not be able to afford vaccines created by the big pharmaceutical companies. It is an achievement that the CSIRO and Australia can be proud of.’

Although Australia and the CSIRO are only small in stature when compared to big countries such as China, Brazil, and India, as well as health giant, the United States’ National Institutes of Health (PATH’s manufacturing partners), this contract will no doubt help Australia make its mark again on the world stage. In addition, with its creation of the wireless local area network, also known as ‘wifi’, there is no doubt that CSIRO and Australian organisations play a huge role in helping to connect and improve the world we live every day.

The partnership between CSIRO and PATH is just another example of the huge difference that can be made when big corporations work together with non-profit organisations in the fight against evil, to help create a better quality of life for us all.