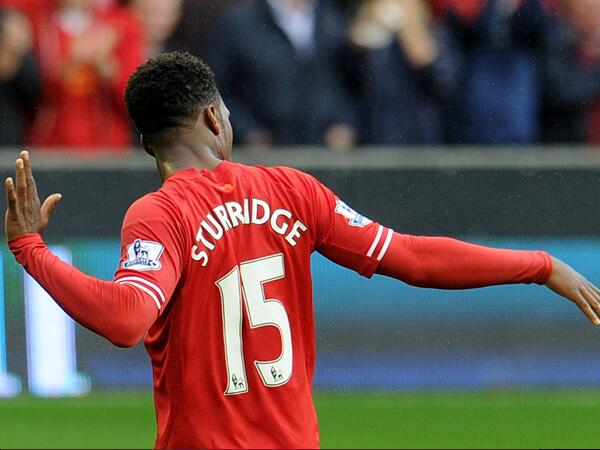 While Luis Suarez has dominated headlines, over the European summer, with his desperate attempts to leave Liverpool, his largely unnoticed teammate Daniel Sturridge has been rapidly improving behind the scenes.

His match-winning strike against Aston Villa, just over a week ago, was a fitting demonstration of his development.

Dancing his way through the Villa penalty area, on his way to goal, it’s hard to see how his excellent goal scoring run could possibly stagnate.

Goals of that nature – intricate, but made to look as simple as shilling peas – are simply not scored by players bereft of confidence or lacking ability.

It was a piece of play that was the signature of a technically gifted athlete ready to flex his proverbial muscles.

Sturridge may not grab the limelight in the same way his Uruguayan teammate Luis Suarez does, off the field, but his figures since making the switch from Chelsea are hard to ignore.

In a Liverpool shirt, the Birmingham born forward has scored 13 Premier League goals from 17 appearances. In context, that means that he currently boasts a superior strike rate to that of last season’s top scorer, Robin Van Persie.

Form of this nature has been a long time coming for Sturridge.

Yet the reason it has taken this star so long to shine, is not down to a famine of self-assurance, nor has he appeared to be burdened by weight of expectation. It’s been a lack of recognition that had seen his career stall.

At Liverpool he is being duly awarded the opportunities he simply wasn’t given at his previous clubs, Manchester City and Chelsea.

Throughout his time at Stamford Bridge, in particular, Sturridge was considered a jack-of-all-trades but a master of none. He was starved of opportunities. When he did play, it was usually out of position – manning a wing or playing too deep.

Bolton saw his potential back in 2012, and he was recruited on loan in the hope that he would rescue its Premier League campaign.

While the Trotters ultimately succumbed to relegation, Sturridge contributed eight Premier League goals from 12 matches, playing primarily as the centre-forward. His loan spell turned out to be an audition of sorts.

Soon after his loan expired, Sturridge signalled his intention to make a similar career move to that of Thierry Henry, back in his Arsenal days – a transition that saw the Frenchman evolve from fleet-footed winger to world-class striker.

His productivity in front of goal at the Reebok stadium was supposed to coax then Chelsea manager Roberto Di Matteo into gifting him more chances as the principal target-man.

However, it didn’t eventuate.

At 23, with his potential languishing, Sturridge needed to push a move through to greener pastures where he would be both valued and tried in his favoured position.

Cue a £12 million move to Anfield. Liverpool was lacking depth up-front and required a player apt at playing anywhere across the front three – Sturridge obliged and has not looked back since.

From the time he arrived in England’s North-West he has relished a role operating both in front of, and around, Suarez, where his ability to convert chances can be aptly exploited.

However, with Suarez currently serving a lengthy ban, Sturridge has warmly welcomed the responsibility of being Liverpool’s primary target-man, especially given his lack of opportunities in the past.

Already with three spectacular finishes arriving in as many games this season, he is seizing the opportunity to play as the lone striker for a club aiming to push its claim for a 19th domestic title.

HAPPY BIRTHDAY to @LFC striker Daniel Sturridge – 24 today. He has scored 8 in the past 7 #BPL matches #LIVMUN pic.twitter.com/Ng6WUEZ0Ky

Added exposure has seen elements of his game unbeknownst to many previously now coming to the fore.

Always recognised as agile and quick, Sturridge has also shown an added strength and ability to hold the play up: a hallmark of a successful centre-forward, and an attribute he was deemed to have lacked by many at his previous clubs.

When his influence was at one stage over overlooked by opposition defenders in favour of more dangerous teammates, it is now scrutinised to the nth–degree. Once a provider of chances and a foil for his team’s marksmen, he is now the diminutive poacher who demands his own precise service.

It would be a stretch to consider Sturridge a world-beater at this stage of his career, but he has shown a decisiveness and reliability for an extended period of time, that suggests he is well on his way to fulfilling his lofty potential.

Now that he has recognition, he must continue to deliver so that he reaches the heights long expected of him.