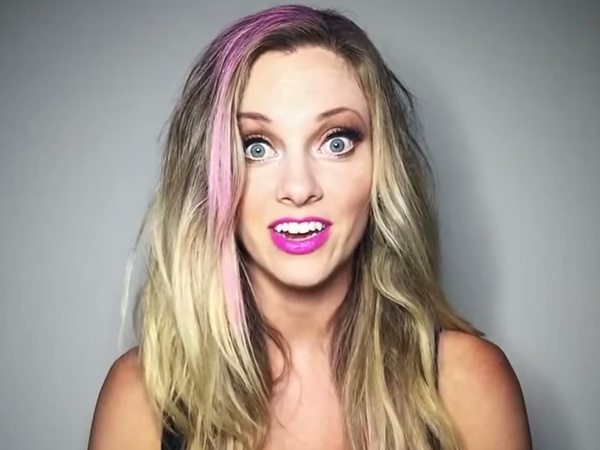 Chances are you didn’t know who she was until a few days ago.

“Fat shaming is not a thing, that’s just something fat people made up,” the Canadian said in the video.

The video has amassed more than 21 million views since it was uploaded over the weekend.

However, the video has primarily been shared out of outrage.

Knowledge of good nutrition is a privilege, just as much as is having healthy food at your fingertips. #DearFatPeople

There’s a fine line between using sarcasm for the sake of comedy and BEING A DOUCHE. #DearFatPeople — Mora (@moritafre) September 9, 2015

Arbour’s sarcasm continued on social media, posting updates about her contribution to humanity.

I’ve received so many thanks messages from obese and overweight taking shit into their own hands now. #FeelingProud #GOTEAM — Nicole Arbour (@NicoleArbour) September 4, 2015

She eventually began to defend her video, posting to Twitter about the right to free speech.

If I disable comments on something, it doesn’t mean I’m scared, it means I don’t give a fuk what u have 2 say.💁🏼 #TrollTheTrolls #TrollGate — Nicole Arbour (@NicoleArbour) September 5, 2015

No one can hurt you without your permission. 😉👊🏻 #GOTEAM #Laugh — Nicole Arbour (@NicoleArbour) September 7, 2015

The reason there’s an issue is because I don’t “look” like a traditional comedian. If I were a guy, people would have lol’d n moved on.

In the wake of the social media storm, reports began emerging that YouTube had suspended Arbour’s account and that the video had been removed from Facebook.

This prompted the comedian to create a follow up video.

Arbour blames “keyboard warriors”, who “are the new terrorists” and are “trying to murder comedy”, for the exaggerated hype of her initial six-minute YouTube rant.

“You have to be really slow to be offended by satire,” she said.

“Only you can save comedy for future generations… make fun of your friends equally, because an entire generation that’s scared to make jokes is a generation of pus****.”

However, the response generated by Arbour’s video is seemingly exactly what she’d anticipated.

“Aaahhh, some people are already mad at this video!” she said at the start of the ‘Dear Fat People’ clip.

Arbour’s video has launched her into a new realm of online stardom, something so many YouTubers strive for.

Those in opposition of Arbour say that ‘fat-shaming’ won’t help combat obesity, and is instead a cruel and immoral behaviour.

Responses to the video have also gone viral on YouTube, some earning over 200,000 views.

Comedians are constantly skating on thin ice when it comes to political correctness.

Earlier this year, Jim Jeffries received backlash for making rape jokes at his show in Brisbane.

In 2012, actress and comedian, Sarah Silverman, was criticised following her Tweets regarding “quickie” abortions.

Columnist, Helen Razer, said the ‘offence debate’ is ruining the audience’s right not to be offended.

“The comedian and the audience must allow themselves freedom from the orthodoxies of the everyday. If we are to have Stanhopes or Silvermans and the thrilling laughter such people provide, we must all be prepared to take a risk,” she said.

“If we all insist on sticking within the limits of real life, we can never inhabit the limitless possibilities of art.”

Whether Arbour’s video can be classified as ‘art’ is questionable, however, she does have the right to speak freely and to share her opinions with the world.