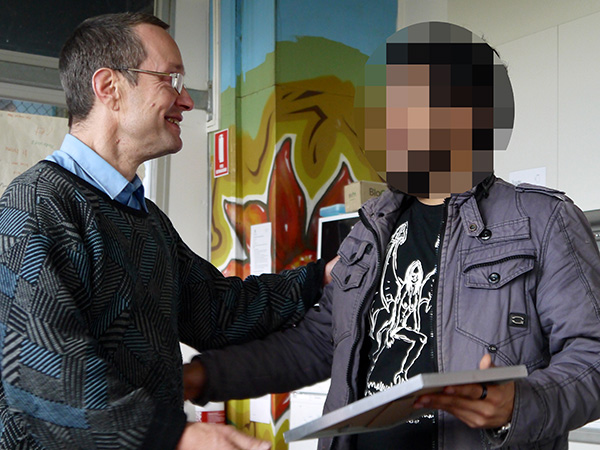 A 24-year-old asylum seeker that upstart has chosen not to name, says he spent about 100 days in detention on Christmas Island and more than two months at the Northern Immigration Detention Centre in Darwin.

In March 2013, he was granted a bridging visa and sent to Adelaide, a transition he describes as “a nightmare”.

Two years later, he is living in Melbourne’s southeast. He is still waiting for his bridging visa to be processed and, until this happens, he is unable to work or study.

“[WHASP is] a great chance for refugees, for asylum seekers, other people like me. It’s giving me a second chance, a second chance of life in Australia,” he says.

Robert Akeroyd, the founder of WHASP, has run 12 picnics in suburbs of Melbourne since February 2014 in an effort to promote empathy for refugees through direct interaction.

“My purpose is to free refugees from hopelessness, despair and depression, so they may lead lives of peace, joy and achievement,” Akeroyd tells upstart.

“Our goal is to give as many Australians as possible an opportunity to develop a friendship with a refugee or get to know a refugee better,” he says.

Dwain and Jane Dawes met the asylum seeker at a WHASP event in Dandenong last year. They now consider him to be part of their family.  The Dawes family and the unnamed asylum seeker say their relationship has grown through the organisation, and encourage others to get involved.

“You never know who you’re going to meet and how many lives might change as you are stepping outside your comfort zone and… giving asylum seekers the time of day to learn about them,” Dwain told the group of picnickers.

“They just accept me, open and free, in their family, accept me as one of their family members,” the asylum seeker told the group shortly after.

WHASP aims to be facilitating 10,000 picnics per year by 2023, according to their 10-year strategy. Akeroyd also plans to run “light-hearted MasterChef competitions” for refugees and Australian residents to sample and learn about each others’ cuisine.

Akeroyd says he put the WHASP strategy together four years ago when he was the room facilitator for the Landmark Self-Expression and Leadership Program, which teaches people how to start community projects.

While the picnics are free for asylum seekers, others are encouraged to donate at least eight dollars to cover the costs of running and promoting the picnics. Additional donations are currently going towards Stone the Boats, a theatre event by Candlelight Productions.

Stone the Boats “tells some of the untold stories of asylum seekers, politicians, policy makers, detention centre workers, and ‘ordinary’ Australians” and aims to promote better understanding between these groups.

One of WHASP’s goals is to create a better bond between Australian residents and asylum seekers, in order to debunk some of the myths surrounding asylum seekers.

Welcome Home Asylum Seeker Picnics will be held on one Sunday a month in Atherton Gardens Estate in Fitzroy for the rest of the year.