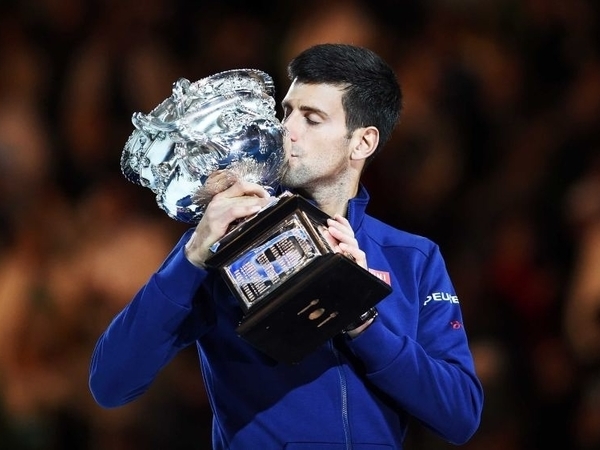 The sporting world has been blessed with the calibre of men’s tennis in recent years, witnessing sublime, all-conquering displays from three of the sport’s greatest of all time in Roger Federer, Rafael Nadal and Novak Djokovic.

But it’s the latter who’s taken the racquet sport by the scruff of the neck in the last 18 months and catapulted himself further into the conversation.

Discount the marvels of yesteryear – Bjorn Borg, Rod Laver and Pete Sampras to name a few – indulge in the modern-day conversation and, until recently, you’ll likely fixate on one name: Federer.

But Djokovic’s exploits since 2011 has some believing he’s better than the Swiss maestro or at least posing the question given his dominating run on the way to 11 major titles at the peak age of 28.

Such is his current supremacy on the competition, 1116 SEN broadcaster and tennis aficionado, Brett Phillips, believes the gap between Djokovic and the rest is as big as it’s ever been.

“Right now, at his absolute peak, there’s a massive gap between Djokovic and number two and three, and there’s probably another gap to number four. If you’re sitting at nine and ten than you’ve got no hope but he’s number one by a long way at the moment,” Phillips tells Upstart.

“If he keeps going like this and plays at his peak, he could probably average three of the four slams for a couple of years. I think we’ve always said Federer is the greatest of all time but that conversation might change because Djokovic is six years younger and only six majors behind. So if he stays fit and healthy, he could well surpass Federer.”

Overtaking Federer seems to have become a question of when rather than if for the Serbian, and it’s hard to see the 34-year-old Federer adding to this tally with Novak at the top of his game.

But while six majors might not seem like much, when Federer was Djokovic’s age, he had just won his 16th title – a phenomenal difference at the same stage of their careers.

What works in Novak’s case, however, is lack of opposition nipping at his heels, ready to knock him off the perch at the moment. While comparing the pairs’ opposition is a complicated task, the 2010 Federer was about to be surpassed by long-time rival Nadal with Djokovic also to begin a king-slaying run.

But banking on Djokovic’s outcomes could be problematic. Given Federer has won only one Grand Slam since turning 29, it shows how sharply players can fall from the top – just ask Nadal, who was in a similar position to Djokovic before his body began to give way in 2014.

Simply put, if Djokovic retired tomorrow or failed to win another major, would we be satisfied in calling him the greatest of all time? Probably not.

As the season wears on, Phillips says the next couple of years will shape Novak’s standing among the greats, but believes there’s an element of Roger that may never be overcome.

“If he stays fit, the next two years is the time where he needs to cash in. He hasn’t won the French Open having been a three time runner-up there but he’s been able to dominant the others in recent years. By the end of his career he could be better than Federer.

“But I think Federer was better at the peak of his powers. Even if Djokovic passed Federer statistically with more majors, I think people will still look back and see Roger the way we’re seeing Serena Williams – she hasn’t passed Steffi Graff for majors – but people are already saying Serena is the greatest female tennis player ever without the stats.

“They might still say that about Federer considering his style of play, he’s so graceful and elegant and make tennis look so easy. Aesthetically, Federer is probably better to watch than Djokovic.

“Novak is pretty clinical, he’s not the best forehand or best serve but he’s got that solid all-court and hardly makes any errors. I still think Federer will go down as the greatest of all time in some people’s eyes in the way he plays the game.”

Robert Beaton is a third-year Bachelor of Journalism (Sport) student at La Trobe University. You can follow him on twitter: @BobbyBeaton16