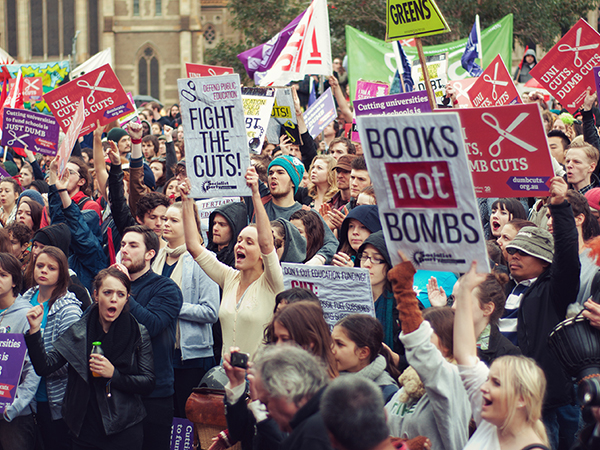 Over 1,000 students, educators and supporters rallied in Melbourne yesterday to show their contempt for university funding cuts.

Part of a national day of action, protests were held throughout Australia in response to the Gillard Government’s plan to slash $2.3 billion from tertiary funding.

Unfortunately, the federal budget announcement did not bring the news they were hoping for.

$2.8 billion has been allocated to schools, comprised almost entirely of funding commandeered from universities. This will increase funding for primary and secondary schools under the Gonski reforms.

University students will now be required to repay government funded start-up scholarships that have been converted to loans, while early-payment discounts have been dropped from HECS-HELP debts.

The only consolation to oppositions of the cuts is the fact the budget brought no surprises when it came to education.

In contrast to the maligned cuts, Treasurer Wayne Swan also announced a $186 million boost to research infrastructure and a $97 million boost to Commonwealth funded places, but this did little to assuage the concerns of students.

Protestors called on federal members of parliament to oppose further cuts to higher education to prevent a system of “corporate universities”.

Outside Melbourne’s State Library, Victorian College of the Arts students gave a rendition of the song, “Do You Hear The People Sing” from Les Miserables, rousing the crowd to begin their pilgrimage.

The bellowing crowd swarmed down Swanston St, armed with signs, banners and even cardboard coffins signifying the death of education. They marched to Federation Square, unperturbed by the rain and chanting all the way.

“No cuts, no fees, no corporate universities.”

“Bulls**t, come off it, our education is not for profit.”

The cries of frustrated students echoed around the city. 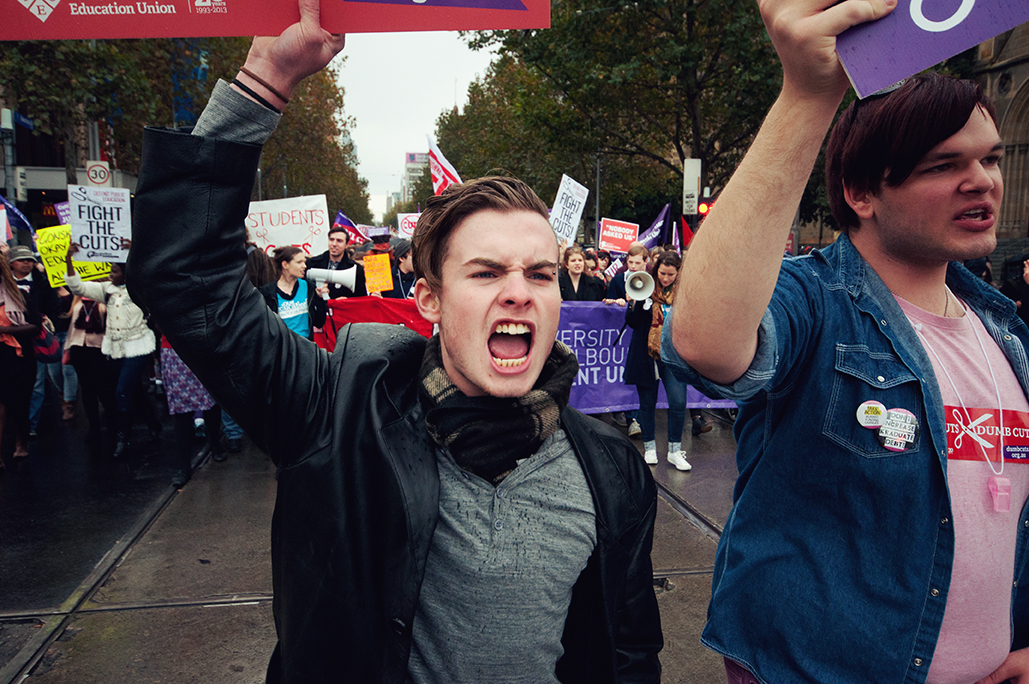 Co-chair of the event, Sarah from the Monash Students Association congratulated Victoria on its biggest student rally in almost a decade.

“We’re here because our education has been decimated for decades in this country,” she said.

“Australia has one of the most privatised university sectors in the whole world.”

“As a high school student, university has always been a dream of mine but that dream has never felt further away,” he said.

With the significant funding cuts to universities he is left asking whether he will even be able to afford a university education.

“More than $4 billion has been slashed from higher education federal budget allocations since 2011.

“These dumb cuts don’t make for a smart country,” Ms Rea said in a statement.

While the Sydney protest turned violent with one man suffering a broken leg, Victoria Police said the Melbourne rally was incident free.

With universities hit the hardest in the budget, the government is pitting entities of the public sector against one another. High school students who benefit from their influx of funding will wear the burden in years to come. In education vs education, no one wins.